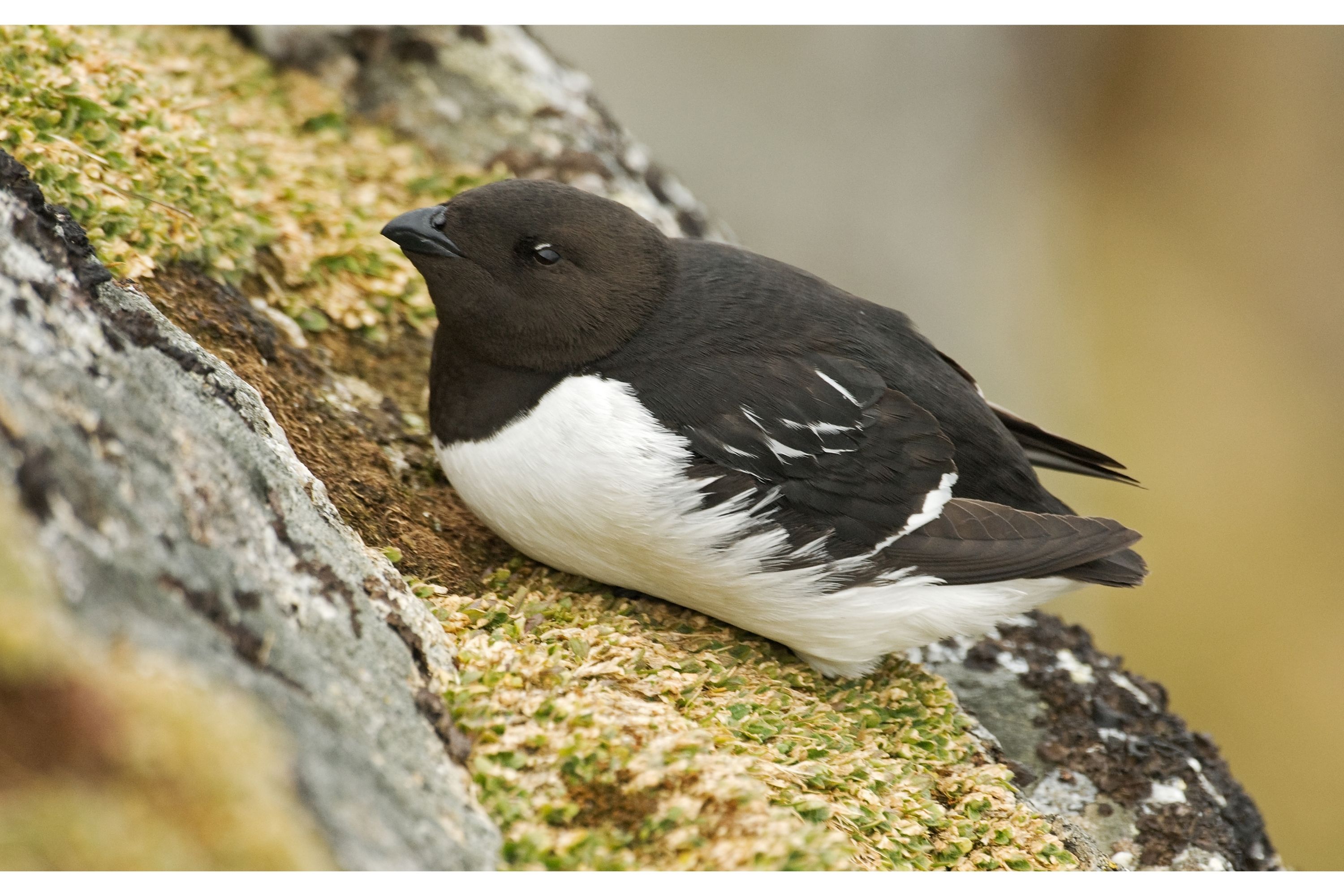 The little auk or dovekie (Alle alle) is a small auk, the only member of the genus Alle. Alle is the Sami name of the long-tailed duck; it is onomatopoeic and imitates the call of the drake duck. Linnaeus was not particularly familiar with the winter plumages of either the auk or the duck, and appears to have confused the two species. Other common names include rotch, rotche, and sea dove, although this last sometimes refers to a different auk, the Black Guillemot, instead. It breeds on islands in the high Arctic. There are two subspecies: A. a. alle breeds in Greenland, Novaya Zemlya and Svalbard, and A. a. polaris on Franz Josef Land. A small number of individuals breed on Little Diomede Island in the Bering Strait with additional breeding individuals thought to occur on King Island, St. Lawrence Island, St. Matthew Island and the Pribilof Islands in the Bering Sea. This is the only Atlantic auk of its size, half the size of the Atlantic puffin at 19–21 cm in length, with a 34–38 cm wingspan. The dovekie's weight ranges from 4.7 to 7.2 oz (134-204 g). Adult birds are black on the head, neck, back and wings, with white underparts. The bill is very short and stubby. They have a small rounded black tail. The lower face and fore neck become white in winter. The flight is direct, with fast whirring wing beats due to the short wings. These birds forage for food like other auks by swimming underwater. They mainly eat crustaceans, especially copepods, of which a 150 g bird require ~60,000 individuals per day (equivalent to 30 g of dry food weight), but they can also eat small invertebrates and fish. Recent evidence suggests that the little auk feeds not by filter-feeding, but by visually guided suction-feeding. They feed closer to the shoreline during nesting season, but when not nesting they scavenge for food in the open-ocean. Little auks produce a variety of twitters and cackling calls at the breeding colonies, but are silent at sea. Little auks breed in large colonies on marine cliffsides. They nest in crevices or beneath large rocks, usually laying just a single egg. They move south in winter into northern areas of the north Atlantic. Late autumn storms may carry them south of their normal wintering areas, or into the North Sea. The species is also commonly found in the Norwegian Sea. The glaucous gull and the Arctic fox are the main predators on little auks. In some cases, the polar bear has also been reported to feed on little auk eggs.