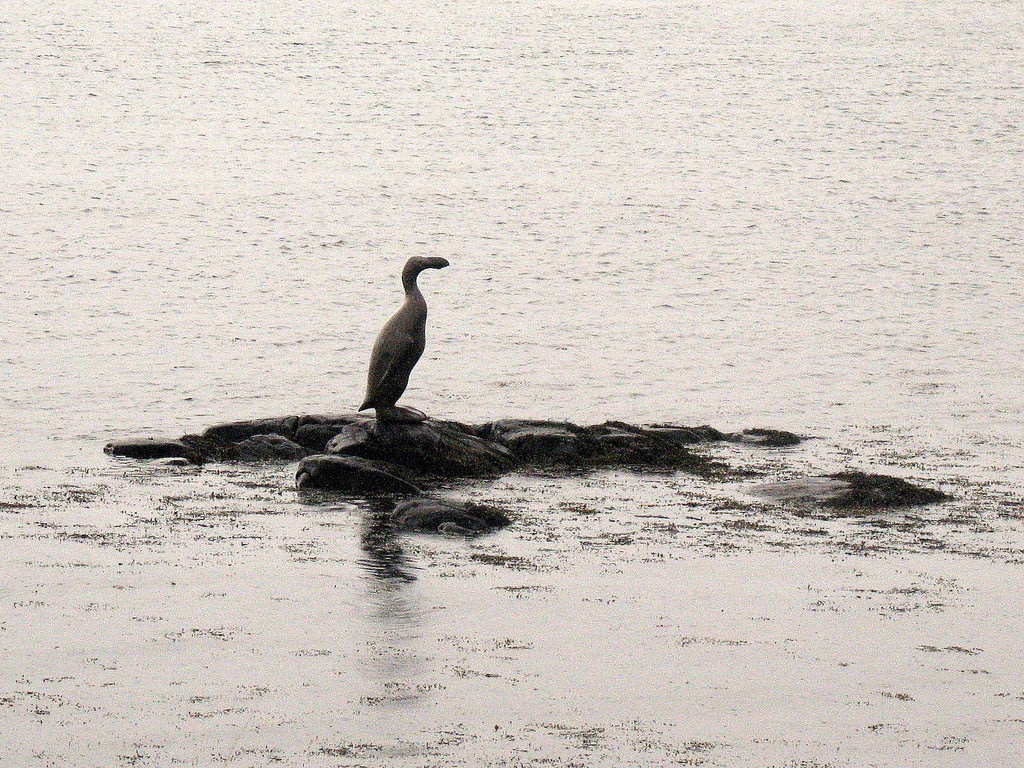 The great auk (Pinguinus impennis) is a species of flightless alcid that became extinct in the mid-19th century.It was the only modern species in the genus Pinguinus.It is unrelated to the birds now known as penguins,which were discovered later and so named by sailors because of their physical resemblance to the great auk.Standing about 75 to 85 centimetres (30 to 33 in) tall and weighing approximately 5 kilograms (11 lb) as adult birds,the flightless great auk was the second-largest member of both its family and the order Charadriiformes,surpassed only by the mancalline Miomancalla.The great auks that lived farther north averaged larger in size than the more southerly members of the species.Males and females were similar in plumage,although there is evidence for differences in size,particularly in the bill and femur length.The back was primarily a glossy black,and the belly was white.The neck and legs were short,and the head and wings small.The great auk appeared chubby due to a thick layer of fat necessary for warmth.During summer,it developed a wide white eye patch over each eye,which had a hazel or chestnut iris.During winter the great auk moulted and lost this eye patch,which was replaced with a wide white band and a gray line of feathers that stretched from the eye to the ear.During the summer,the its chin and throat were blackish-brown and the inside of the mouth was yellow.In winter,the throat became white.Some individuals reportedly had grey plumage on their flanks,but the purpose,seasonal duration,and frequency of this variation is unknown.The bill was large at 11 centimetres (4.3 in) long and curved downward at the top;the bill also had deep white grooves in both the upper and lower mandibles,up to seven on the upper mandible and twelve on the lower mandible in summer,although there were fewer in winter.The wings were only 15 centimetres (5.9 in) in length and the longest wing feathers were only 10 centimetres (3.9 in) long.Its feet and short claws were black,while the webbed skin between the toes was brownish black.The legs were far back on the bird's body,which gave it powerful swimming and diving abilities.