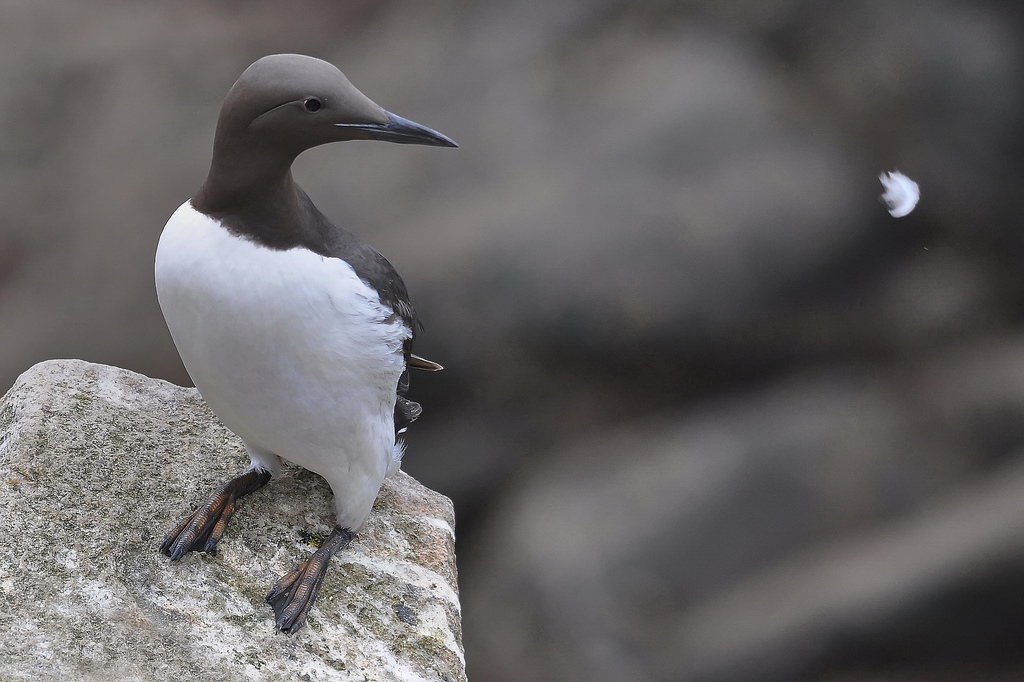 The common murre or common guillemot (Uria aalge) is a large auk.It is also known as the thin-billed murre in North America.It has a circumpolar distribution,occurring in low-Arctic and boreal waters in the North Atlantic and North Pacific.It spends most of its time at sea,only coming to land to breed on rocky cliff shores or islands.The common murre is 38–46 cm (15–18 in) in length with a 61–73 cm (24–29 in) wingspan.Male and female are indistinguishable in the field and weight ranges between 945 g (2.083 lb) in the south of their range to 1,044 g (2.302 lb) in the north.A weight range of 775–1,250 g (1.709–2.756 lb) has been reported.In breeding plumage,the nominate subspecies (U.a.aalge) is black on the head,back and wings,and has white underparts.It has thin dark pointed bill and a small rounded dark tail.After the pre-basic moult,the face is white with a dark spur behind the eye.Birds of the subspecies U.a.albionis are dark brown rather than black,most obviously so in colonies in southern Britain.Legs are grey and the bill is dark grey.Occasionally,adults are seen with yellow/grey legs.In May 2008,an aberrant adult was photographed with a bright yellow bill.The plumage of first winter birds is the same as the adult basic plumage.However,the first pre-alternate moult occurs later in the year.The adult pre-alternate moult is December–February,(even starting as early as November in U.a.albionis).First year birds can be in basic plumage as late as May,and their alternate plumage can retain some white feathers around the throat.Some individuals in the North Atlantic,known as "bridled guillemots",have a white ring around the eye extending back as a white line.This is not a distinct subspecies,but a polymorphism that becomes more common the farther north the birds breed—perhaps character displacement with the northerly thick-billed murre,which has a white bill-stripe but no bridled morph.The white is highly contrasting especially in the latter species and would provide an easy means for an individual bird to recognize conspecifics in densely packed breeding colonies.The chicks are downy with blackish feathers on top and white below.By 12 days old,contour feathers are well developed in areas except for the head.At 15 days,facial feathers show the dark eyestripe against the white throat and cheek.