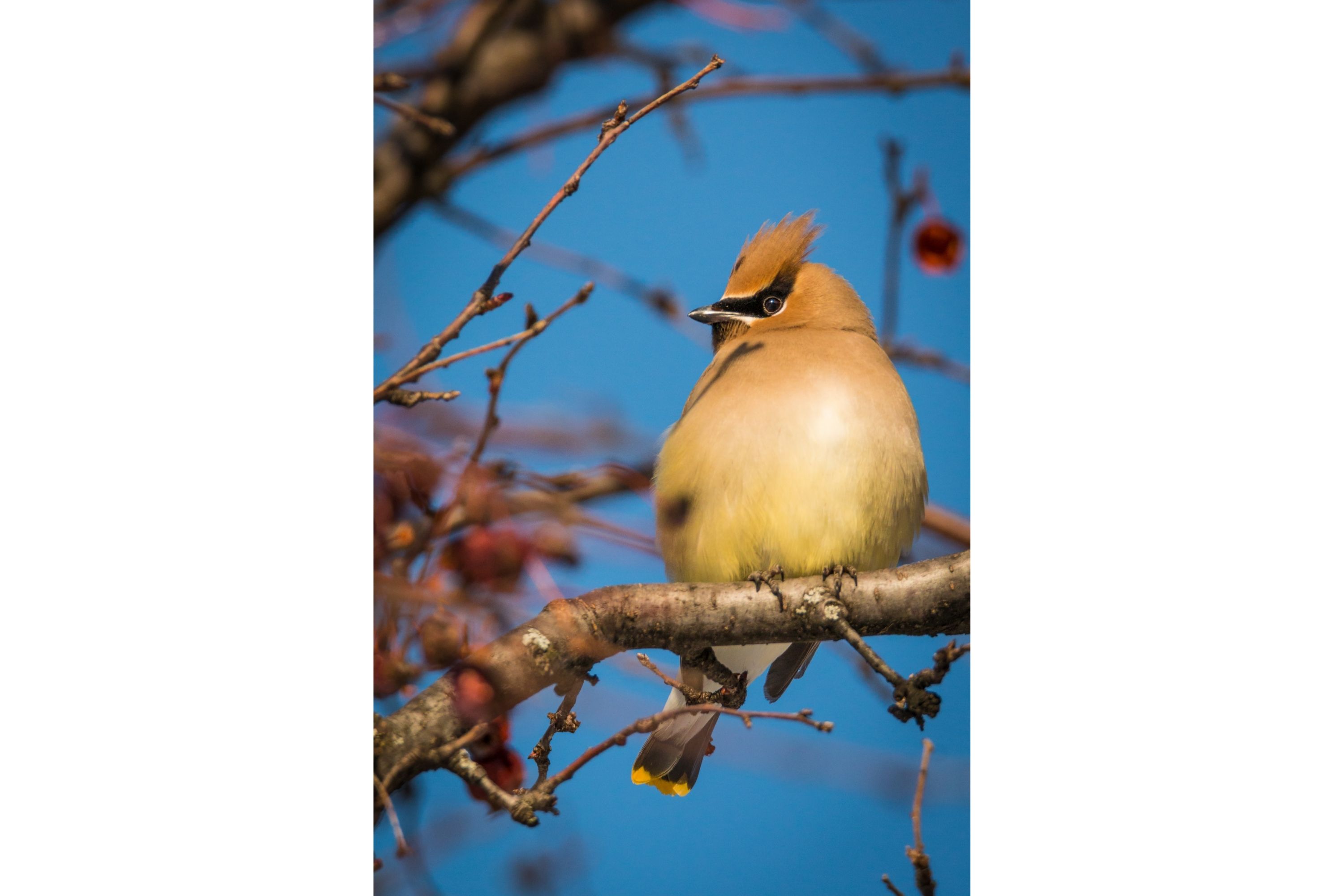 The cedar waxwing (Bombycilla cedrorum) is a member of the family Bombycillidae or waxwing family of passerine birds. It is a medium-sized, mostly brown, gray, and yellow. This bird is named for its wax-like wing tips. It is a native of North and Central America, breeding in open wooded areas in southern Canada and wintering in the southern half of the United States, Central America, and the far northwest of South America. Its diet includes cedar cones, fruit, and insects. The cedar waxwing is listed as least concern on the IUCN Red List. The genus name Bombycilla comes from the Ancient Greek bombux, "silk" and the Modern Latin cilla, "tail"; this is a direct translation of the German Seidenschwanz, "silk-tail", and refers to the silky-soft plumage of these birds. The specific cedrorum is Latin for "of the cedars". Cedar waxwings are medium-sized birds approximately 6–7 in (15–18 cm) long and weighing roughly 30 g (1.1 oz). Wingspan ranges from 8.7-11.8 in (22-30 cm). They are smaller and browner than their close relative, the Bohemian waxwing (which breeds farther to the north and west). Their markings are a "silky, shiny collection of brown, gray, and lemon-yellow, accented with a subdued crest, rakish black mask, and brilliant-red wax droplets on the wing feathers." These droplets may be the same color as the madrone berries they are known to eat. These birds' most prominent feature is this small cluster of red wax-like droplets on tips of secondary flight feathers on the wings, a feature they share with the Bohemian waxwing (but not the Japanese waxwing). These wax-like droplets are attributed to the pigmented and medullary layers of the secondary tip being surrounded by a transparent cuticle. The wings are "broad and pointed, like a starling's." The tail is typically yellow or orange depending on diet. Birds that have fed on berries of introduced Eurasian honeysuckles while growing tail feathers will have darker orange-tipped tail-feathers. The tail is somewhat short, and square-tipped. Adults have a pale yellow belly. The waxwing's crest often "lies flat and droops over the back of the head." It has a short and wide bill. The waxwing's black mask has a thin white border. Immature birds are streaked on the throat and flanks, and often do not have the black mask of the adults. Males and females look alike.