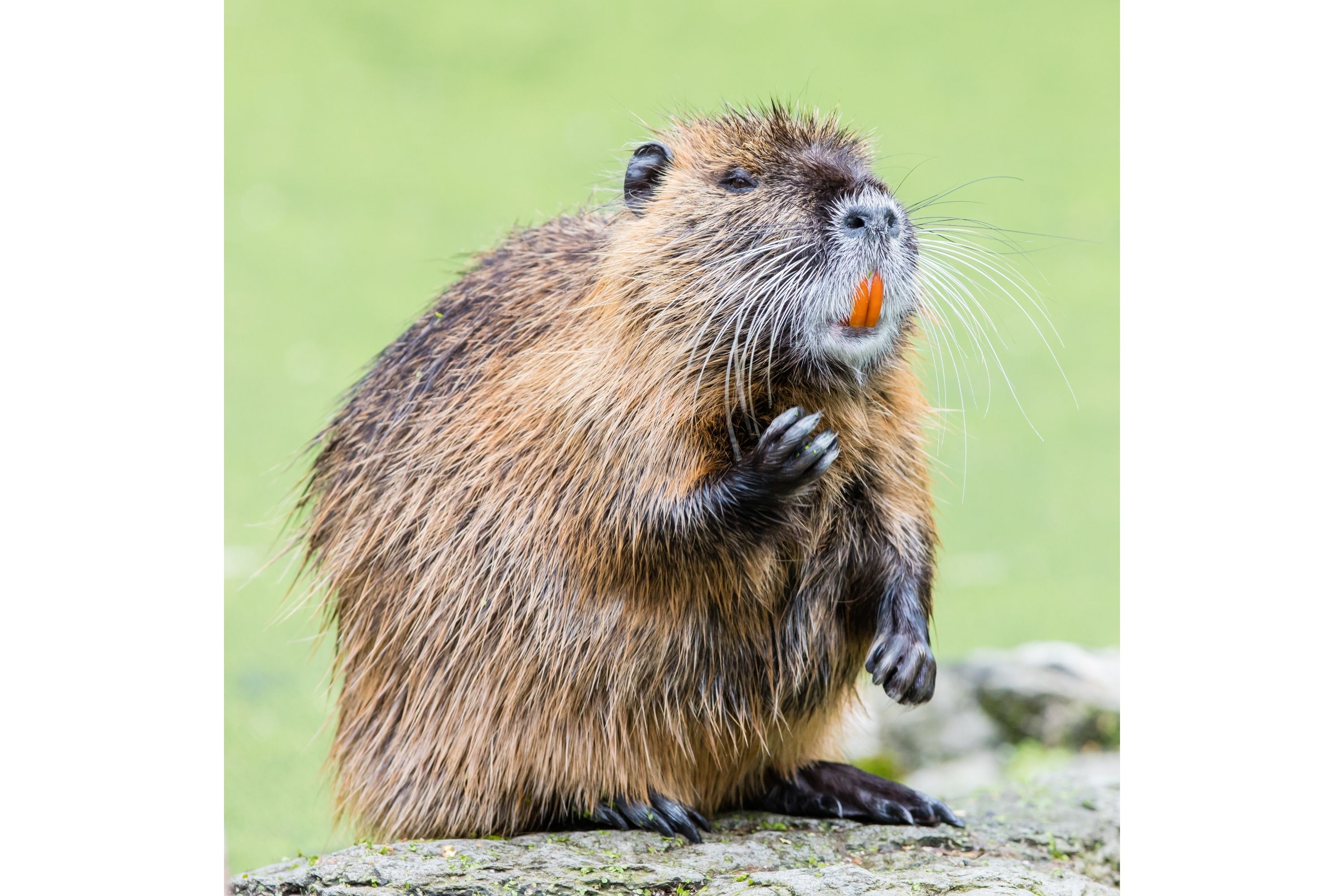 The nutria (Myocastor coypus), also known as the coypu, is a large, herbivorous, semiaquatic rodent. Classified for a long time as the only member of the family Myocastoridae,Myocastor is now included within Echimyidae, the family of the spiny rats. The nutria lives in burrows alongside stretches of water, and feeds on river plant stems. Originally native to subtropical and temperate South America, it has since been introduced to North America, Europe, Asia, and Africa, primarily by fur farmers. Although it is still hunted and trapped for its fur in some regions, its destructive burrowing and feeding habits often bring it into conflict with humans, and it is considered an invasive species. The genus name Myocastor derives from the two Ancient Greek words μῦς (mûs), meaning "rat, mouse", and κάστωρ (kástōr), meaning "beaver". Literally, therefore, the name Myocastor means "mouse beaver". Two names are commonly used in English for Myocastor coypus. The name "nutria" (from Spanish word nutria, meaning 'otter') is generally used in North America, Asia, and throughout countries of the former Soviet Union; however, in most Spanish-speaking countries, the word "nutria" refers primarily to the otter. To avoid this ambiguity, the name "coypu" or "coipo" (derived from the Mapudungun language) is used in South America and parts of Europe. In France, the nutria is known as a ragondin. In Dutch, it is known as beverrat (beaver rat). In German, it is known as Nutria, Biberratte (beaver rat), or Sumpfbiber (swamp beaver). In Italy, instead, the popular name is, as in North America and Asia, "nutria", but it is also called castorino ("little beaver"), by which its fur is known in Italy. In Swedish, the animal is known as sumpbäver (marsh/swamp beaver). In Brazil, the animal is known as ratão-do-banhado (big swamp rat), nútria, or caxingui (the last from the Tupi language). A nutria is often mistaken for a muskrat (Ondatra zibethicus), another widely dispersed, semiaquatic rodent that occupies the same wetland habitats. The muskrat, however, is smaller and more tolerant of cold climates, and has a laterally flattened tail it uses to assist in swimming, whereas the tail of a nutria is round. It can also be mistaken for a small beaver, as beavers and nutrias have very similar anatomies. However, beavers' tails are flat and paddle-like, as opposed to the round tails of coypus