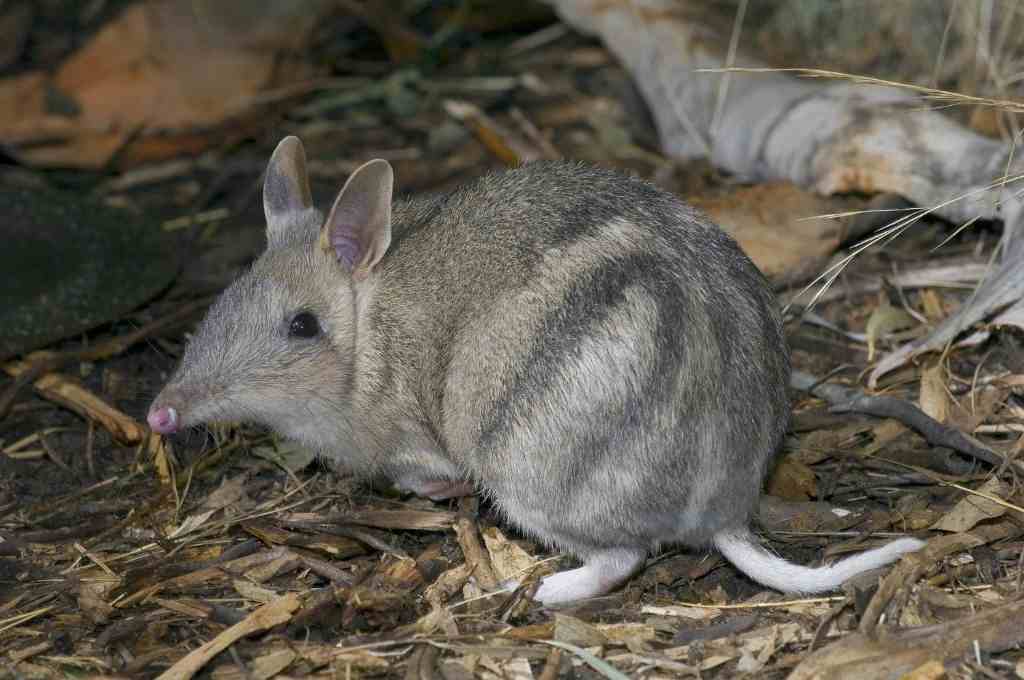 The eastern barred bandicoot (Perameles gunnii) is a small,rabbit-sized marsupial native to Tasmania and Victoria,southeastern Australia.It is one of three extant bandicoot species in the genus Perameles.The eastern barred bandicoot weighs less than 2 kg (4.4 lb) and has a short tail and three to four whitish bars across the rump.The Eastern barred bandicoot has two separated populations,one on the mainland of Australia and one on the island of Tasmania.The Tasmanian form is somewhat larger than the mainland form as the average adult mass is 750 g in Victoria and 1,000 g in Tasmania.It lives for just two to three years and is not gregarious.Males occupy large home ranges compared to females and only consort with females for mating.This species is nocturnal.It emerges from its nest at dusk to forage for a variety of invertebrates including crickets,beetles and earthworms.During the day it rests in a grass-lined nest.When foraging,it uses its long nose to probe deep into the soil and then digs eagerly when it locates food.Females have 8 nipples and can produce a maximum of 5 young in one litter with an average of 2 to 3 young.Gestation lasts just 12 days—this is one of the shortest gestation periods of any mammal.Young are weaned at 55 days and emerged juveniles remain dependent upon the mother and forage with her until day 86.Given ideal conditions,females can have up to five litters per year although reproduction becomes depressed in summer and ceases altogether in times of drought