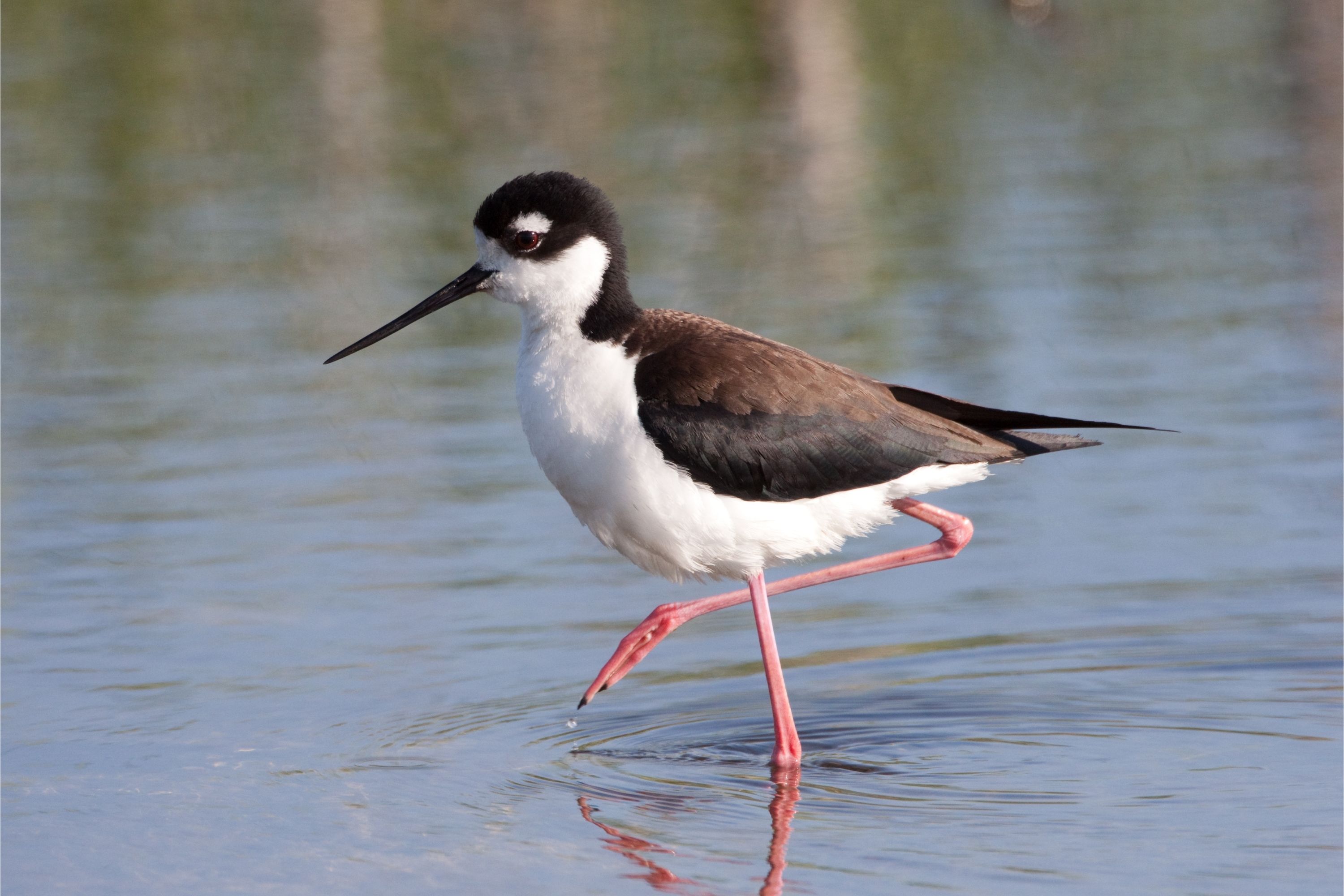 The black-necked stilt (Himantopus mexicanus) is a locally abundant shorebird of American wetlands and coastlines. It is found from the coastal areas of California through much of the interior western United States and along the Gulf of Mexico as far east as Florida, then south through Central America and the Caribbean to Ecuador and the Galápagos Islands. The northernmost populations, particularly those from inland, are migratory, wintering from the extreme south of the United States to southern Mexico, rarely as far south as Costa Rica; on the Baja California peninsula it is only found regularly in winter. Length: 13.8–15.3 in (35–39 cm) Weight: 5.3–6.2 oz (150–180 g) Wingspan: 28.1–29.7 in (71–75 cm) They have long pink legs and a long thin black bill. They are white below and have black wings and backs. The tail is white with some grey banding. A continuous area of black extends from the back along the hind neck to the head. There, it forms a cap covering the entire head from the top to just below eye-level, with the exception of the areas surrounding the bill and a small white spot above the eye. Males have a greenish gloss to the back and wings, particularly in the breeding season. This is less pronounced or absent in females, which have a brown tinge to these areas instead. Otherwise, the sexes look alike. Downy young are light olive brown with lengthwise rows of black speckles (larger on the back) on the upperparts essentially where adults are black and dull white elsewhere, with some dark barring on the flanks. Where their ranges meet in central Brazil, the black-necked and white-backed stilts intergrade. Such individuals often have some white or grey on top of the head and a white or grey collar separating the black of the hindneck from that of the upper back. The black-necked stilt is distinguished from non-breeding vagrants of the black-winged stilt by the white spot above the eye. Vagrants of the northern American form in turn are hard to tell apart from the resident Hawaiian stilt, in which only the eye-spot is markedly smaller. But though many stilt populations are long-distance migrants and during their movements can be found hundreds of miles offshore, actual trans-oceanic vagrants are nonetheless a rare occurrence.