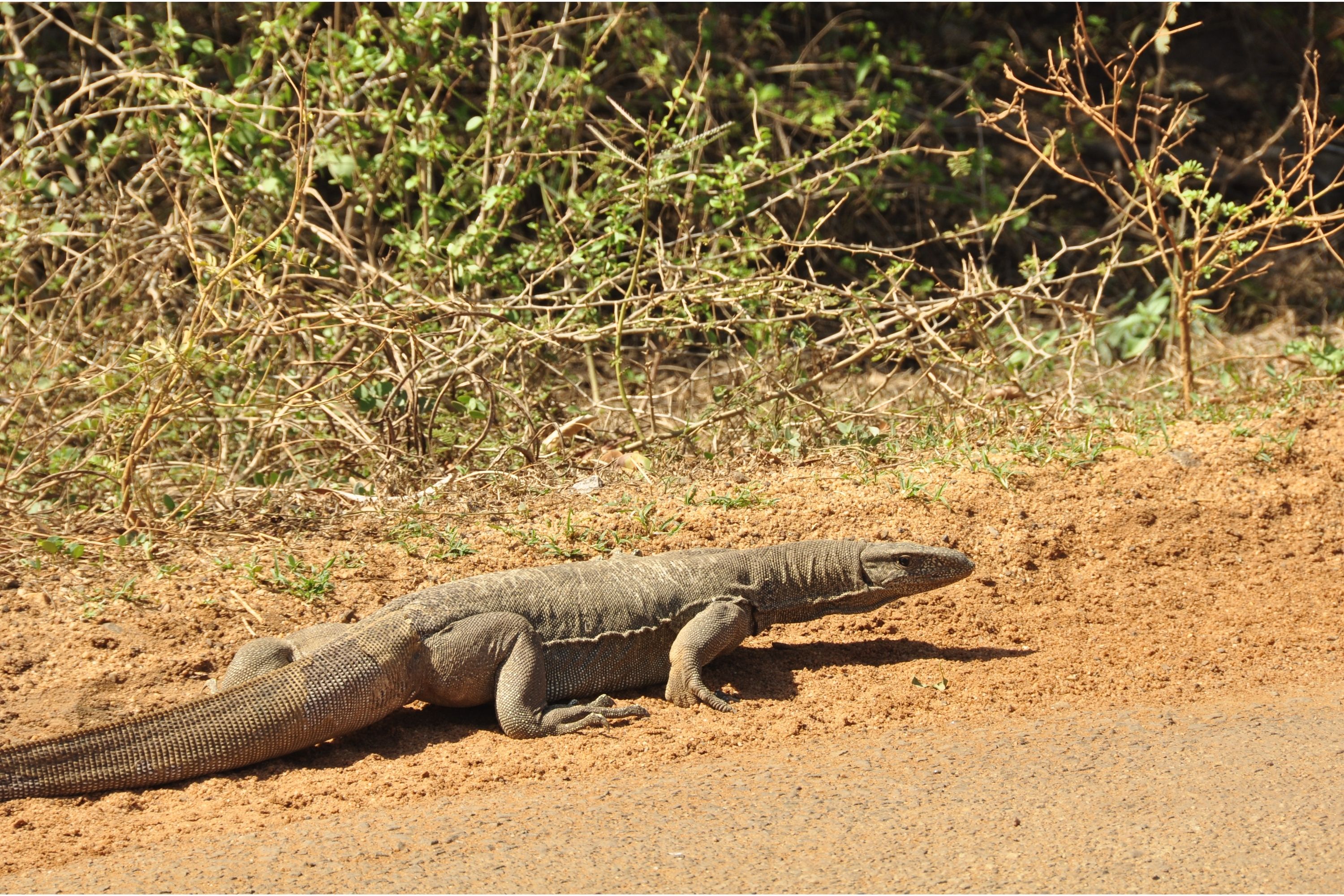 The Bengal monitor or common Indian monitor (Varanus bengalensis) is a monitor lizard distributed widely in the Indian Subcontinent, as well as parts of Southeast Asia and West Asia. This large lizard is mainly a terrestrial animal, and its length ranges from about 61 to 175 cm (24 to 69 in) from the tip of the snout to the end of the tail. Young monitors may be more arboreal, but adults mainly hunt on the ground, preying mainly on arthropods, but also taking small terrestrial vertebrates, ground birds, eggs and fish. Although large Bengal monitors have few predators apart from humans who hunt them for meat, younger individuals are hunted by many predators. The Bengal monitor can reach 175 cm with a snout-to-vent length (SVL) of 75 cm and a tail of 100 cm. Males are generally larger than females. Heavy individuals may weigh nearly 7.2 kg. The populations of monitors in India and Sri Lanka differ in the scalation from those of Myanmar; these populations were once considered subspecies of the Bengal monitor, but are now considered two species within the V. bengalensis species complex. What was once the nominate subspecies, V. bengalensis, is found west of Myanmar, while the clouded monitor (V. nebulosus) is found to the east. Clouded monitors can be differentiated by the presence of a series of enlarged scales in the supraocular region. The number of ventral scales varies, decreasing from 108 in the west to 75 in the east (Java). The species ranges from Iran to Java, among the most widely distributed of monitor lizards as they are eurytopic and adaptable to a range of habitats. It is found in river valleys in eastern Iran, Afghanistan, India, Nepal, Sri Lanka, Pakistan, Bangladesh and Burma. The closely related species, the clouded monitor, occurs in southern Burma, Vietnam, Cambodia, Thailand, Malaysia, Sumatra, Java and the Sunda Islands. They have not been confirmed on Sumatra, and have been found to be absent from the Andaman Islands. The species is mainly distributed through lower elevations below an altitude of 1500 metres, and is found both in dry semiarid desert habitats to moist forest. They are often found in agricultural areas.