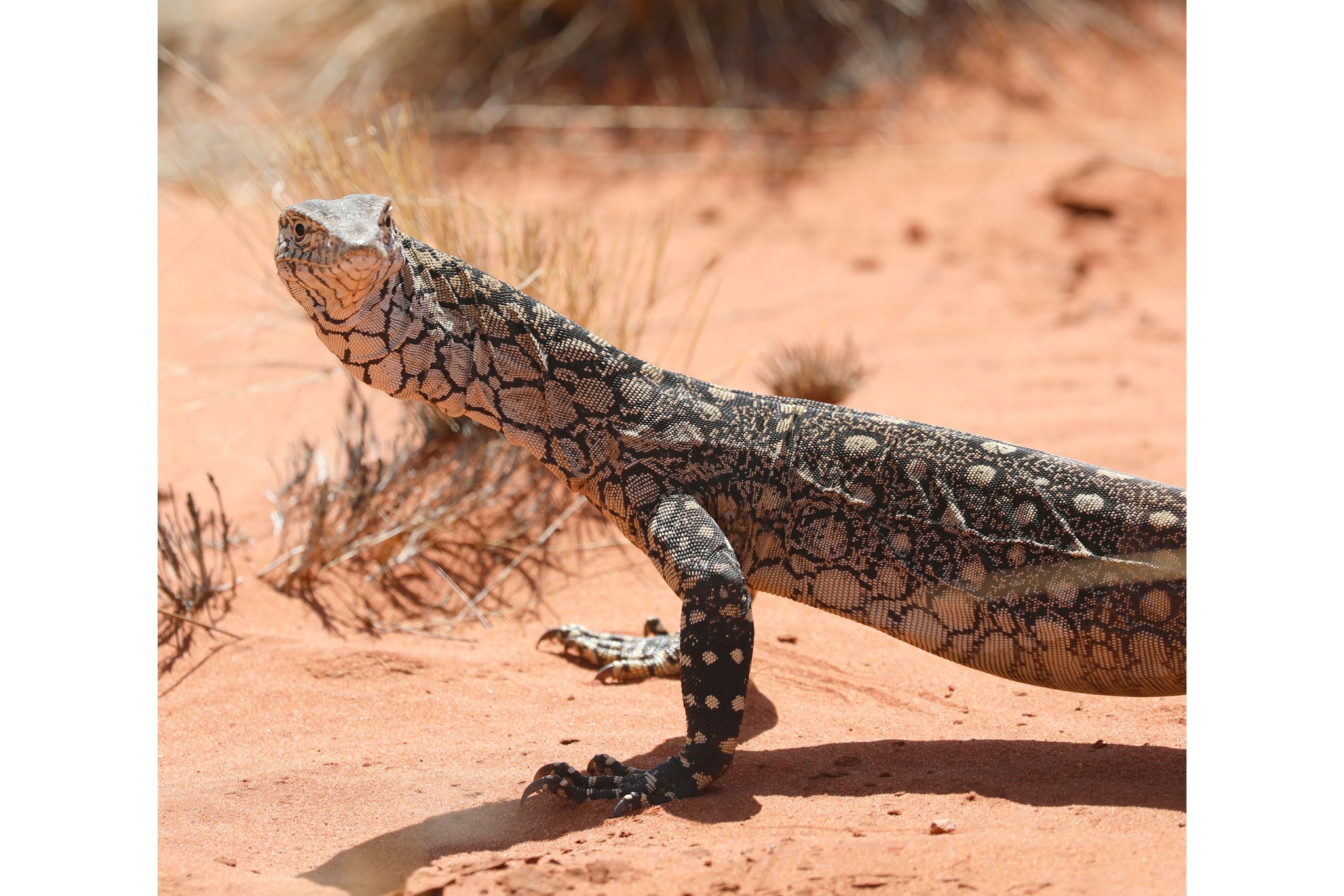 The perentie (Varanus giganteus) is the largest monitor lizard or goanna native to Australia. It is the one of the largest living lizards on earth, after the Komodo dragon, Asian water monitor, crocodile monitor, and intersecting by size with Nile monitor. Found west of the Great Dividing Range in the arid areas of Australia, it is rarely seen, because of its shyness and the remoteness of much of its range from human habitation. The species is considered to be a least-concern species according to the International Union for Conservation of Nature. Its status in many Aboriginal cultures is evident in the totemic relationships, and part of the Ngiṉṯaka dreaming, as well as bush tucker. It was a favoured food item among desert Aboriginal tribes, and the fat was used for medicinal and ceremonial purposes. The lizard can grow up to 2.5 m (8 ft 2 in) long, although the typical length is around 1.7 to 2.0 m (5 ft 7 in to 6 ft 7 in) and weigh up to 15 kg (33 lb)—maximum weight can be over 20 kg (44 lb). Its rival for the title of the third-largest lizard is the crocodile monitor, which although often longer, exceeding 2.4 m in length, is lighter and less bulky than the perentie. However, perenties are relatively lean lizards and are less bulky than either the Komodo dragon or the Asian water monitor. The Nile monitor can also compete in size, in some exceptional cases reaching more than 2,4 m in length. British zoologist John Edward Gray described the perentie in 1845 as Hydrosaurus giganteus, calling it the "gigantic water lizard". George Albert Boulenger moved it to the genus Varanus. Within the monitor genus Varanus, it lies within the subgenus Varanus. Its closest relatives belong to a lineage that gave rise to the sand goanna and the Argus monitor. In late 2005, University of Melbourne researchers discovered that all monitors may be somewhat venomous. Previously, bites inflicted by monitors were thought to be prone to infection because of bacteria in their mouths, but the researchers showed that the immediate effects are caused by mild envenomation. Bites on the hand by Komodo dragons, (V. komodensis), perenties (V. giganteus), lace monitors (V. varius), and spotted tree monitors (V. scalaris) have been observed to cause swelling within minutes, localised disruption of blood clotting, and shooting pain up to the elbow, which can often last for several hours.