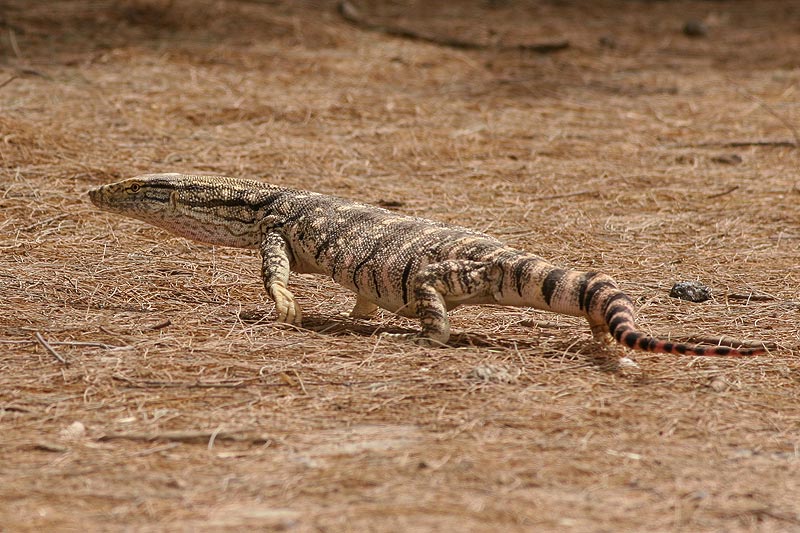 The desert monitor,Varanus griseus,is a species of monitor lizards of the order Squamata found living throughout North Africa and Central and South Asia.Three subspecies have been described V.g.griseus (grey monitor).V.g.caspius (Caspian monitor).V.g.Potrzebnyi (Indian desert monitor).The desert monitor is carnivorous,feeding on a wide range of vertebrates and invertebrates.Varanus griseus monitor lizards normally display a variety of body coloration from light brown and yellow to grey.They average about one meter in length,but can reach total body lengths of almost two meters.These lizards can also have horizontal bands on either their backs or tails,along with yellow spots across their backs.Their young are normally a brightly colored orange and have distinctive bands across their backs which may be lost as they mature.Their nostrils are slits located farther back on their snouts (closer to the eyes than the nose),and their overall body size is dependent on the available food supply,the time of year,environmental climate,and reproductive state.Males are generally larger and more robust than females,but females have a more gentle look about them.Those differences allow males to be distinguished from females from a distance without careful inspection.Adult monitor lizards also go through periods of molting in which they shed their outer layer of skin to expand their overall body size.This process can take several months and happens around three times per year.Their skin is adapted to the desert environment where they live,and they are excellent swimmers and divers and have been known to enter the water occasionally to hunt for food.The V.g.griseus subspecies (grey monitor) has five to eight narrow grey bands on its back,as well as 19-28 bands on its tail.Its tail is more rounded that those of the other subspecies,and the final size of the adult depends on which habitat they are living.Their coloration can be from simple grey (in desert-like ecosystems) to brilliantly colored (in areas with large amounts of plant growth).Their most common prey is lizards and snakes,but can also include ground-nesting birds and other small mammals.The V.g.caspius subspecies (Caspian monitor) has five to eight bands on its back,13-19 bands on its tail,a plain tail tip,and about 143 rows of scales in the middle section of its body.It has the largest body of the three subspecies,and is considered to be in danger of becoming extinct.They are found in mainly sandy or clay environments,although sporadically in sparsely woodland areas.Their diets include tortoises and their eggs,small mammals,and adult cobras and vipers.They are strong diggers and can easily build burrows that are several feet long.The V.g.koniecznyi subspecies (Indian desert monitor) has three to five bands on its back,13-19 bands on its tail,a plain tail tip,108-139 rows of scales on its midsection,and a broader and flatter head when compared to the other subspecies.It is mainly found in Pakistan and India,and has the smallest body of the three subspecies.They have been reported to possibly not go through the normal hibernation period over the winter,but are still inactive and do not feed between December and March.Their normal diets consist mainly of invertebrates,but can also branch out to other lizards and small mammals.