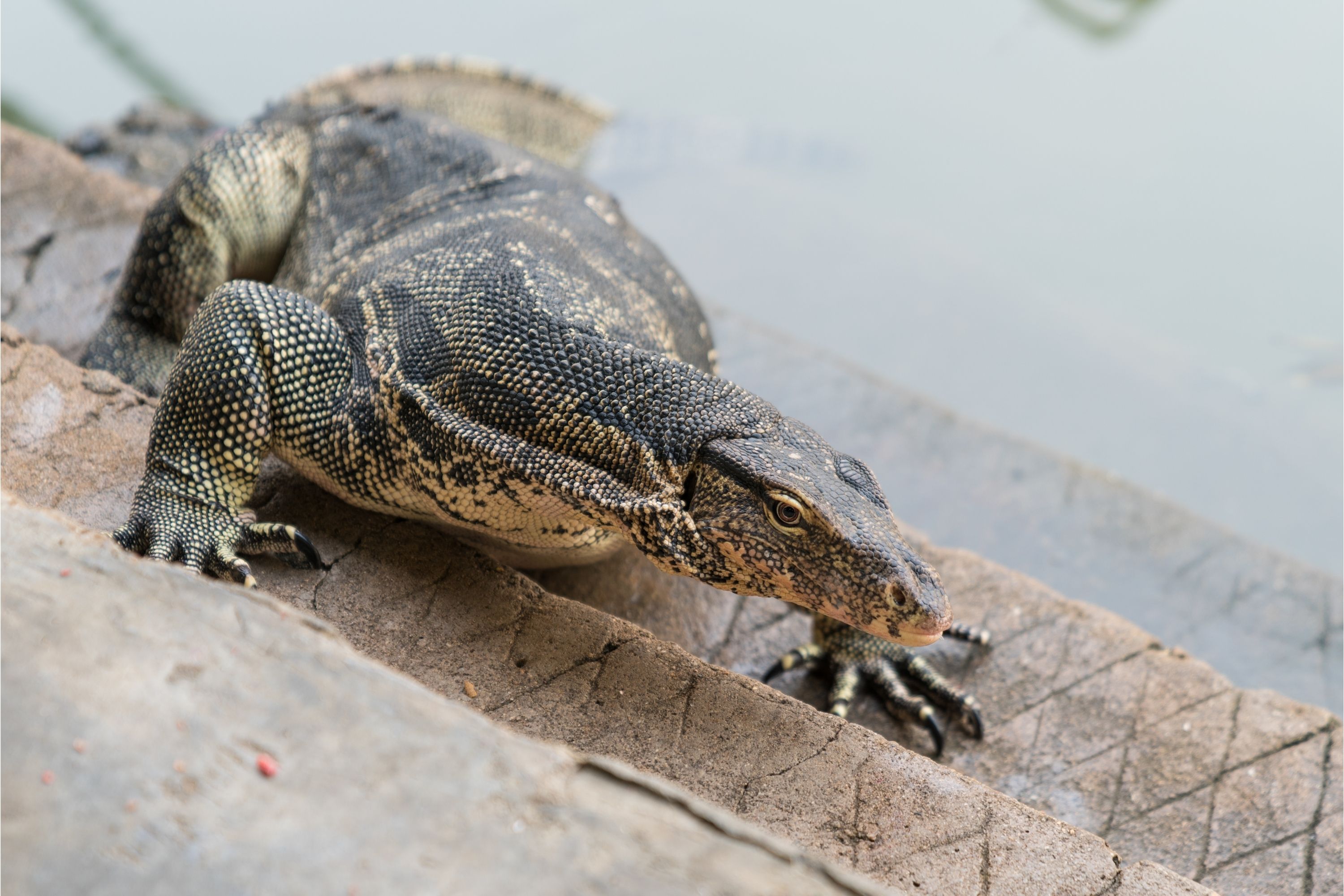 The Asian water monitor (Varanus salvator) is a large varanid lizard native to South and Southeast Asia. It is one of the most common monitor lizards in Asia, ranging from coastal northeast India, Sri Lanka, mainland Southeast Asia to Indonesian islands where it lives close to water. It is listed as Least Concern on the IUCN Red List. It was described by Laurenti in 1768 and is among the largest squamates in the world. The Asian water monitor is also called Malayan water monitor, common water monitor, two-banded monitor, rice lizard, ring lizard, plain lizard, no-mark lizard and water monitor. The water monitor is a large species of monitor lizard. Breeding maturity is attained for males when they are a relatively modest 40 cm (16 in) long and weigh 1 kg (2.2 lb), and for females at 50 cm (20 in). However, they grow much larger throughout life, with males being larger than females. Adults rarely exceed 1.5–2 m (4 ft 11 in – 6 ft 7 in) in length, but the largest specimen on record, from Sri Lanka, measured 3.21 m (10.5 ft). A common mature weight of V. salvator can be 19.5 kg (43 lb). However, 80 males killed for the leather trade in Sumatra averaged only 3.42 kg (7.5 lb) and 56.6 cm (22.3 in) snout-to-vent and 142 cm (56 in) in total length; 42 females averaged only 3.52 kg (7.8 lb) and 59 cm (23 in) snout-to-vent and 149.6 cm (58.9 in) in total length, although unskinned outsized specimens weighed 16 to 20 kg (35 to 44 lb). Another study from the same area by the same authors similarly estimated mean body mass for mature specimens at 20 kg (44 lb) while yet another study found a series of adults to weigh 7.6 kg (17 lb). The maximum weight of the species is over 50 kg (110 lb). In exceptional cases, the species has been reported to reach 75 to 90 kg (165 to 198 lb), though most such reports are unverified and may be unreliable. They are the world's second-heaviest lizard, after the Komodo dragon. The Asian water monitor is widely distributed from India, Bangladesh, Sri Lanka, Myanmar and Thailand, Cambodia, Laos, Vietnam, the Chinese Guangxi and Hainan provinces, Malaysia, Singapore to the Sunda islands Sumatra, Java, Bali, Borneo and Sulawesi. It inhabits primarily lowland freshwater and brackish wetlands. It has been recorded up to an elevation of 1,800 m (5,900 ft).