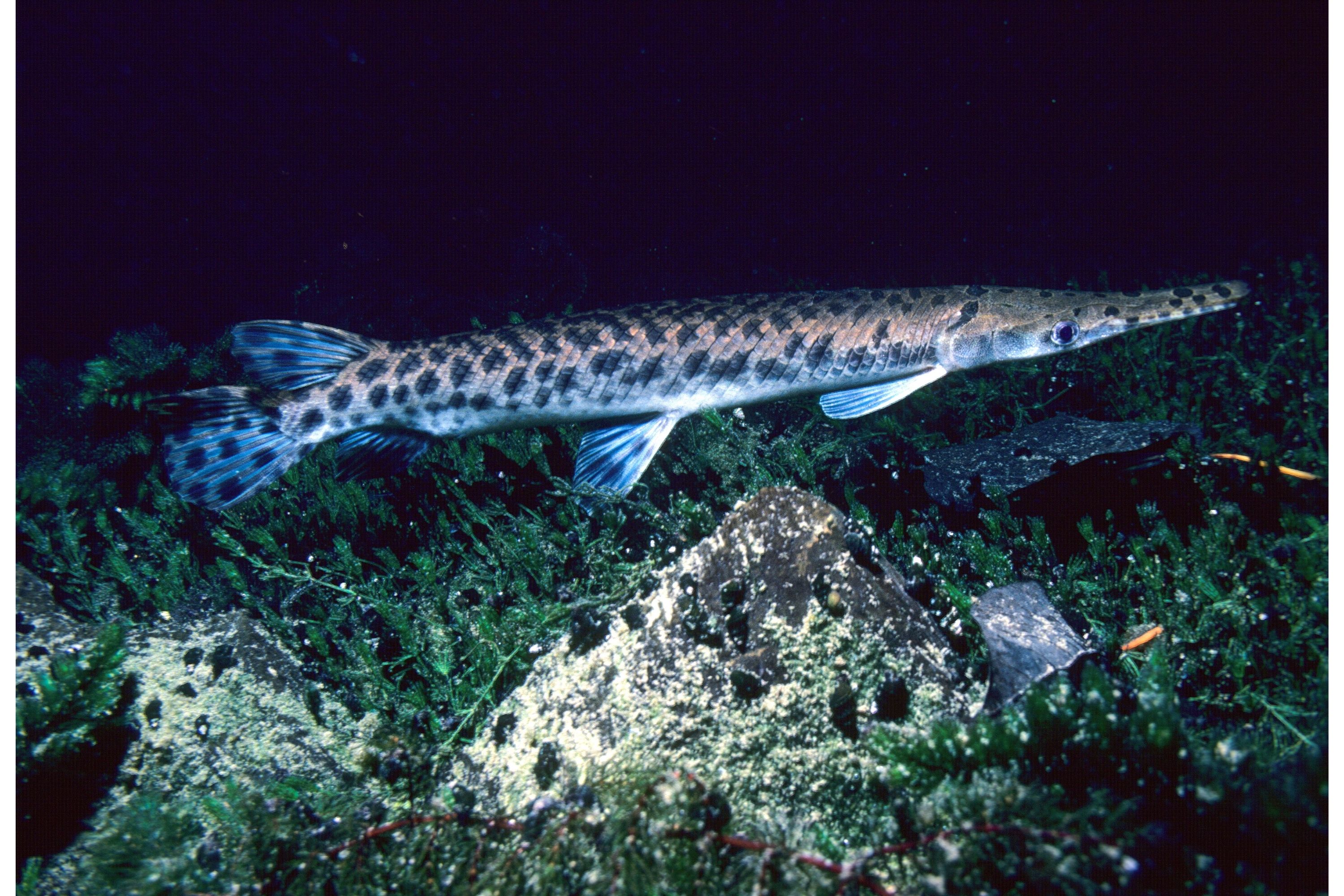 The longnose gar (Lepisosteus osseus), also known as longnose garpike or billy gar, is a ray-finned fish in the family Lepisosteidae. The genus may have been present in North America for about 100 million years. References are made to gars being a primitive group of bony fish because they have retained some primitive features, such as a spiral valve intestine, but gars are a highly evolved group of fish, and not primitive in the sense of not being fully developed. They have an olive brown to green, torpedo-shaped body armored with ganoid scales, elongated jaws that form a needle-like snout nearly three times the length of its head, and a row of numerous sharp, cone-shaped teeth on each side of the upper jaw. They typically inhabit freshwater lakes, brackish water near coastal areas, swamps, and sluggish backwaters of rivers and streams. They can breathe both air and water, which allows them to inhabit aquatic environments that are low in oxygen. Longnose gar are found along the east coasts of North and Central America, and range as far west in the US as Kansas, Texas, and southern New Mexico. They are the only species of the family Lepisosteidae found in New Mexico. Their populations are stable and in some areas abundant in the interior portions of their range. The longnose gar was first described by Carl Linnaeus (1758), who gave it the name Esox osseus. The generic name Esox, which is for pike, was later changed to Lepisosteus, the genus for slender gars. Lepisosteus osseus (Linnaeus, 1758), the scientific name for longnose gar, originated by combining lepis, which is Greek for scale, and osteos, the Latin word for bony. The latter references the bone-like, rhomboidal-shaped ganoid scales that protect gars against predation. Fossils of the genus dating from 100 million years ago (Mya) have been found in Africa, Asia, Europe, North America, and South America. In the US, fossils of the modern species date back to the Pleistocene, where they were discovered in the Kingsdown Formation in Meade County, KS and date back to the Irvingtonian (1.8 - 0.3 Mya). Longnose gar are found in Central America, Cuba, North America, and the Isla de la Juventud. Longnose gar are frequently found in fresh water in the eastern half of the United States, but some gar were found in salinities up to 31 ppt. Their microhabitats consist of areas near downed trees, stone outcrops, and vegetation.