The Field Guide to "Gymnosperms and Angiosperms" • Earth.com 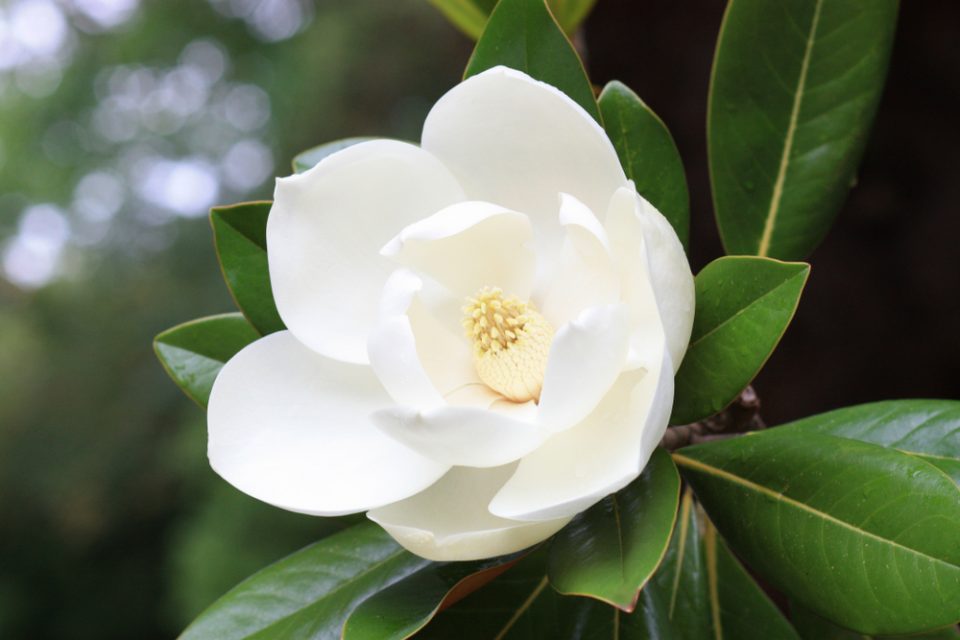 The Definitive Field Guide to Gymnosperms and Angiosperms

Gymnosperms and angiosperms are two groups of plants that constitute the seed plants, sometimes referred to as “Spermatophytes”. Seed plants form the basis of pretty much every terrestrial ecosystem on earth and comprise the world’s forests, grasslands, and all of the world’s crop production. They are easily some of the most important organisms on the planet. But how do you know if a seed plant is a gymnosperm or an angiosperm? There is one major difference that separates gymnosperms from angiosperms, but there are multiple additional characteristics one can look for to distinguish them. Some gymnosperms look remarkably similar to angiosperms and vice versa, and this article serves as a guide to differentiate these two important plant types. 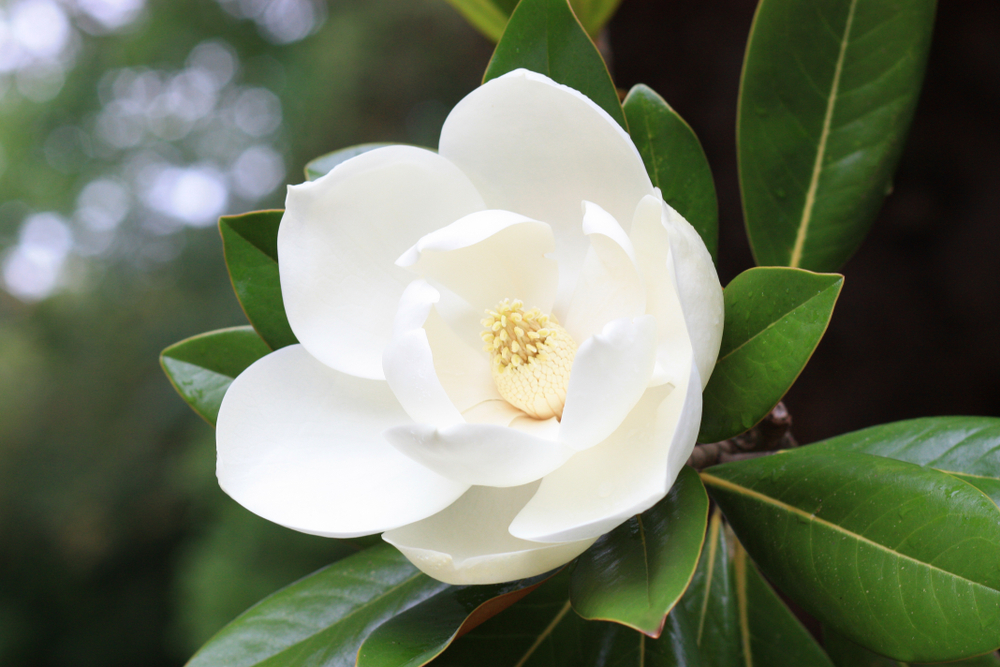 What Is a Seed Plant?

As stated before, both gymnosperms and angiosperms are seed-bearing plants. Along with ferns and their allies, seed plants are vascular plants, which means they have xylem and phloem to transport water and nutrients. They spend most of their life in the diploid, sporophyte phase and have short-lived gametophyte phases. Seed plants comprise well over 80% of the Kingdom Plantae, but that number is mainly due to the incredible diversity of angiosperms alone. In fact, there are only about 1000 species of gymnosperms, even though they are a much older lineage of plants.

The main distinguishing characteristic of a seed plant is right there in its name – the production of seeds. Compare this to plants that produce spores, such as ferns, lycophytes, and bryophytes. Seeds are very complex structures that are products of fertilization of an ovule by pollen. Even though gymnosperms and angiosperms are both seed plants, there are many differences between them. 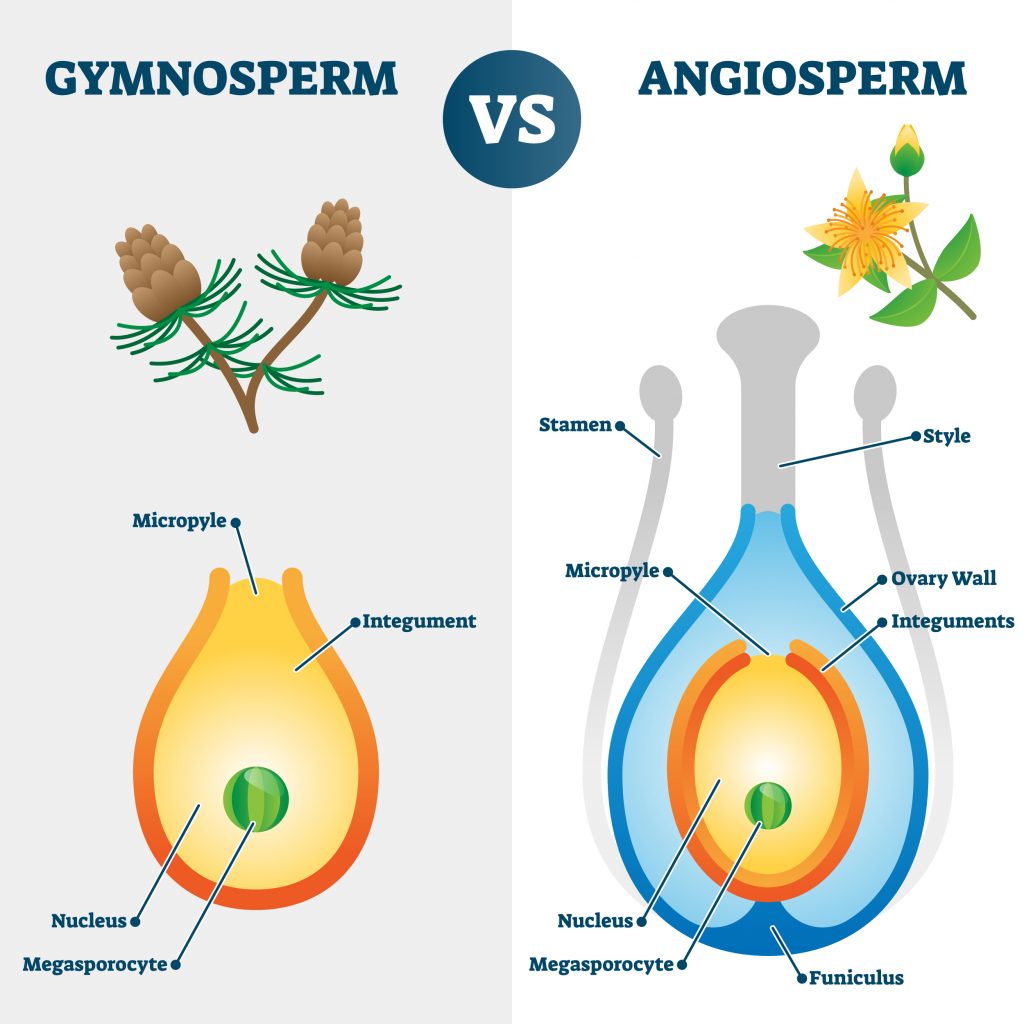 The first big difference between gymnosperms and angiosperms has to do with their life cycle and reproduction. Although both produce gametes in the form of sperm and egg cells (both haploid structures), there are key differences in their methods of pollination and fertilization.

Gymnosperms are non-flowering plants and instead reproduce through two different unisexual structures called cones. They produce pollen grains in male cones which make their way to female cones, usually by the wind. Once it makes contact with the female cone, it releases sperm that either actively moves towards the egg within an ovule (part of the female cone) or arrives via a pollen tube.

Angiosperms are commonly referred to as flowering plants because they produce flowers that help facilitate pollination. Unlike gymnosperms, angiosperms usually rely on animal pollinators to take pollen from an anther connected to a stamen to a stigma, which forms part of the carpel. Double fertilization then takes place in the female gametophyte, also called an embryo sac. 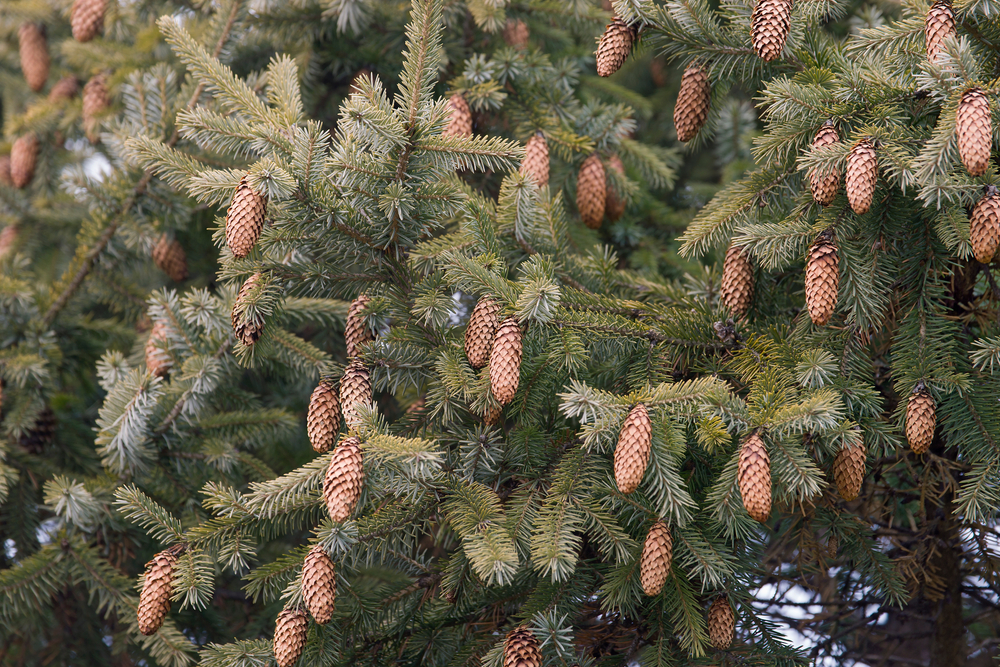 The main difference between gymnosperms and angiosperms is the structure of the seed. To start, gymnosperms have naked seeds. In fact, the name “gymnosperm” comes from the words gymnos meaning “naked” and sperma meaning “seed”. Gymnosperm seeds are formed without any protective casing in a female cone, also called a strobilus. As the seeds mature, they disperse as the cones dry out and open up.

Angiosperms produce seeds encased in an ovary which forms a fruit. The seeds of angiosperms contain an endosperm, which is usually triploid. Fruit are often edible and make up most of the world’s crops. Many animals rely on angiosperms for food in one way or another, which is part of the reason this group of plants is so diverse. 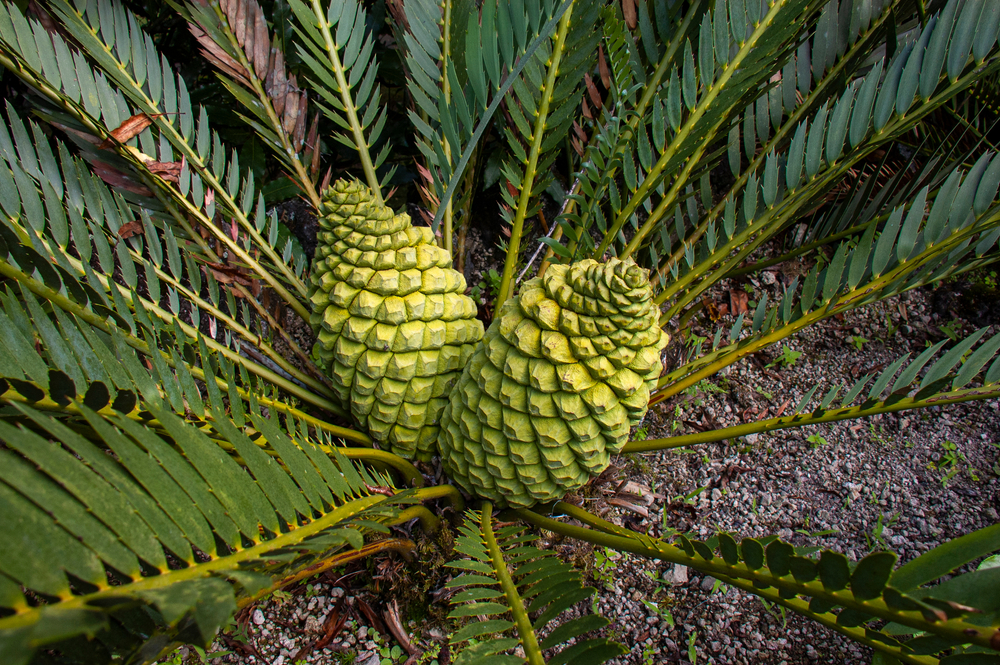 The main difference between most gymnosperms and angiosperms is leaf type. Gymnosperms usually have needle-like leaves and are almost always trees or other types of woody plants. Think of conifers like redwood trees (in the group Coniferophyta) which are some of the most well-known gymnosperms. Conifers are often referred to as “softwood” trees, while angiosperms are known as “hardwood” trees. This has to do with their wood density, which is usually lower in gymnosperms. Angiosperms usually have broad leaves, and take on a huge variety of forms including trees, herbs, aquatic plants, vines, and more.

However, these differences are pretty broad generalizations and there are always exceptions. Many species of gymnosperms look far more similar to an angiosperm. For example, cycads (In the group Cycadophyta) are gymnosperms that look very much like palms. Gnetum (Gnetophyta) is a weird and unique gymnosperm that can grow as a vine and has broad leaves that look just like an angiosperm’s leaves. Welwitschia is another unique one that grows in the Namib desert and is just plain weird with two long, broad leaves. Ginkgo (Ginkgophyta) is an ancient species of tree that represents a sort of transition between needle and broad leaves.

Some angiosperms look just like gymnosperms as well. Such examples of angiosperms include the Australian pine (Casuarina equisetifolia) and related trees. Despite its name, Australian pine is closely related to oaks, even though the foliage looks just like that of a gymnosperm. Angiosperms can be further separated into monocots and dicots, which can be distinguished by the number of cotyledons they have.