Is the Blue Macaw Extinct? Not Yet! • Earth.com • Earthpedia 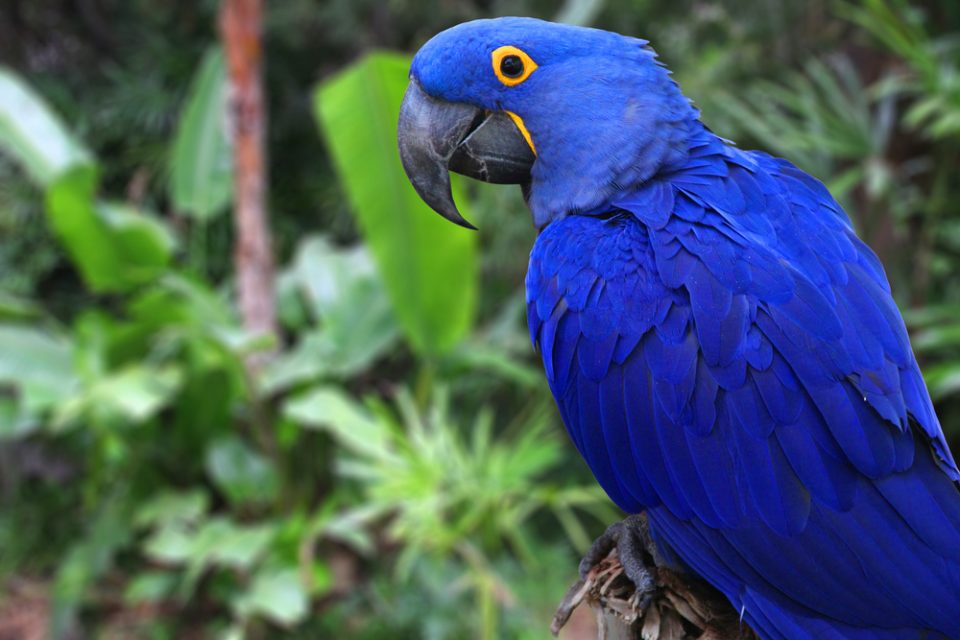 Is the Blue Macaw Extinct? Not Yet!

The blue macaw is one of the most recognizable birds in the world. Its beautiful blue feathers were known to Europeans as early as 1790, and native South American peoples for centuries before that. Unfortunately, this bird whose population may have numbered in the millions at one point is on the brink of extinction. Today, let’s take a look at what has driven these beautiful parrots to this point. 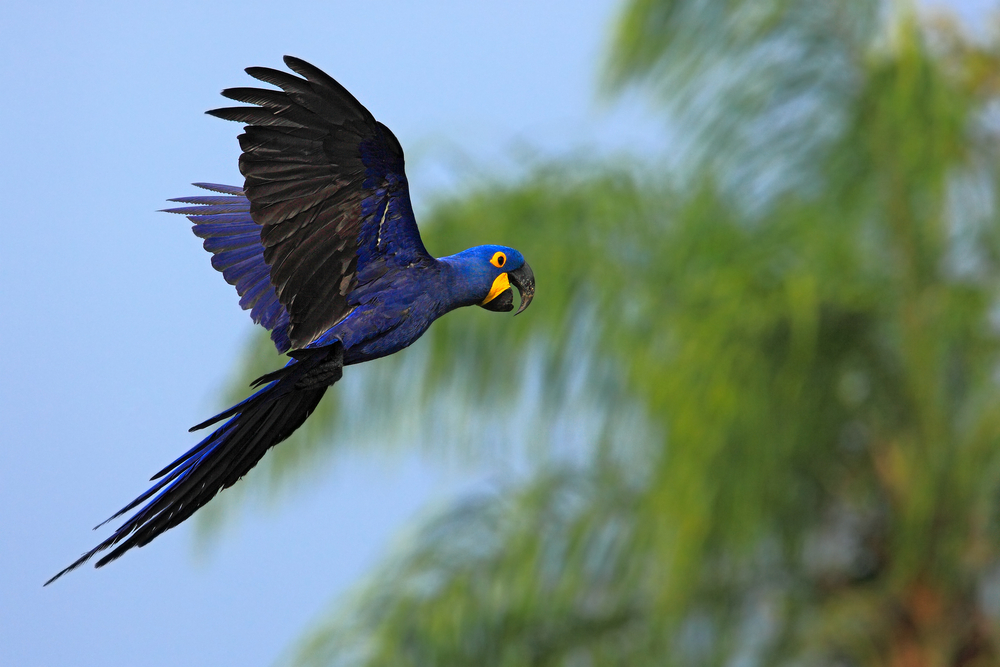 Before we can understand the unique challenges that blue macaws face, we have to first understand some basic facts about them.

To better understand the blue macaw, we have to understand its place in the world of biology. Let’s take a look at the bird’s phylogeny – its biological classification.

Blue macaws are enormous birds. In fact, they are the largest living parrots. In the wild, they can measure over a meter (3.3 feet) in length and weigh up to 2 kg (4.5 pounds). The birds are distinct due to two features. First, they all have bright blue feathers. Secondly, almost all macaws have a flashy, yellow rings around their eyes and mouth.

At one point in time, the blue macaw’s extant range may have occupied a majority of South America. Today, that is certainly not the case. The birds survive in three relatively distinct population clusters.

The blue macaw has similar habitat preferences to other parrots. They generally stray away from dense forest, preferring to occupy semi-wooded or less-densely forested areas. These often include palm swamps. When the macaws do live near dense jungles, they often live along the wide-open banks of major rivers.

Unlike some taxa, birds differ widely in their diet. Large birds of prey – hawks, falcons, etc – are carnivores. Smaller songbirds – robins, jays, etc – are insectivores. The same thing is true for parrots. The New Zealand superfamily of parrots is omnivorous – feeding on both nuts and the hatchlings of seafaring birds.

The blue macaw has a much simpler diet. It is almost exclusively a herbivore that feeds on nuts. In some areas of its habitat, the birds will feed on nuts from only a few types of trees:  A. aculeata and A. phalerata. Macaws will also consume some fruits or vegetables depending on what their local environment has to offer.

The gestation period for the eggs is roughly one month. The fledglings will eventually leave the nest after around 100 days. Like many large birds, the clutch size is small, usually around two. The birds have to survive for quite some time in the wild because they do not reach sexual maturity until the age of seven. 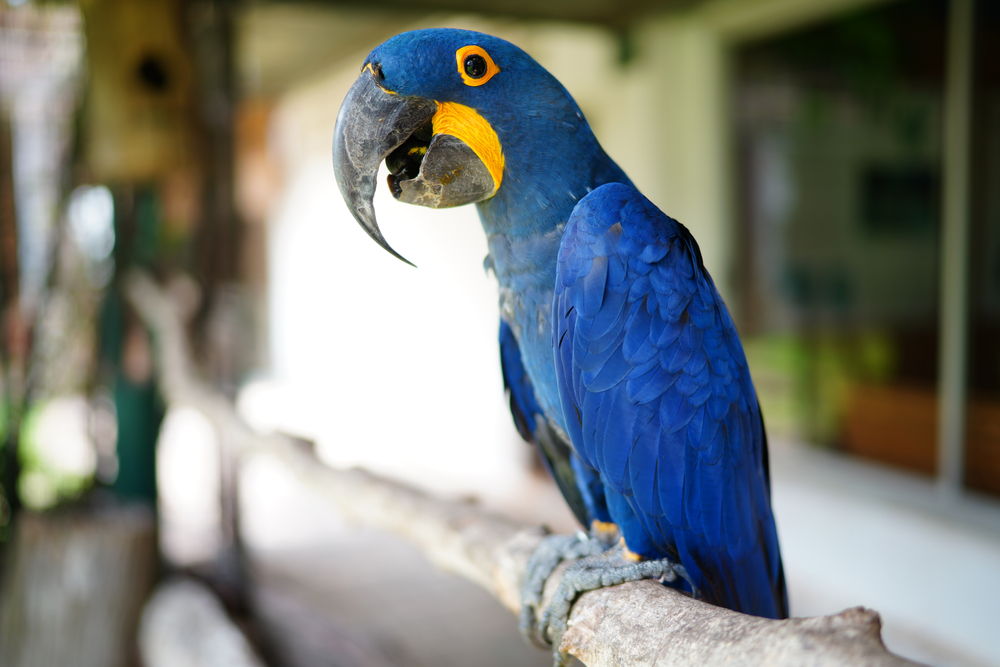 Blue macaws have been endangered for decades. The other two species in the genus Anodorhynchus provide both a glimmer of hope and a worst-case scenario. The Lear’s macaw has seen a tremendous comeback in the last ~20 years, multiplying its population over ten-fold. On the other hand, the Glaucous macaw is thought to be extinct. Let’s take a look at the two-fold extinction threat to blue macaws. 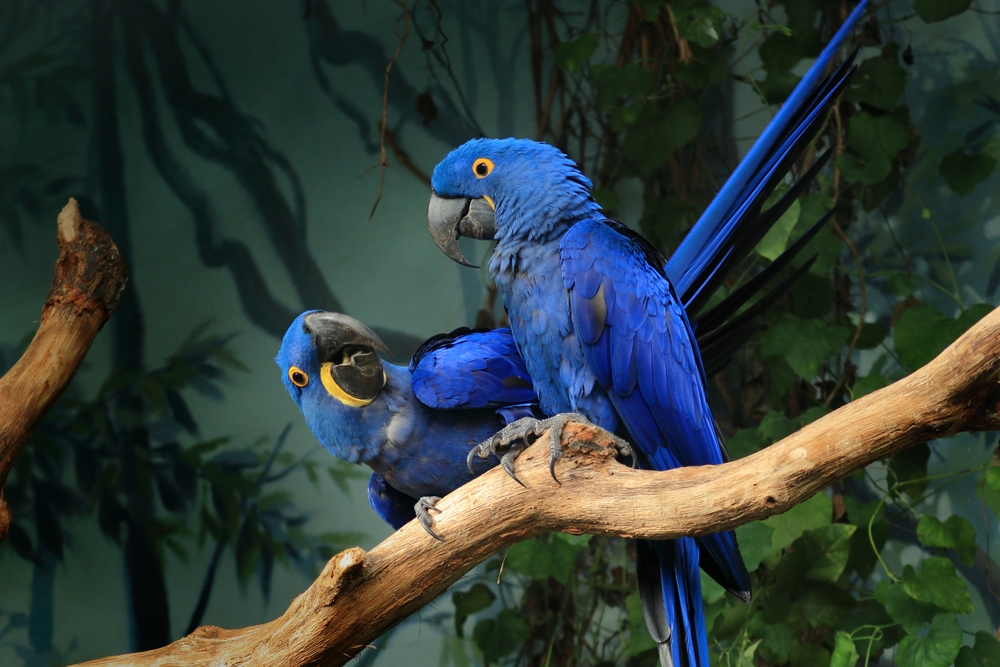 According to the International Union for Conservation of Nature’s Red List (IUCN), the blue macaw is listed as “vulnerable – decreasing.” They indicate that roughly 4,300 are left in the wild, and that number is decreasing. While this news is discouraging, there are two bright spots.

First, the number of birds in safe captivity is increasing. More zoos and sanctuaries are recognizing the importance of keeping active birds for genetic diversity. This means that the possibility of reintroducing macaws back into the wild increases with time.

Secondly, multiple Brazilian national and other international organizations are actively monitoring the macaw population. Knowing the challenges is the first step in helping macaws make a recovery to a healthy and stable population size.