What is Ocean Acidification? • Earth.com 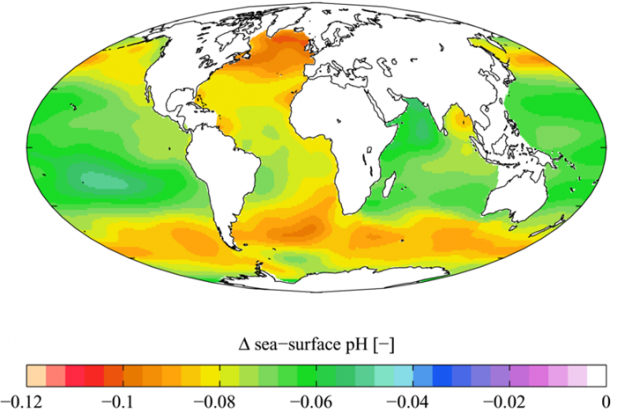 What is Ocean Acidification?

Ocean acidification is the name that was given to the ongoing decrease in the pH of Earth’s oceans, a cause of the uptake of anthropogenic carbon dioxide from the atmosphere. About 30 to 40 percent of the carbon dioxide that is released by humans into the atmosphere dissolves into the lakes, oceans, and rivers. To maintain the chemical equilibrium, some of it reacts with the water to create carbonic acid. Some of these extra carbonic acid molecules react with a water molecule to provide a bicarbonate ion and a hydronium ion, therefore, increasing the oceans acidity.

This increasing acidity is considered to have a range of direct undesirable consequences such as depressing metabolic rates in jumbo squid and depressing immune responses of blue mussels.

Other chemical reactions are triggered as well which result in an actual net decrease in the amount on carbonate ions available. Within the oceans, this makes it harder for marine calcifying organisms such as plankton and coral to form biogenic calcium carbonate, and such existing structures become vulnerable to dissolution. Therefore, ongoing acidification of the oceans also stands as a threat to the food chains connected with the oceans.