Okay… How Do Cats Purr? • Earth.com 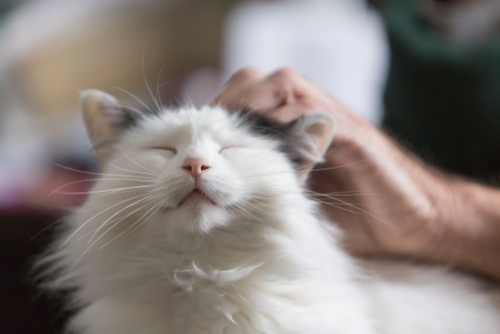 Okay… How Do Cats Purr?

A cat’s purr comes from the vibrations of the vocal cords, resonating against the bones of the voice box. Most cat vocalizations (all the meows, mews, and hisses) happen in the same way humans talk. However, a purr is more of a curiosity. Learn how cats purr and some more interesting facts about their vocalizations here!

How The Voicebox Works

To understand how cats purr, we need to start with an anatomy lesson. In general cats make noise similarly to humans – using the larynx or voice box. A combination of cartilage, muscle, and bone, the larynx sits in our respiratory tract at the back of our throat and above the trachea. The bones from the lower jaw, in conjunction with the cartilage from the thyroid and epiglottis, create a chamber for the sound to reverberate. The center of the epiglottis is called the glottis. Perpendicular muscles line the glottis region and control the expansion and contraction of the airway. One function of the epiglottis is to ensure food goes into the stomach and air goes into the lungs! On an inhale, these muscles open to create a wide opening for plenty of oxygen to pass through to the trachea.

A cat meows in the same way a human sings! To produce sound, two of the laryngeal muscles will actually touch together and vibrate, also known as the vocal cords.  These vibrations happen when air forces its way through on the exhale. Simultaneously, another muscle group controlling the size of the opening creates varying pitches. Your cat’s determined meow literally looks different in their throat than their demure mew.

How Do Cats Purr?

Purring, on the other hand, doesn’t happen in quite the same way.  While meows and yowls can only happen while the cat breathes out, the purring sound can come from both the inhale and exhale. The purr starts from the vibrating muscles of the vocal cords as air pushes in and out with the cat’s breath. But the true sound comes from the bones!

All cats have something called a hyoid bone (humans have one too!). The bone sits in the back of your throat and supports the tongue and larynx. When the vibrations from the cat’s vocal cords hit the hyoid bone, it begins to rumble. That low-frequency reverberation is purring!

While you’ve probably grown to expect purring from your house cats, not all cats purr! While all kitties, big and small, belong to the family Felidae, two subfamilies delineate a difference between two distinct groups: the purring cats and the roaring cats. Interestingly, these groups are separated by the noises they can make!

Domestic cats are obviously among the purring group, but others in the subfamily Felinae may surprise you. Many wild cats purr including cheetahs, servals, bobcats, and pumas (aka mountain lions or cougars). While purring cats are generally smaller, they don’t have to be. Pumas, for example, can weigh over 200 pounds!

On the other hand, members of the subfamily Pantherinae can’t purr, regardless of how happy they feel or what snuggles they get.  This group includes all the classic big cats like jaguars, leopards, lions, and tigers. But while they can’t purr, they have another sonic superpower… roaring!

Why Do Cats Purr?

This question has remained a bit of a mystery, but there are a few dominant theories. While the generally accepted idea is that cats purr to show contentment, that is not always the case. Many kitties also purr right before being fed or on the way to the vet. We won’t entirely discount the affection a cat owner may feel while snuggling with your furry friend, but it’s safe to say that cats sometimes also purr when they are hungry and when they are nervous.

From an evolutionary perspective, there’s a whole different theory. Based on research from Elizabeth von Muggenthaler, a bio-acoustician who studies animal sounds, it seems likely that purring is a form of self-healing. The frequency of cat purring lies between 25 and 150 Hertz. Those are the very frequencies that have also been shown to stimulate bone growth and reduce pain. As they purr, they are essentially doing a health and wellness practice! Since cats spend much of their time being sedentary, incorporating purring into their daily routine keeps them fit and healthy while conserving energy.

Whether cats purr as a form of communication or as a deeply ingrained way to stay fit, it’s safe to generalize that they do it for comfort. But that comforting sound doesn’t have to be all for them. Studies indicate that cat owners benefit from purring as well. Not only is it simply destressing to pet a purring kitty, being around a purr-box correlates with lower blood pressure and a decreased risk of heart disease in their human counterparts. Maybe that means you should add adopting a kitty to your list of health goals for the year!