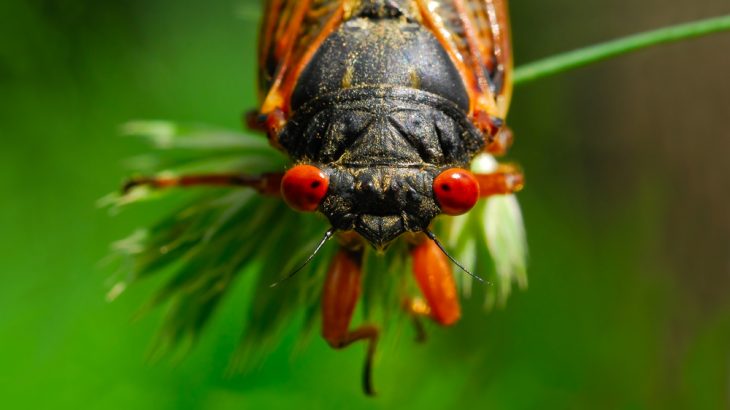 The Cicadas Are Coming: Brood X

They have beady red eyes, they make an ominous buzzing sound, and they will emerge in the billions! That might sound like the start to a horror movie, but let’s instead have it be an introduction to the sweet insect celebrity of 2021…the cicada! Though the sentiment “the cicadas are coming” might sound like a warning and the name “Brood X” like something from a dystopian novel, we meet this phenologic event with more of mystic awe than a nervous foreboding. In short, Brood X includes the geographically largest group of periodic cicadas that have been living underground since 2004 and are expected to emerge during the spring of 2021. Here, we’ll share a bit about cicada ecology and answer some common questions about Brood X, so you can be just as excited for them as we are! 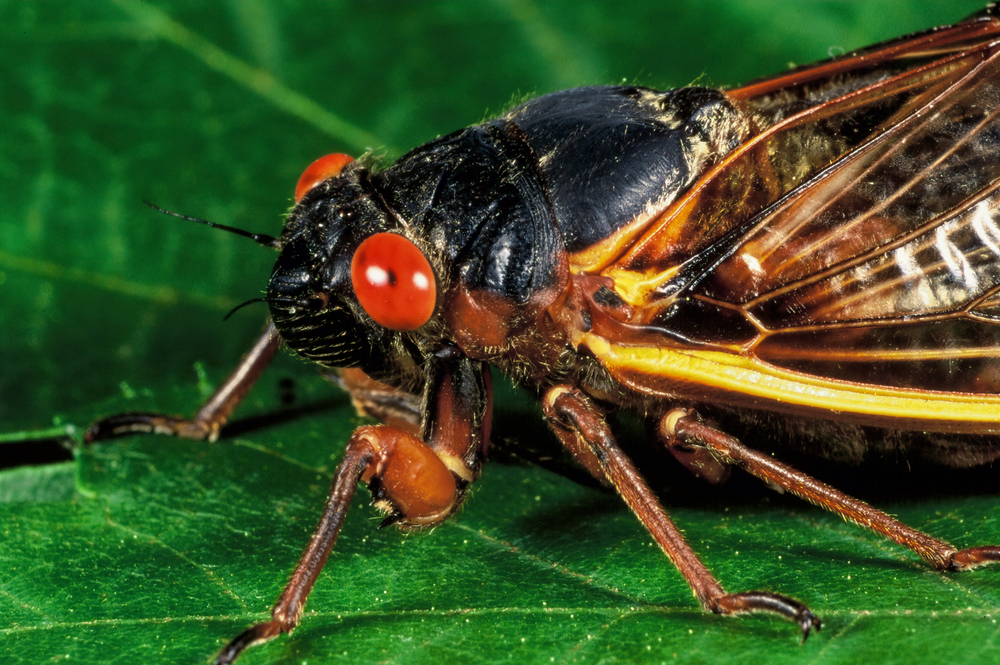 There are over 3,000 species of cicadas, mostly comprised by the family Cicadidae (with two outlier species are in the family Tettigarctidae). All cicadas, however, are members of the Hemiptera order and are generally known as “true bugs” because of the rostrum mouthparts that allow them to suck sap from plants. Cicadas can be grouped as either annual or periodical. Annual cicadas reproduce and emerge every one to three years, and include the vast majority of Cicadidae members. Periodic cicadas display an amazing behavior of breeding in much longer cycles – after hatching from the eggs the baby cicadas will spend 13 or 17 years underground before emerging as adults.

While cicadas are found worldwide, the phenomenon of periodic cicadas only exists within seven species in the genus Magicicada all found in the eastern United States. With a large (1.5-2 inches) black body, orange veined wings, and red eyes, these cicadas also look distinct from their other relatives. So while this summer’s community of cicadas will include both annual and periodical species, you’ll be able to tell Brood X apart just by their appearance.

What Is a Cicada Brood?

With some species emerging every 13 years and some every 17, entomologists needed a way to track the individuals’ life cycles that emerge in a given year. Each of these groups is called a brood and given a unique roman numeral (e.g. Brood I, Brood IV, Brood X). Remember though that there are seven species of cicadas that display this behavior. So these broods of periodical cicadas often include more than one species of cicada. Likewise, each species of cicada can be found in many distinct broods. For example, Brood X includes the species Magicicada septendecim, Magicicada cassini, and Magicicada septendecula.

When one brood emerges, their offspring return for the same cycle of either 13 or 17 years. Brood X cicadas have been laying in wait underground since 2004. That puts our last 13 months quarantining during the pandemic to shame!

Why Do Cicadas Go Underground for so Long?

This question poses quite a mystery! With insects normally have such rapid turnover in their lifecycles, it seems quite strange that these few species would evolve to play such a waiting game. To answer it, we just have to consider the evolutionary pressures on an insect similar to this. They aren’t poisonous (in fact, they’re quite nutritious), and they exist in large numbers. The perfect food source!

Their underground trickery seems to be a way to give the slip to their more voracious predators. Without year-to-year consistency, animals that enjoy cicada snacks can’t rely on the periodic insects for prey. And when they do emerge, they do so at such a grandiose scale, that their predators can’t keep up. This is commonly called the predator-satiation hypothesis.

Periodic cicadas have the longest life cycle of any known insect. But though it differs in duration, it’s not a unique process. These bugs go through incomplete metamorphosis with the life stages of egg, nymph, and adult. To give you a better picture of a cicada’s life, let’s take a look at the parents of Brood X, and go back in time to the last time Brood X was around in 2004.

Seventeen years ago, newly emerged cicada adults from Brood X focused on their paramount task for this life stage: breeding. The males struck up their evening chorus to attract a silent female. After mating, the female will carefully split the bark of tender twigs and lay hundreds of eggs, in batches of 24-48.

One to two months later the eggs hatch and rice-like nymphs drop to the ground. Though tiny, they have strong forelegs that they use to bury themselves between one to eight feet in the soil. Just like nymphs of other insect species, this life stage is important for feeding and growing. But periodic cicadas just spend a bit longer as nymphs than the usual six-legged friend. Safely underground, that feed on plant and tree roots for the next 17 years.

Now let’s return to 2021. After years of snacking and growing, the last instar of the cicada nymph digs its way out of the soil where it molts one final time to reveal the fully winged adult! Brood X emerges en masse to breed again! 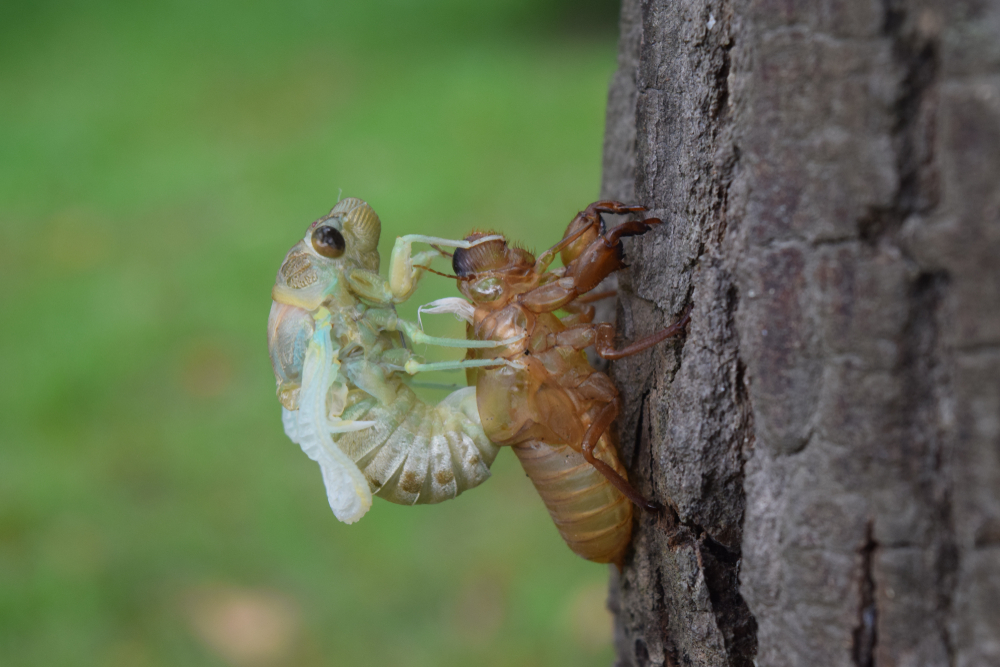 This might feel similar to a graduation announcement, and, in a way, it’s exactly that. The Brood X cicadas (also called the Great Eastern Brood) have been growing up for the past 17 years and have finally reached adulthood! And now they can throw their caps (aka shed their exoskeletons) and have the rager of their lives (aka their cacophony of noise the males make). We’re excited to celebrate them, and, to help spread the cheer, we’ve answered some of the most common questions about cicada entomology below.

When Will The Brood X Cicadas Come & How Long Will They Stay?

The Brood X cicadas will use soil temperature as a cue to help them know when to dig their way to the surface. When the soil reaches about 64 degrees Fahrenheit, the nymphs will begin to crawl towards the sun. But this level of thermo-tracking is not new to them. They have actually been using freeze and thaw cycles to track each of the past 17 years. Without calendars and push notifications, they need some way to count the days! For their range across the eastern U.S., you can expect them between April and June, depending on latitude.

With the singular goal of reproduction in mind, adult cicadas only live for two to four weeks, just enough for the female to lay eggs. So just as quickly as the cicadas appeared, they will vanish.

Where Will The Brood X Cicadas Be?

What’s All the Racket?

Even if you haven’t seen a cicada before, you’ve probably heard their mating calls. The drone of the male cicada can get close to 100 decibels – similar to a motorcycle! So there’s no shame if you feel the need to cover your ears. In contrast to other noisy insects that use wings or legs to create sound, cicadas have specific organs totally dedicated to their serenade. Called tymbals, these structures are rib-like features that the cicada buckles together to create vibrations.

When anything comes out in the billions, it’s natural to feel wary. But there’s nothing about cicadas to be worried about! You might start noticing a few more around, but apart from the ear-splitting evening song they pose no threat to humans. They won’t bite or sting and aren’t poisonous. In fact, full of protein and low in fat, cicadas could make a delicious and nutritious treat!

Though many often confuse cicadas with locusts because of their sheer numbers, they don’t pose nearly as severe a threat to crops. Since they rely on the sap from woody plants, they won’t even touch your herbaceous tomatoes and strawberries. If you have an orchard, you might take a little more caution. Especially if you have younger saplings, consider tossing some netting over them more the couple weeks the cicadas are out in force.

Another common concern surrounds pets. Oftentimes, dogs might find a fun game of chasing and catching cicadas, while some more adventurous canines even decide that a cicada is the dog biscuit of the century and chomp them up. The short answer is this is all fine. Cicadas are edible to dogs, just as they are to humans. Though they might get a tummy ache if they eat too many. So try to keep your pup from overindulging, and you should be ok! 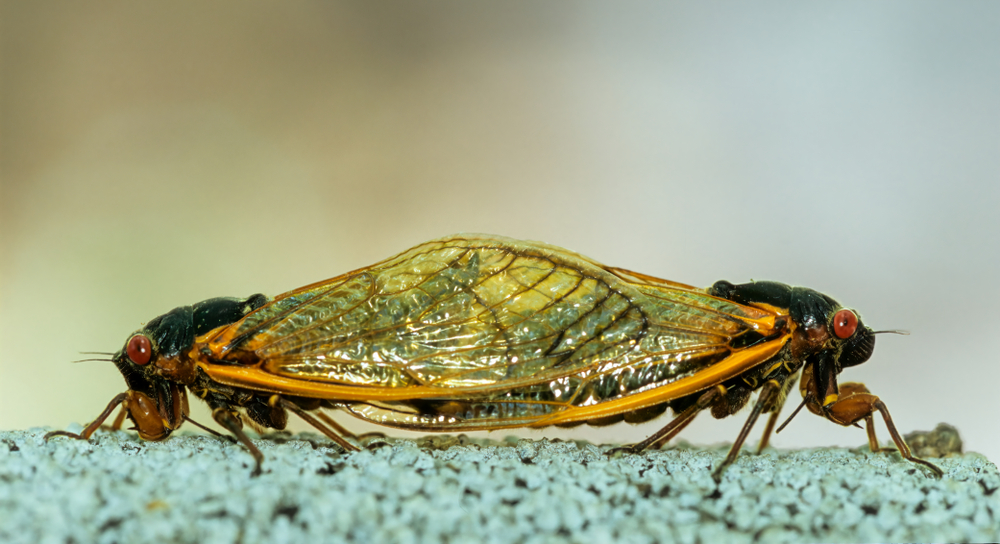 With that, we wish Brood X an amazing year of cicada mania! We hope that their breeding season succeeds, that their songs echo through neighborhoods everywhere, and that their cicada babies hunker down for another nourishing and relaxing 17 years underground. ‘Til 2038, Brood X!