What the Heck is Hallucigenia? • Earth.com 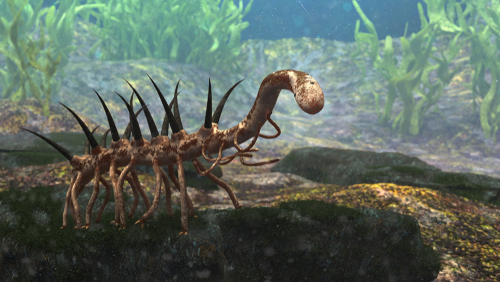 What the Heck is Hallucigenia?

Hallucigenia existed during the middle of the Cambrian era, about 500 million years ago. This era was just after the ‘Cambrian explosion’ when the diversity of life on Earth radiated from simple, multi-cellular organisms to complex animals that were the ancestors of animals that live on Earth today.

500 million years ago most life was in the oceans instead of on land. The supercontinent Gondwana was forming, which created a massive mountain range. The nutrients that flowed down to the ocean from the erosion of that mountain range is thought to have provided the building blocks necessary for the Cambrian explosion.

The big dinosaurs and insects didn’t evolve until much later. During the middle Cambrian era, most animals were still fairly small.

Charles Doolittle Walcott discovered the first fossils of a strange, worm-like creature in the burgess shale of Canada in 1911. Mr. Walcott was a distinguished paleontologist who later rose to be the head of the Smithsonian from 1907-1927. Walcott described this other-worldly creature as an annelid. He gave the fossils the genus name of Canadia, based on where he found the fossils.

Annelids are a group of animals that includes segmented worms, such as earthworms and leeches.

The Trippy Re-Discovery of Hallucigenia

Although he was a world-class paleontologist, Walcott was wrong about his Canadia fossils being annelids.

Simon Conway-Morris, an English paleontologist, decided to look into Canadia. After researching the fossils for some time, he re-named the mundane Canadia genus to Hallucigenia in 1977. He thought these creatures had a “bizarre, dream-like quality” and named them accordingly. Conway-Morris decided that the creature was closer to a caterpillar than a worm because of all the unusual appendages shown in the fossils. He also thought that Hallucigenia walked on pointy, stilted legs and that it used the appendages on its back as food-scavenging tentacles.

In a fun fact in scientific history, Conway-Morris won the Charles Doolittle Walcott Medal in 1987. This medal is only given out every five years.

An Upside-down Flip of Hallucigenia

Half a century after Walcott’s discovery, Lars Ramsköld and Hou Xianguang conducted the first about-face in this creature’s story. Ramsköld and Hou took a close look at some Hallucigenia fossils from China. These fossils flipped (literally) a new page in our understanding of the genus.

Researchers Ramsköld and Hou realized prior researchers had imagined the Hallucigenia upside-down since its discovery. In 1991, Ramsköld and Hou suggested that the long spikes of Hallucigenia were actually protective spikes on the creature’s back, not stilted legs. The food-foraging appendages were actually the dexterous legs that these worm-like creatures used to move around. A key hint in the Chinese fossils that supported Ramsköld and Hou’s reorientation lied in the legs. The new legs had little claw-like structures on the end of them. These claw-like structures gave strong evidence to support those appendages being legs.

Ramsköld and Hou also thought that Hallucigenia was more closely related to velvet worms (Onychophora) than to caterpillars, as Conway-Morris had thought. More specifically, Hallucigenia are currently described as lobopodians (‘blunt-feet’ in Latin). Some taxonomists consider tardigrades (sometimes called water bears) in this same group. Lobopodians are a type of arthropod, which are segmented insects with appendages and an exoskeleton Arthropods are part of the superphylum of ecdysozoans, which includes nematodes, and some marine worms.

Today, velvet worms live in the tropics and the southern hemisphere, where they appear as something between a velvety caterpillar and a worm. Further research of Hallucigenia will help scientists construct a more accurate common ancestor of velvet worms.

What About that Dark Blob?

Shortly after his upside-down dicscovery with Hou, Ramsköld questioned whether the head of Hallucigenia was actually its real head. All the Hallucigenia fossils had a dark blob on one end of the body. While prior researchers had assumed this was a blob-like head, Ramsköld wasn’t so sure.

He thought the blob might be a result of the creature’s death. Perhaps all of the guts squirted out of the worm as it died, creating a small puddle behind the creature in the fossil. While Ramsköld had no evidence, he had a hunch that the blob might actually be at the tail end of this insane critter.

It took scientists over 20 years to confirm what Ramsköld expected. Martin R. Smith from the University of Cambridge and Jean-Bernard Caron from the Royal Ontario Museum in Toronto used an electron microscope to analyze Hallucigenia fossils in great detail and resolution. Martin Smith and Jean Caron made a startling discovery while looking at what was previously thought to be the tail. They saw two simple eyes and even a goofy smile on the mouth of the fossil. The mouth even had a ring of needle-like teeth in its throat. This evidence confirmed Ramsköld suspicion that Hallucigenia’s head was actually not the blob but the other side of the body. This face-to-tail transition was the most modern change in our understanding of Hallucigenia.

We currently understand there to be three species of in the Hallucigenia fossil record; Hallucigenia sparsa, H. fortis, and H. Hongmeia.

What Hallucigenia Teaches Us About the Scientific Process

While Hallucigenia is an interesting animal, its wild ride of being turned upside-down and front to back teaches a lot about the scientific process. Science is our best guess as to what is happening in the natural world. Time and again, these guesses are proven to be off point or just plain wrong. The scientific disciplines build off of prior research to try to get ever closer to the truth. New technologies, such as the electron microscope in this case, often help to reimagine a previously accepted scientific hypothesis. Oftentimes, these changes meet great resistance from the prior generation of researchers who don’t want their work refined or overturned.

It is likely that researchers will make yet another groundbreaking discovery of Hallucigenia. Don’t be surprised when they do! Paleontology techniques will improve. Technology will become more sophisticated. And researchers might twirl Hallucigenia around in another direction making it even more bizarre.