Where Do Pufferfish Live? • Earth.com • Earthpedia 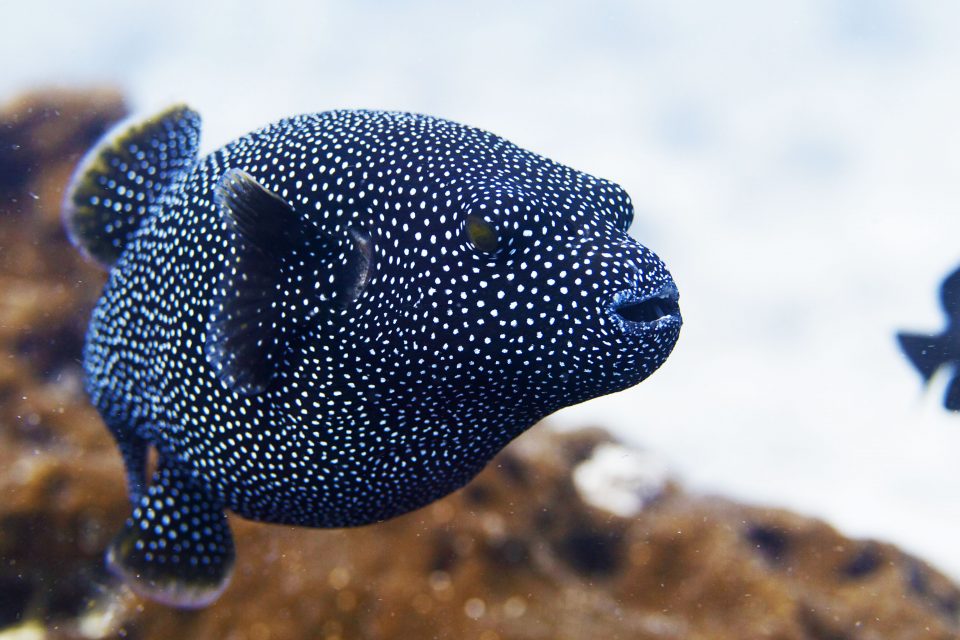 Where Do Pufferfish Live?

Pufferfish are one of the most recognizable fish around the globe. I first learned of pufferfish through the popular kid’s show, Spongebob. One of the characters is Mrs. Puff, who is a sassy driving instructor. Spongebob is an awful driver and every time he crashes, Mrs. Puff puffs up into that classic, silly-looking pufferfish.

Since you’ve landed on this webpage, perhaps you’ve heard some of the crazy facts about puffers. Obviously, pufferfish puff up to a surprising size when frightened. They do this by sucking tons of water (or air if out of water) into their elastic stomachs. This behavior is to intimidate predators. Since puffers aren’t particularly fast fish, they rely on scaring predators rather than swimming away.

In particular, they rely on the incredible potency of the toxin they produce. Puffers kill people around the world every year with their deadly tetrodotoxin. Or perhaps it is more accurate to say that the puffers had no intention of killing a human. Since humans insist on eating these dangerous fish, they invite a deadly risk into their diet.

This fish toxin is amongst the most toxic things known to humankind. It is 1,200 times more deadly than cyanide. Apparently, the amount of tetrodotoxin in a single puffer is enough to kill 30 fully grown humans. Yikes! 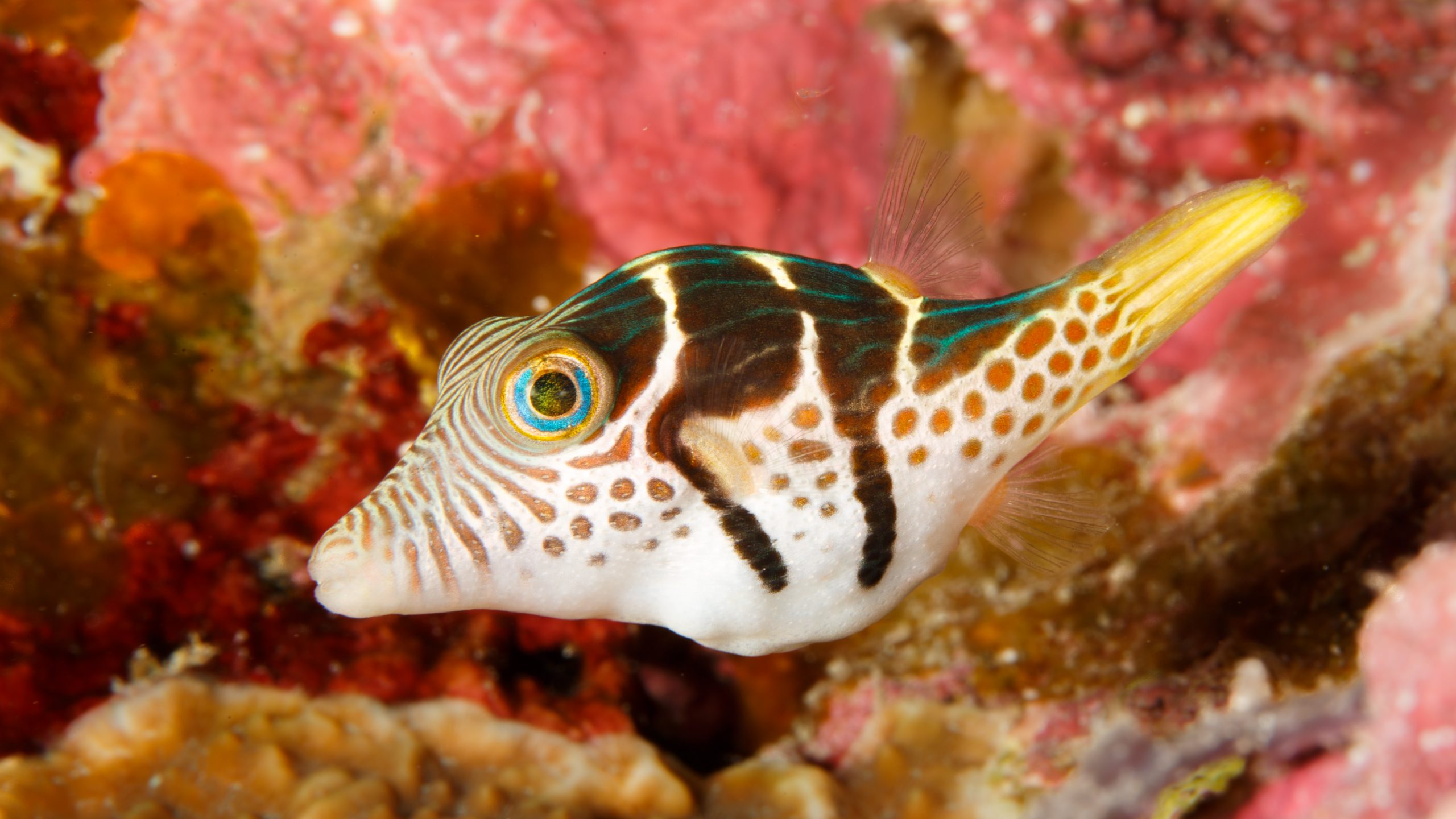 A beautiful saddled pufferfish. Who would expect such a pretty fish to be full of such potent toxins!

Like humans, dolphins aren’t completely deterred by the puffer’s toxins. In fact, it appears that they suckle on these fish to get high off of the toxin. After all, medicines and drugs are just poisons at a lower dosage. How did the dolphins first discover that merely sucking on the fish would produce a psychoactive effect when eating the same fish would kill them?

Alright, last fun fact about pufferfish. Some species make stunning, geometric patterns in the sand as nests! These attractive nests are made by males to lure in potential mates. Pufferfish obviously have a good aesthetic taste.

What Is a Pufferfish?

‘Pufferfish’ are a family of fish that is part of the order Tetraodontiformes. This order includes fish that look similar to the puffers, such as porcupine fish and boxfish. It also includes some different looking types, such as sunfish and triggerfish. A difference between pufferfish and porcupine fish is that puffers’ spines are only visible when they are puffed up, while porcupines fishes spines are always visible.

Tetraodontidae, the puffer family, means ‘four teeth.’ This refers to the four teeth on the top and the bottom of the puffers’ mouths that fuse into plates. These plates are sturdy and strong. The puffers use them to crunch hard marine shells of muscles, clams, and even crabs. Pufferfish can live on a vegetarian diet of algae but prefer meaty crustaceans when available.

There are about 200 species of pufferfish around the world in 39 different genera. This is a relatively diverse family of fish. The smallest puffer is only an inch long, while the largest is about 3 feet. Most puffers prefer warm, shallow tropical and subtropical ocean waters. 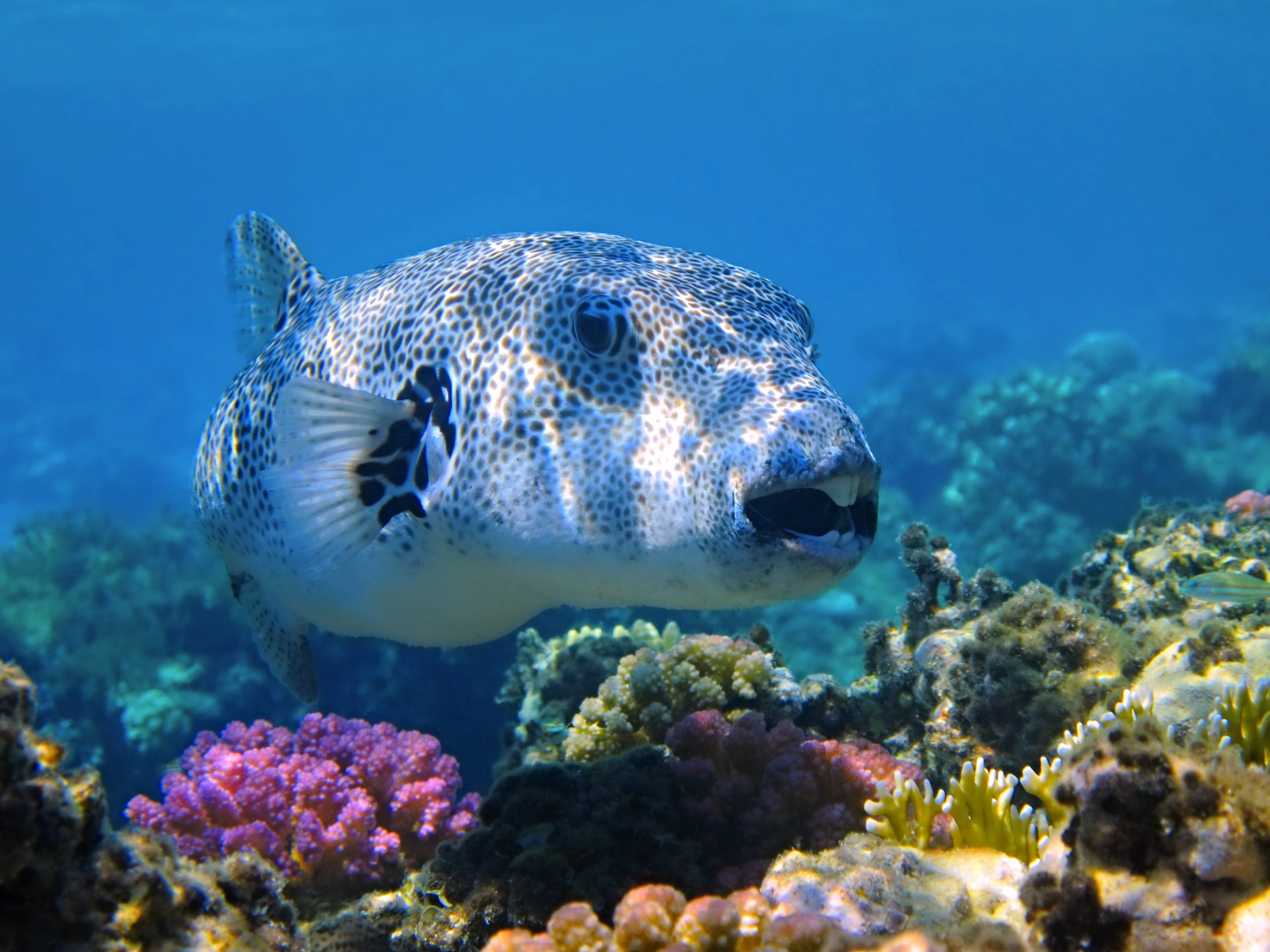 A large stellate pufferfish at a coral reef.

Do They Live in Freshwater?

Yes! While puffers live primarily in the ocean, there are species of pufferfish that live in brackish water. There are also 35 species of pufferfish that live exclusively in freshwater habitats. These types of puffers are restricted to the tropics and subtropics, mainly in South America, Africa, and Southeast Asia. Home aquarium enthusiasts enjoy these puffers. It is much easier to keep a freshwater aquarium than a saltwater aquarium, and the tiny pygmy pufferfish is a cute addition to these aquascapes.

Freshwater pufferfish prefer rivers to lakes. They thrive in the Amazon and the winding river complexes that lace Bangladesh and Myanmar.

Will Pufferfish Live in the Open Ocean?

Most puffers live close to land. In general, they like coral reefs, brackish water estuaries, and shallower waters. They can fare alright in protected seas, but not the open ocean. For example, pufferfish occupy the entire Gulf of Mexico but not the open waters of the expansive Atlantic and Pacific oceans.

How Far North Do Pufferfish Live?

The Northern Puffer, as its name implies, voyages further north than other species of puffers. It lives along the entire Eastern Seaboard of the U.S. It even reaches all the way up to Newfoundland in Canada! The northern pufferfish lives in protected areas, typically with brackish water.

The Chesapeake Bay is prime habitat for them, where they are caught for a small commercial fish market. The northern puffer doesn’t produce tetrodotoxin, making it safer for people to prepare and eat the fish.

Other northern-reaching pufferfish include species that inhabit the East Sea, which is between the Korean Peninsula and Japan.

El Niño, the winter weather pattern that causes waters on the Pacific Coast of the U.S. to warm, can change pufferfish distribution as well. The warm waters during an El Niño year can guide pufferfish from Baja California to venture as far north as Monterey Bay in Central California. While these individual fish are probably flukes amongst the greater population, perhaps they will migrate towards central California as the oceans warm due to climate change. 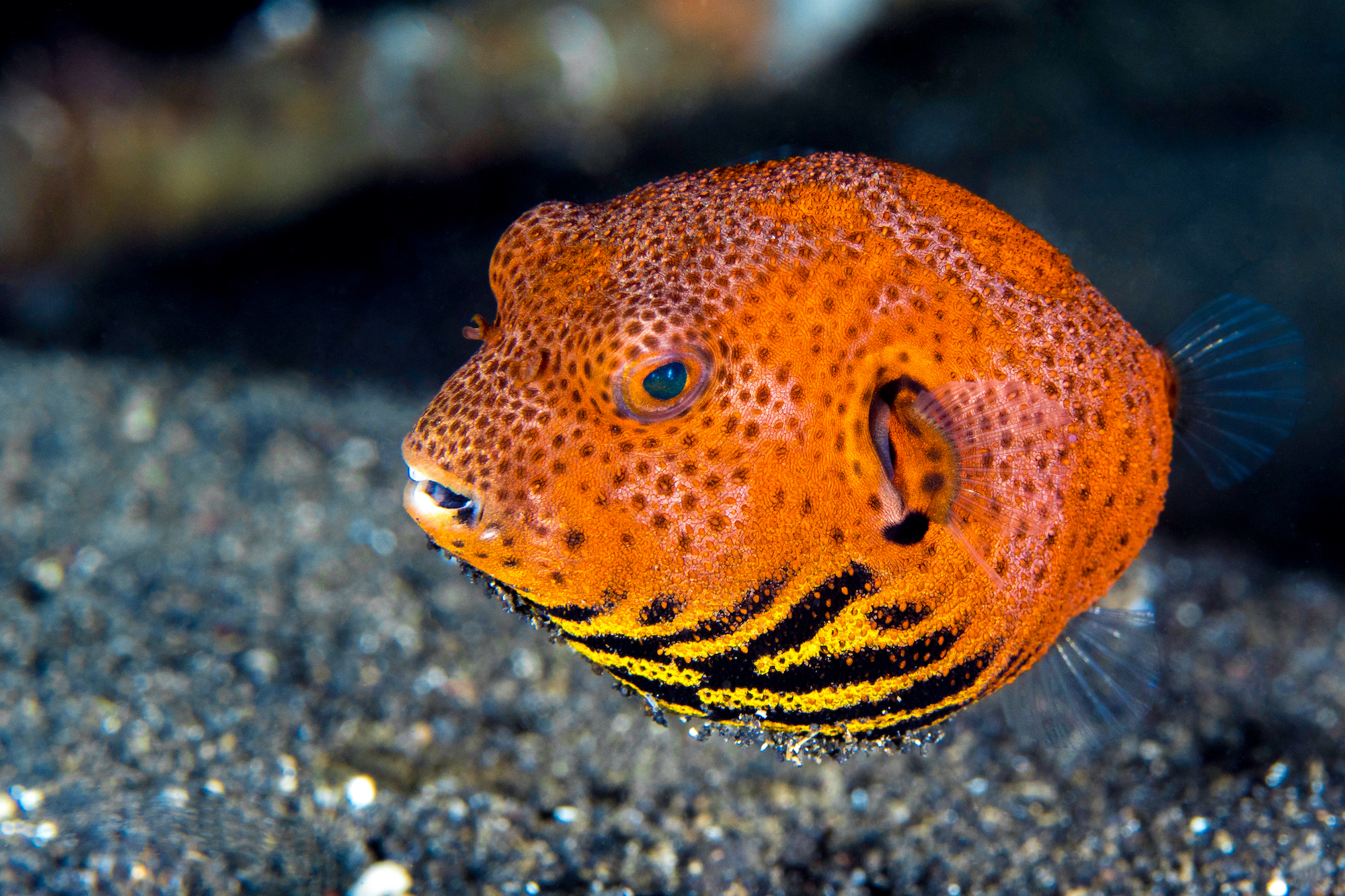 A striking orange puffer all puffed up.

Humans have shuffled thousands of species around the world during globalization. Puffers are no exception. A non-native pufferfish has appeared in the eastern part of the Mediterranean Sea. This puffer presents new challenges to countries like Lebanon. The fish has killed at least seven people with its toxin. It also has sharp teeth that can bite through fishing nets, causing problems for fishermen.

This puffer likely swam through the Suez Canal. This canal connects the Mediterranean to the Indian Ocean via the small bit of land that connects Egypt to the Middle East.

However, there are about a dozen species of puffers native to the Mediterranean, a few of which even live in the nearby fresh-water Black Sea.

How Can I See One of These Fish?

The easiest way to see a puffer is at an aquarium. In the wild, they are easiest to spot while snorkeling near a coral reef. If you see one out there, try to listen for their hard teeth cracking shellfish! It’s quite a loud sound. Be sure to bring a fish guide so you can identify which kind of puffer you see. Since there are 200 species, it can take some effort to identify the right one!