Why Do Beavers Build Dams? • Earth.com 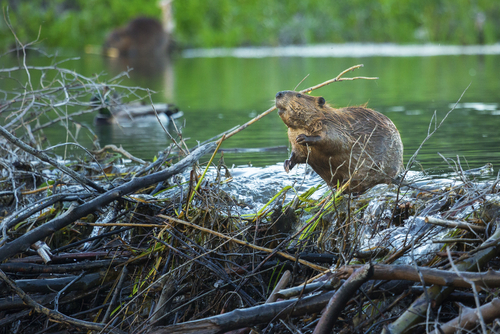 Why Do Beavers Build Dams?

Known for their paddle-like tails and gnawing down trees, beavers are nature’s architects. If you know anything about these funky rodents, it’s probably that they build dams. But why exactly do they fill waterways with sticks and mud? Beavers build dams to create a safe zone, protected from predators. But, contrary to popular belief, beavers don’t live in the dams. In fact, beaver dams are a means to an end. By creating the dam and slowing water flow, beavers create a new ecosystem with deep water and plenty of hidey-holes where they can go about their beaver business in peace. In this article, we’ve got all the beaver basics covered. Read on to learn about beaver ecology, their fascinating building behaviors, and their larger-than-life impact.

Beavers are the largest rodent in North America, and the second-largest in the world (the capybara of South America is heavier). A taxonomic group characterized by their continuously growing front teeth, all rodents need to chew. Rodents evolved to have extremely sharp and hard teeth, allowing them to develop diets and behaviors unavailable to other species. Orange teeth

Beavers slip seamlessly between water and land. In fact, their bodies have evolved for both environments. With dextrous front feet and webbed toes on their hind feet, they can grasp twigs, scurry on land, and swim quite nimbly. If that’s not enough beaver foot facts for you, here’s a bonus: beavers have a special double toenail on their hind feet adapted for preening. Beavers love to keep their soft fur meticulously clean, but it’s not all for vanity. All that combing with their preening toe keeps their fur waterproof and warm.

Perhaps their most identifiable characteristic is their tail. Wide, flat, and covered in tiny black scales, beavers use their tails as a rudder in the water and for balance on land. They will even slap their tails on the surface of the water to scare off predators.

Fun Fact: The shape and size of a beaver’s tail are hereditary traits. That means each family of beavers will have a distinctly different tail.

Fun Fact: During the Pleistocene, a species of giant beavers perused North America. Thought to be between 60-100kg, these animals were about the size of black bears!

Beavers are herbivorous, and they forage for vegetation both in and out of the water. They eat leaves, woody stems, and aquatic plants. Creatures of convenience, they like to eat the same plants that they use to build. They prefer the soft bendy branches of willow and aspen, but will make do with anything (including evergreens) in a pinch. As they add branches to their lodge and dam, they also squirrel some away in the mud below their lodge. These stores, called a larder, provide food throughout the winter when the beaver families are hunkered down.

Many members of the rodent order are pretty cute, but beaver babies might take the cake. Called kits, these fluffy little guys have so much warm fur when they are born that they can’t dive underwater. Their fur serves as a cuddly lifejacket, keeping them afloat. Born in the springtime in litters of 3-4, the kits will ride around on their mother’s tail as she walks on land or cling to her back while she swims.

Once a mother beaver gives birth to a group of kits, she’s in no hurry to kick them from the nest. Most beaver kits stay with their families for two years. That means a beaver lodge usually houses a pretty big family with two litters of kits at any given time. While the newborn beavers learn to swim and nibble trees, the yearlings are more likely to help with beaver lodge chores – keeping the dam in tact and the larder full! In the wild, beavers live between 10-12 years, but their legacy can last much longer. After a couple years in the home lodge, the young beavers will disperse to start their own home, changing the aqauscape throughout a watershed.

What Do Beavers Build?

Beavers, like humans, modify their habitat to be more comfortable and secure. Since they are semi-aquatic mammals, beavers escape predators by swimming under water. Naturally, deep water provides a much safer refuge than shallow streams. When a beaver moves into a riparian environment, they set to work.

They harvest their building materials including twigs, reeds, trunks of trees, branches, and mud. Through a process of careful weaving and caulking, they create a watertight dam. By creating a beaver dam, they slow down the flow of water and create a section of deeper water known as a beaver pond. Once the beavers ponds start filling up, the industrious rodents turn their attention to their lodge and larder, but the work is never done. Year after year, beavers will continue to add to their dam, making it longer and repairing any breaches.

While the beaver dam creates a suitable neighborhood, the beaver lodge is the beavers’ home-sweet-home. Similar to the dam, beavers make the lodge from sticks and twigs. But instead of clogging up the stream, the lodge serves as a cozy island home. Often built in the middle of the pond away from shore, lodges can measure over six feet high and over 30 feet in diameter. Inside the lodge, a small chamber serves as the living quarters. The beavers enter the lodge through underwater tunnels. That way,

It’s no question that beavers change their environments drastically. In making these new environments, their ecosystems rely on  them. Not only are beavers ecosystem architects, but they are also keystone species. Just like the keystone piece at the top of an archway holds the whole structure together, an ecosystem will collapse without the keystone species. Time and time again, studies repeatedly show how important beavers and their dams are to ecosystem health. They control water quality, create habitats for endangered species, and increase biodiverstiy.

Beaver dams have been shown to lower stream temperatures, playing a critical piece in the puzzle to restore fish populations that need cold water for their life cycles, like salmon and trout. In another study in Oregon’s Bridge Creek watershed, an increase in beaver activity restored the natural flood plain and improved the survival and productivity of steelhead trout populations.