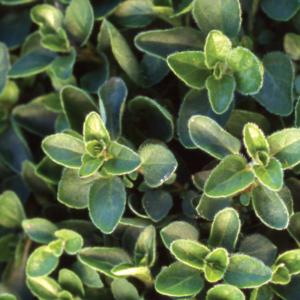 Origanum syriacum; syn. Majorana syriaca (also Origanum maru, although this primarily refers to a hybrid of O. syriacum), bible hyssop, Biblical-hyssop, Lebanese oregano or Syrian oregano, is an aromatic perennial herb in the mint family, Lamiaceae. The plant may be called za'atar by association with its use in a spice mixture. In Modern Hebrew, it is called ezob, and it may have been the ezob of Classical Hebrew. In many English translations of the Bible, ezov is rendered as hyssop, hence the common name for bible hyssop, believed to be a different plant generally identified with Hyssopus officinalis. The problems with identification arise from Jewish oral tradition where it expressly prohibits Greek hyssop, and where the biblical plant is said to have been identical to the Arabic word, zaatar (Origanum syriacum), and which word is not to be associated with other ezobs that often bear an additional epithet, such as zaatar farsi = Persian-hyssop (Thymbra capitata) and zaatar rumi = Roman-hyssop (Satureja thymbra) and zaatar mani = Calamint (Calamintha incana). It is a preferred primary ingredient in the spice mixture za'atar. So precious is this herb that in the Levant, Arabs will send out foraging parties to gather it. Origanum syriacum is harvested in the wild for use in preparing za'atar, a mixture of dried herbs, sesame and sumac for flavoring and garnish. However, it has recently entered cultivation due to high levels of demand. A study of the agronomic and chemical potential of O. syriacum subsp. sinaicum showed it to be superior to O. vulgare subsp. hirtum in herb and oil yields per acre. It also identified the major constituents of the essential oil of O. syriacum subsp. sinaicum as thymol, gamma-terpinene and p-cymene, in descending order.