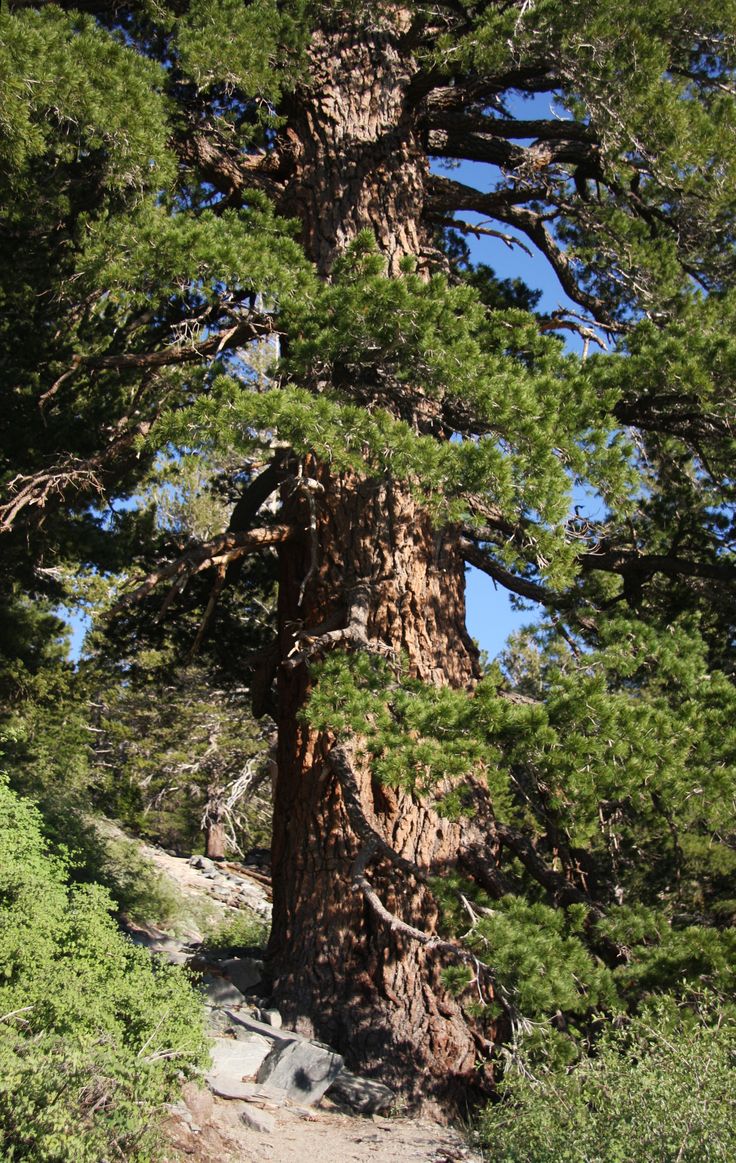 A pine is any conifer in the genus Pinus, /?pi?nu?s/, of the family Pinaceae. Pinus is the sole genus in the subfamily Pinoideae. The Plant List compiled by the Royal Botanic Gardens, Kew and Missouri Botanical Garden accepts 126 species names of pines as current, together with 35 unresolved species and many more synonyms. Pine trees are evergreen, coniferous resinous trees (or, rarely, shrubs) growing 3?80 m (10?260 ft) tall, with the majority of species reaching 15?45 m (50?150 ft) tall. The smallest are Siberian dwarf pine and Potosi pinyon, and the tallest is an 81.79 m (268.35 ft) tall ponderosa pine located in southern Oregon's Rogue River-Siskiyou National Forest. Pines are long-lived, and typically reach ages of 100?1,000 years, some even more. The longest-lived is the Great Basin bristlecone pine, Pinus longaeva. One individual of this species, dubbed "Methuselah", is one of the world's oldest living organisms at around 4,600 years old. This tree can be found in the White Mountains of California. An older tree, now cut down, was dated at 4,900 years old. It was discovered in a grove beneath Wheeler Peak and it is now known as "Prometheus" after the Greek immortal. Bark: The bark of most pines is thick and scaly, but some species have thin, flaky bark. The branches are produced in regular "pseudo whorls", actually a very tight spiral but appearing like a ring of branches arising from the same point. Many pines are uninodal, producing just one such whorl of branches each year, from buds at the tip of the year's new shoot, but others are multinodal, producing two or more whorls of branches per year. The spiral growth of branches, needles, and cone scales is arranged in Fibonacci number ratios.[citation needed] The new spring shoots are sometimes called "candles"; they are covered in brown or whitish bud scales and point upward at first, then later turn green and spread outward. These "candles" offer foresters a means to evaluate fertility of the soil and vigour of the trees. Foliage: Pines have four types of leaf: Seed leaves (cotyledons) on seedlings are borne in a whorl of 4?24. Juvenile leaves, which follow immediately on seedlings and young plants, are 2?6 cm long, single, green or often blue-green, and arranged spirally on the shoot. These are produced for six months to five years, rarely longer. Scale leaves, similar to bud scales, are small, brown and not photosynthetic, and arranged spirally like the juvenile leaves. Needles, the adult leaves, are green (photosynthetic) and bundled in clusters called fascicles. The needles can number from one to seven per fascicle, but generally number from two to five. Each fascicle is produced from a small bud on a dwarf shoot in the axil of a scale leaf. These bud scales often remain on the fascicle as a basal sheath. The needles persist for 1.5?40 years, depending on species. If a shoot is damaged (e.g. eaten by an animal), the needle fascicles just below the damage will generate a bud which can then replace the lost leaves. Cones: Pines are mostly monoecious, having the male and female cones on the same tree, though a few species are sub-dioecious, with individuals predominantly, but not wholly, single-sex. The male cones are small, typically 1?5 cm long, and only present for a short period (usually in spring, though autumn in a few pines), falling as soon as they have shed their pollen. The female cones take 1.5?3 years (depending on species) to mature after pollination, with actual fertilization delayed one year. At maturity the female cones are 3?60 cm long. Each cone has numerous spirally arranged scales, with two seeds on each fertile scale; the scales at the base and tip of the cone are small and sterile, without seeds. The seeds are mostly small and winged, and are anemophilous (wind-dispersed), but some are larger and have only a vestigial wing, and are bird-dispersed (see below). At maturity, the cones usually open to release the seeds, but in some of the bird-dispersed species (e.g. whitebark pine), the seeds are only released by the bird breaking the cones open. In others, the seeds are stored in closed ("serotinous") cones for many years until an environmental cue triggers the cones to open, releasing the seeds. The most common form of serotiny is pyriscence, in which a resin binds the cones shut until melted by a forest fire.