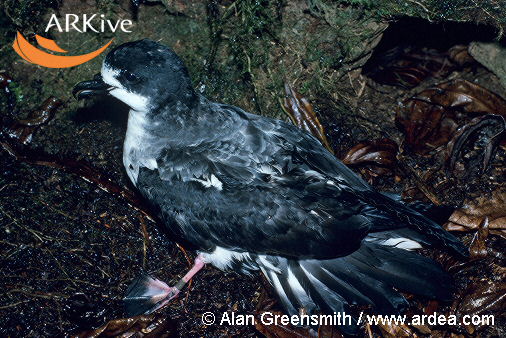 Pterodroma phaeopygia NatureServe Explorer Species Reports -- NatureServe Explorer is a source for authoritative conservation information on more than 50,000 plants, animals and ecological communtities of the U.S and Canada. NatureServe Explorer provides in-depth information on rare and endangered species, but includes common plants and animals too. NatureServe Explorer is a product of NatureServe in collaboration with the Natural Heritage Network. The Galápagos petrel is one of the six endemic seabirds of the Galápagos. Its scientific name derives from Ancient Greek: Pterodroma originates from pteron and dromos, meaning "wing" and "runner", and phaeopygia comes from phaios and pugios, meaning "dusky" and "rump". Members of Pterodroma genus are also called the gadfly petrels because their erratic twisting and turning in flight resemble that of gadflies. ITIS Reports -- ITIS (the Integrated Taxonomic Information System) is a source for authoritative taxonomic information on plants, animals, fungi, and microbes of North America and the world. FWS Digital Media Library -- The U.S. Fish and Wildlife Service's National Digital Library is a searchable collection of selected images, historical artifacts, audio clips, publications, and video. The Galápagos and Hawaiian petrels are very similar. They are large, long-winged gadfly petrels with an overall dark-gray topside which darkens gradually towards the tip of the wings and tail. A narrow white line on each side of their rump is often present. The species are also characterized by a distinct black hood that extends to the sides of their neck. In contrast, their face and underparts are white,

No recovery information is available for the Galapagos petrel.
Back to full archive