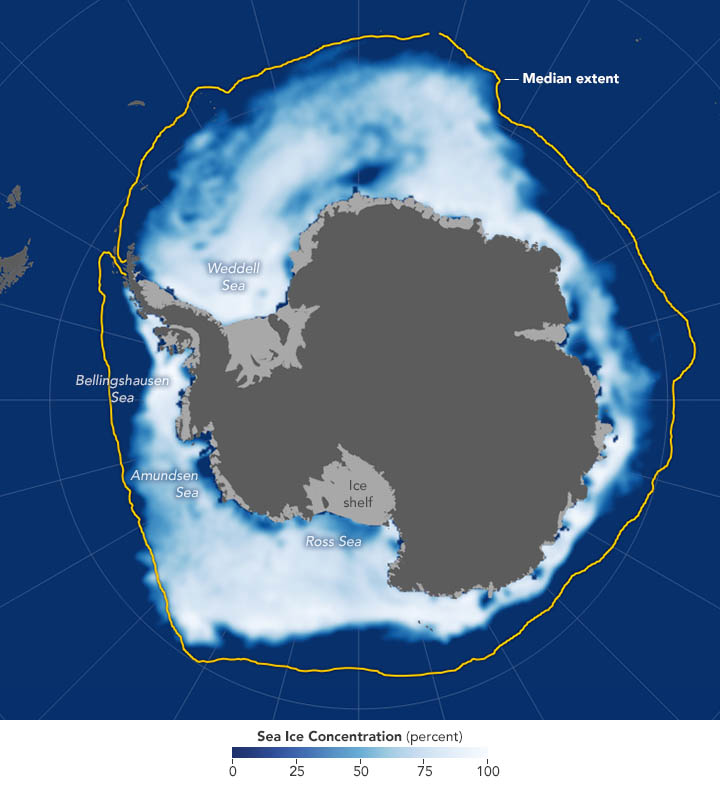 The concentration of sea ice around Antarctica reached a record low this November, according to NASA.

The Arctic Ocean and surrounding bodies of water often refreeze this time of year once the summer melting is complete. Oppositely, the sea ice around Antarctica, which is located on the opposite pole, is usually melting.

But warm air and changing winds have caused an unusual amount of melting in the Antarctic so far, resulting in a smaller area being covered by ice – what scientists call the “ice extent.”

November’s ice extent averaged to about 5.6 million square miles, according to NASA’s data. This average was about 699,000 square miles below the average between 1981 and 2010.

The Antarctic ice hit its annual maximum extent on Aug. 31, 2016, and the melt season started after that. By November, the ice had reached daily record lows due to temperatures about 4 to 7 degrees higher than normal.

Winds that usually break up the ice instead changed direction and compacted it in different areas.

Sea ice usually hits its annual minimum extent in February, according to the article, but this season may very well be different because of this season’s low ice cover.

There has been a global decline in sea ice since 1979, despite the Antarctic sea extent increasing about 1 percent annually.

The Antarctic ice is not alone, however. Record lows for ice cover were also present in the Artic Ocean.

“The October freeze-up was very slow and that continued through much of November,” said Walt Meier, a sea ice scientist at NASA’s Goddard Space Flight Center.

The Arctic sea ice extent averaged about 3.52 million square miles, which is the lowest extent ever for the month of November. This is due to shifting water temperatures, air temperatures and wind patterns.

The ice extent in October was also the lowest on record, and the annual minimum – hit on Sept. 10, 2016 – was the second lowest.

The low records can be attributed to warm oceans, caused by the absorption of solar energy throughout the summer.

“Until that heat escapes to the atmosphere, sea ice cannot form,” the article states.

Air temperatures also play a role in the formation of sea ice because the ice and the surrounding water affect them.

“In addition to bringing in warm air, the winds have helped keep the ice edge from pushing southward,” Meier said. “There may also be an effect of the winds pulling in warmer ocean waters from the south.”