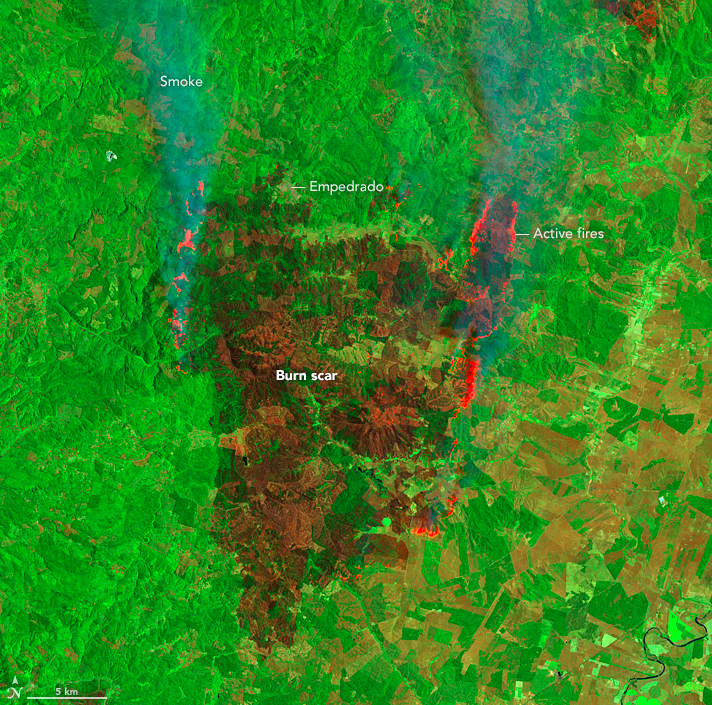 Today’s Image of the Day comes thanks to the NASA Earth Observatory and features the devastating Chile wildfires that have been ravaging the country since mid-January.

Historically, wildfires are fairly common and cyclical during Chile’s dry season. According to the Moderate Resolution Imaging Spectroradiometer (MODIS) on NASA’S Aqua satellite, an average of 330 daytime fire hot spots popped up during the month of January from 2003 to 2016.

This year, however, that number has jumped to ten times as many.

“This is unprecedented from my perspective. The smoke plumes are huge in abundance and altitude,” said Michael Fromm, meteorologist from the Naval Research Laboratory “Fires have gotten much larger and much more energetic than typical for that area.”

Smoke from the Chile wildfires has spread hundreds of thousands of kilometers, even as far as the Central South Pacific. As of the end of January, the wildfires had burned roughly 580,000 hectares. Many communities remain on red alert with over 123 active forest fires burning on February 2nd. Of that number, 68 have been controlled and 12 extinguished.

So far, the fires have killed 11 people and destroyed nearly 1,500 homes. Chilean Finance Minister Rodrigo Valdes told reporters Friday that the damage could cost the government as much as $333 million.

“Those are the costs that the state will have to assume in the preliminary estimate that we’re doing,” Valdes said. “That situation can change when we have more information, and it will depend on how the wildfires evolve.”

Strong winds have made it challenging for firefighting crews to make significant progress in extinguishing the blazes. Several Boeing 747-400 supertankers from the U.S., Russia, and Brazil have been used in flyover efforts.