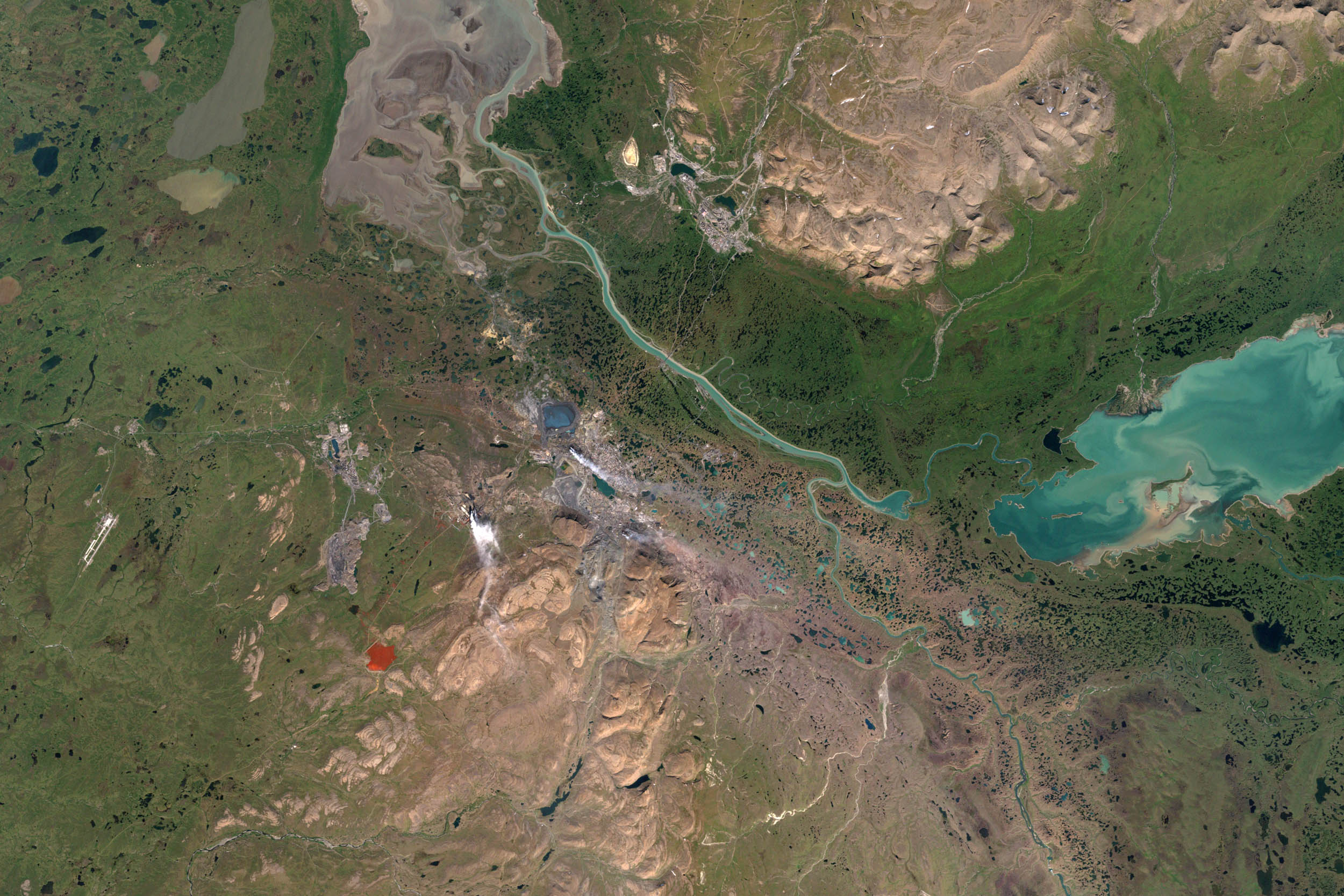 Yet, such color changes are hardly anomalous. Satellite imagery shows that waterways near the Siberian town blushed red long before they achieved internet virality in 2016. Combined with ground reports and scientists’ observations, the space-based images reveal that these waterways have changed color several times in recent decades.

Landsat satellites have collected images of red discoloration in the waters around Noril’sk on multiple dates, including July 2015, July 2014, August 2013, July 1998, and September 1997. The images show the river in warmer months, before the water freezes and polar darkness descends. Wintertime temperatures in Noril’sk average -31° Celsius (-24° Fahrenheit).

Gareth Rees, a researcher at Cambridge University, saw the discoloration firsthand when he visited Noril’sk in the mid-1990s. “During the fieldwork, my colleagues and I noted at least one river that was running red, and [we saw] areas of drying-out red sediment,” he wrote in an email. “These effects are very marked and widespread and can be mapped using remote sensing methods.”

Tucked away in an isolated corner of Siberia, the city sits atop vast underground deposits of metals. The Nadezhda Metallurgical Plant has been active since 1979, when it was built on the site of a former airport. The plant, which has been mentioned as a possible source of the water discoloration, is among the world’s largest producers of nickel and platinum group metals. It has also been cited as one of the world’s worst pollution hotspots.

Some media reports have linked the river’s red hue to iron oxide (rust), also found in the nickel deposits. While Russian investigators have yet to conclude their inquiry into the matter, Russia’s Ministry of Natural Resources pointed to the rupture of a slurry pipeline (containing waste material) as a plausible cause of discoloration. Poor construction and thermomechanical stresses—like pipes shifting due to thawing permafrost—can contribute to pipelines bursting, researchers noted.

The image above, acquired by Landsat 7 in August 2001, mirrors one taken in August 2016 (top of the page) by the Operational Land Imager (OLI) on Landsat 8. Both images show red water trailing for several kilometers along the length of a slurry pipeline leading from the Noril’sk smelters to a tailings pond (a storage facility for chemical waste) in the mountain foothills. The red color follows the course of the Daldykan River, which passes underneath the pipeline. Nearby, a long white smoke plume rises from a metal smelting plant.

Pollution around Noril’sk goes beyond its red rivers, said NASA researcher Nickolay Krotkov. The smelters represent “one of the largest, if not the largest, anthropogenic sulfur dioxide source that is clearly seen by satellites,” according to a recent study. Satellite measurements collected by the OMI instrument on NASA’s Aura satellite in 2005 showed a bright patch of SO2 surrounding the plant. A 2008 study published in Eurasian Soil Science described the territory around Noril’sk as “characterized by high concentrations of heavy metals, the absence of trees, and the disturbance of the organic matter mineralization.”

In a September 2016 press release, the managers of Norilsk Nickel said: “As far as we know, the color of the river today is no different from usual.”

The company has since stated that heavy rains on September 5 caused water to flood over a filtration dam. The runoff, representatives said, was not harmful.