Dust Storm on the Gulf of Oman 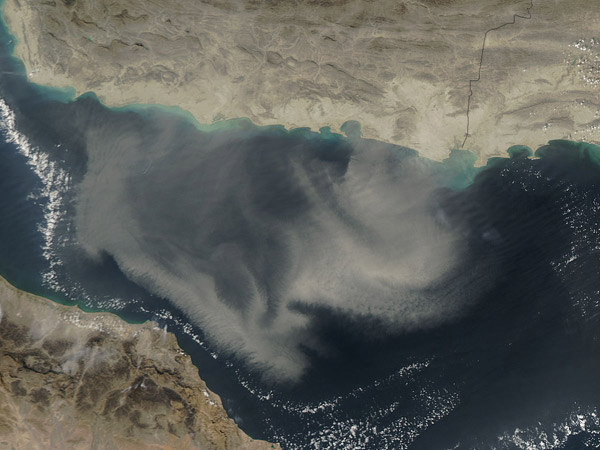 Dust Storm on the Gulf of Oman. A veil of wind-swept dust curls out over the Gulf of Oman in this Moderate Resolution Imaging Spectroradiometer (MODIS) image acquired on November 16, 2003 by the Aqua satellite. The dust, seen as tan pixels, is coming from Iran, just north of the Gulf.

Oman , officially the Sultanate of Oman , is an Arab country on the southeastern coast of the Arabian Peninsula in Western Asia. Its official religion is Islam.

Holding a strategically important position at the mouth of the Persian Gulf, the country shares land borders with the United Arab Emirates to the northwest, Saudi Arabia to the west, and Yemen to the southwest, and shares marine borders with Iran and Pakistan. The coast is formed by the Arabian Sea on the southeast and the Gulf of Oman on the northeast. The Madha and Musandam exclaves are surrounded by the UAE on their land borders, with the Strait of Hormuz (which it shares with Iran) and Gulf of Oman forming Musandam’s coastal boundaries.