Gulf Of Oman And The Persian Gulf 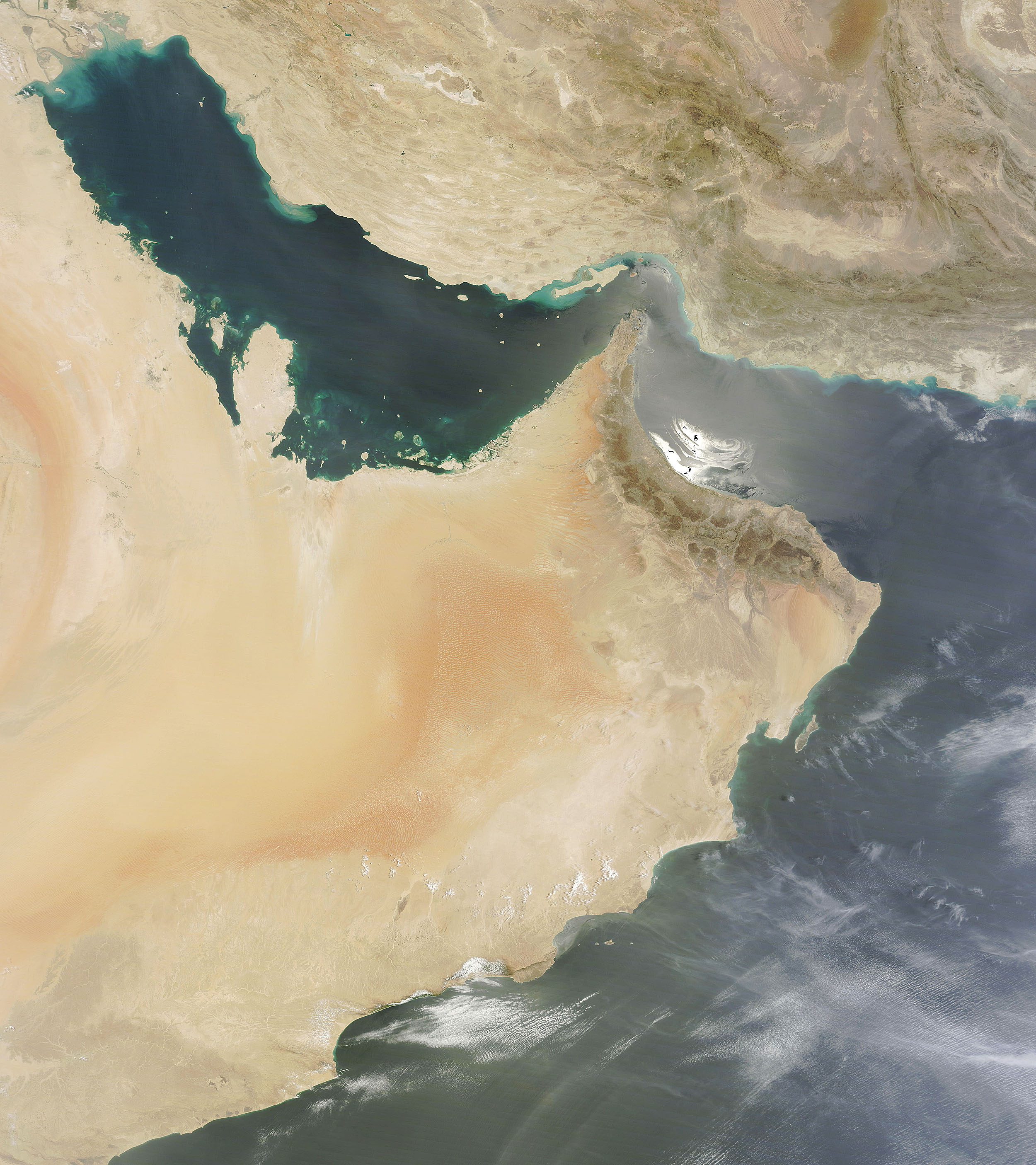 On July 16, 2015 the Moderate Resolution Imaging Spectroradiometer (MODIS) aboard NASA’s Terra satellite captured a striking true-color image of a sunny summer day over the Persian Gulf and Gulf of Oman.

The Gulf of Oman is an open arm of the Indian Ocean which connects to the semi-enclosed Persian Gulf via the small, but economically important, Strait of Hormuz. These waters are bounded by Iran to the north and the Arabian Peninsula in the south. Broad expanses of tan, pink and white desert can be seen across the Arabian Peninsula and, especially noteworthy, ripples of large sand dunes can be seen in the eastern region of Saudi Arabia. At the tip of the Persian Gulf, in the north, touches of green marks the wetlands and rivers of Mesopotamia. The Gulf itself sits on the edge of the Arabian Plate, the slab of earth that carries much of the Middle East. The Arabian Plate is moving slowly northeast under the Eurasian Plate. The edge of the overriding Eurasian Plate is folding and buckling under the pressure, created the rough folds of the Zagros Mountains of Iran.

The blue waters of the region are discolored by cloud of tan, blue and green. Near the shore, these colors are most likely sediment which is flowing into the Gulf. Sediment appears tan near the surface, then green and finally blue as it sinks and disperses. The waters are shallow in the north and along the southwestern shore, so some of the sediment may also be lifted from the bottom of the Gulf. The shiny silver and white colorations in the Gulf of Oman are the result of sunglint – the mirror-like reflection of sun off the water in a satellite image.

Summer in the region is a time of intense heat, with little relief from shore-side breezes. The water in the Persian Gulf registers about 90˚F (32˚C) in summer and offers little cooling effect. Indeed, it brings extremely high humidity to the region, making hot air temperatures feel even hotter. Late in July, a heat wave brought extremely high temperatures to the region. The highest temperature was registered in Bandar Mahshahr, a city that sits in southwestern Iran and adjacent to the Persian Gulf, near the far northwest corner of this image. On July 30, the air temperature reached 109˚F (43 ˚C). The extreme humidity helped drive the heat index to about 154 ˚F (67.8 ˚C).