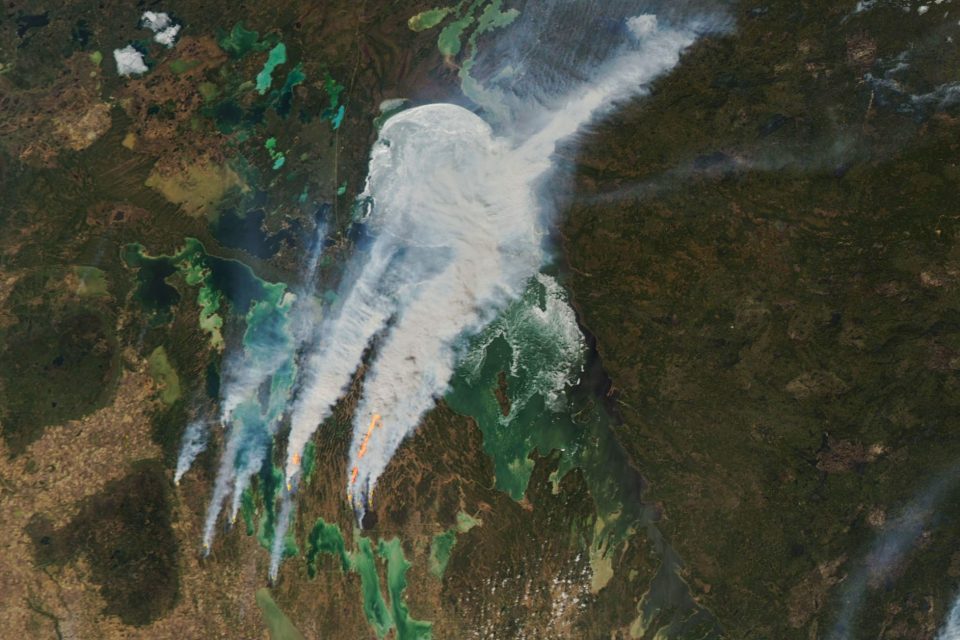 On May 14, 2021, winter ice still covered most of the lake, as well as the smaller lakes nearby. Just days later on May 19, most of the ice was gone and temperatures hovered between 86 and 91 degrees Fahrenheit. North America is a continent entirely within the Northern Hemisphere and almost all within the Western Hemisphere. It can also be described as the northern subcontinent of the Americas. It is bordered to the north by the Arctic Ocean, to the east by the Atlantic Ocean, to the southeast by South America and the Caribbean Sea, and to the west and south by the Pacific Ocean. Because it is on the North American Tectonic Plate, Greenland is included as part of North America geographically. North America covers an area of about 24,709,000 square kilometers (9,540,000 square miles), about 16.5% of the Earth’s land area and about 4.8% of its total surface. North America is the third-largest continent by area,

According to NASA, strong westerly winds drove the plumes across Hudson Bay and the Canadian interior as far as Quebec.

Much of southern Manitoba is currently in a state of severe to extreme drought. John Pomeroy is a water resources researcher at the University of Saskatchewan. He told CBC News that soil moisture is about 40 percent of normal.

The image was captured on May 18, 2021, the Moderate Resolution Imaging Spectroradiometer (MODIS) on NASA’s Aqua satellite.