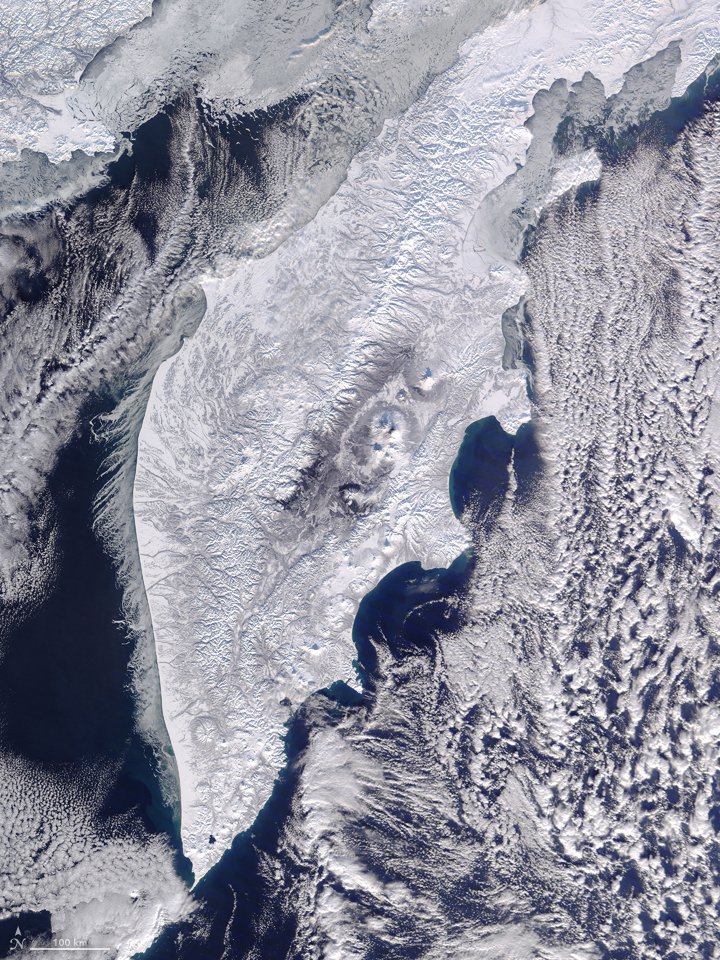 Today’s Image of the Day comes courtesy of the NASA Earth Observatory and features the beautifully snow-covered Kamchatka Peninsula, located in a remote part of the Russian Far East. The photo was taken on a clear day last month by the Moderate Resolution Imaging Spectroradiometer (MODIS) on NASA’s Aqua satellite.

The Kamchatka Peninsula measures 780 miles in length, containing 100,00 square miles of land located in between the Pacific Ocean and the Sea of Okhotsk. A string of 160 volcanoes line the east side of the peninsula, 29 of which are currently active. The highest volcano, Klyuchevskaya Sopka, claims the title of the largest active volcano in the Northern Hemisphere.

Off the southeast coast of the peninsula lies the Kuril-Kamchatka Trench, which formed as a result of a subduction zone. In addition to causing severe volcanism, the trench has triggered massive earthquakes and tsunamis, most notably an 8.2 earthquake in November 1952.

Kamchatka receives roughly 110 inches of precipitation each year. Although the peninsula lies along the same latitude as the UK, arctic winds from Siberia mix with the cold Oyashio sea current to keep the area snow covered from October until June.

Because the climate ranges from subarctic to temperate, the peninsula is home to a diverse array of wildlife. Kamchatka is particularly famous for its abundance of large brown bears, of which there are an estimated 3 to 4 per 100 square kilometers. The area is also home to such notable animals as the tundra wolf, Arctic fox, wolverine, sable, Eurasian otter, East Siberian lynx, and reindeer.

In September 1983, the Soviet Union famously shot down Korean Air Lines Flight 007, a commercial jet en route from New York City to Seoul, South Korea via Anchorage after it flew through Soviet prohibited airspace just off the coast of the Kamchatka Peninsula.