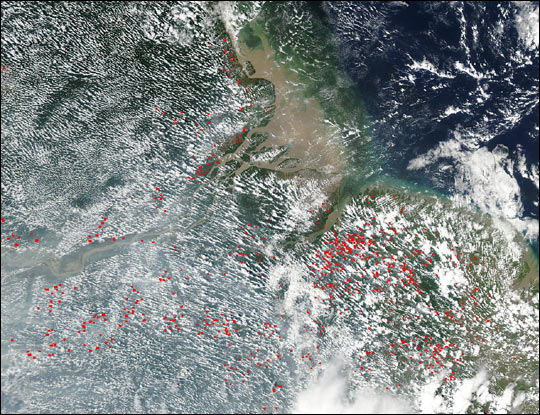 In northeastern Brazil, the dry season is coming to a close with scores of fires (red dots) crackling across the tropical landscape. This true-color Moderate Resolution Imaging Spectroradiometer (MODIS) image was captured by the Aqua satellite on November 24, 2002. In the bottom left is northeastern Brazil, over which hover repeating patterns of small, puffy clouds. The Atlantic Ocean is at upper right, and the tan-colored sediment from the Amazon River is swirling near the coastline. In roughly mid-December, the rainy season will begin and last until May.

Brazil is the largest country in both South America and Latin America. Also At 8.5 million square kilometers (3.2 million square miles) and with over 208 million people. Brazil is the world’s fifth-largest country by area and the fifth most populous. Its capital is Brasília, and its most populated city is São Paulo. The federation is composed of the union of the 26 states, the Federal District, and the 5,570 municipalities. It is the largest country to have Portuguese as an official language and the only one in the Americas; it is also one of the most multicultural and ethnically diverse nations, due to over a century of mass immigration from around the world.