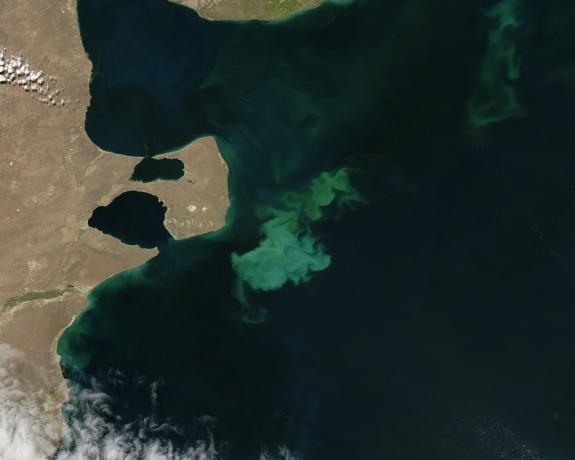 Phytoplankton bloom off Argentina with brilliant streaks of blue and duller swirls of green color the South Atlantic Ocean in this Terra MODIS image acquired on January 4, 2005. The colors are a result of millions of microscopic plants growing near the surface of the water.

Generally called phytoplankton, some varieties of the plants, called coccolithophores, are coated with white scales. When viewed through the ocean waters, the floating white plants appear blue. In places, chlorophyll gives the waters a green tint.

Phytoplankton blooms are common where cold ocean currents carry nutrients from the bottom of the ocean to the surface. In this case, the bloom has developed in the Falkland or Malvinas Current, which sweeps north from Antarctica. Additional nutrients are fed into this part of the ocean by the Rio de la Plata, which empties into the Atlantic immediately west of the region shown in this image.

The influx of nutrients allows large blooms to develop frequently in this section of the southern Atlantic, off the coast of Argentina and Uruguay. As a primary food source for many fish, the blooms support a strong marine ecosystem.