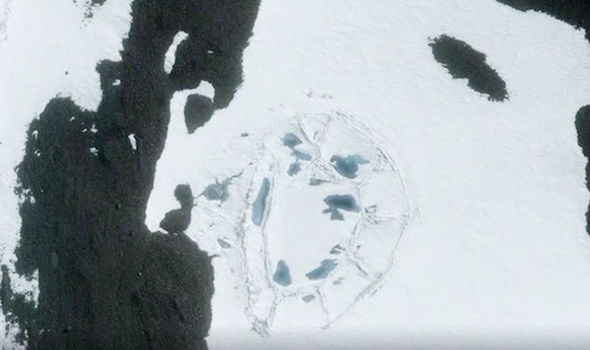 Today’s Image Of The Day shows what appears to be ancient fort buried beneath snow and ice in Antarctica.

A recently discovered Google Earth satellite image taken from the depths of Antarctica has left many wondering if an ancient civilization once inhabited the desolate region.

The photo shows what looks like the top of a large building measuring about 400 feet in width. The oval-shaped structure has drawn numerous comparisons to the motte-and-bailey castles of the medieval period. The almost-perfect symmetrical layout has left many convinced it had to have been a manmade ancient fort.

Some scientists initially believed the structure to be a sastrugi, a phenomenon that occurs naturally after years of heavy snowfall and strong winds. However, sastruga always form in the direction of the wind as opposed to the perfect oval shown in the satellite image.

Rumors of ancient civilizations in Antarctica have existed for years. In the early 1800s, a detailed map of the region was discovered having been drawn by a Turkish admiral.

“These are clearly features of some sort of human-made structure, resembling some sort of pyramidal structure,” said Ashoka Tripathi of the Department of Archaeology at the University of Calcutta. “The patterns clearly show nothing we should expect from natural geomorphological formations found in nature. We clearly have here evidence of human engineering.

“The only problem is that these photographs were taken in Antarctica under 2km of ice. That is clearly the puzzling part, we do not have any explanation for this at the moment. These pictures just reflect a small portion of Antarctica’s total land mass. There are possibly many other additional sites that are covered over with ice. It just shows us how easy it is to underestimate both the size and scale of past human settlements.”