Sanba Over the Korean Peninsula 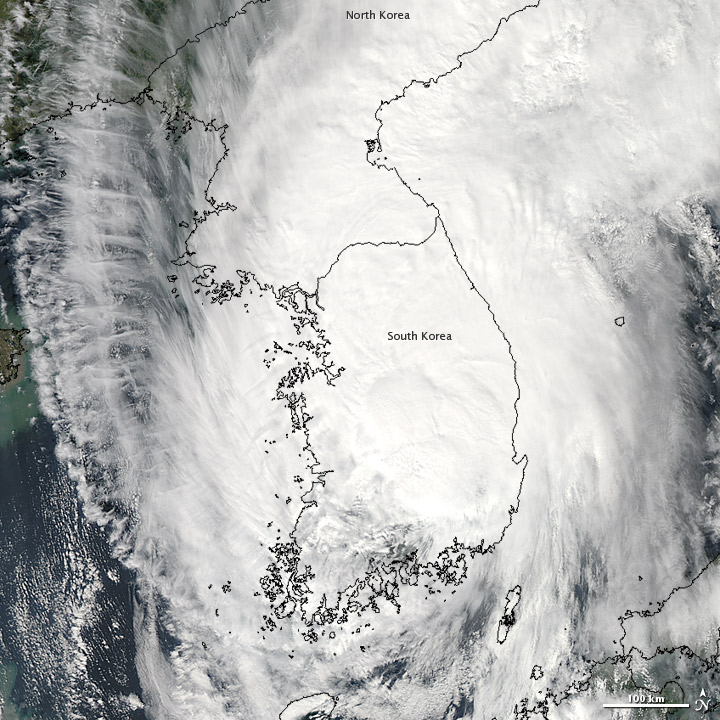 When Sanba made landfall in South Korea on September 17, 2012, it brought heavy rains and high winds, downed power lines, grounded hundreds of flights, and halted ferry services. One person was killed and another was injured in landslides caused by the storm.

The Moderate Resolution Imaging Spectroradiometer (MODIS) on NASA’s Aqua satellite captured this natural-color image on September 17, when Sanba’s clouds engulfed the Korean Peninsula. The same day, the U.S. Navy’s Joint Typhoon Warning Center reported that the storm’s sustained winds had dropped to 45 knots (85 kilometers per hour). The projected storm track showed Sanba continuing to moKorea is a region in East Asia[3] consisting of the Korean Peninsula, Jeju Island, and several minor islands near the peninsula. Korea has been divided since 1948 between two distinct sovereign states, North Korea and South Korea. Korea is bordered by Russia to the northeast, China to the northwest, and neighbours Japan to the east via the Korea Strait and the Sea of Japan (East Sea).