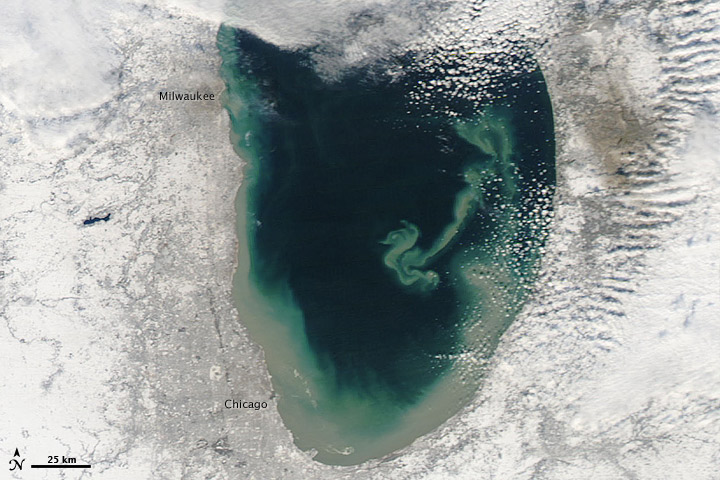 In mid-December 2010, suspended sediments transformed the southern end of Lake Michigan. Ranging in color from brown to green, the sediment filled the surface waters along the southern coastline and formed a long, curving tendril extending toward the middle of the lake. The Moderate Resolution Imaging Spectroradiometer (MODIS) on NASA’s Aqua satellite captured these natural-color images on December 17, 2010 (top), and December 10, 2010 (bottom).

Such sediment clouds are not uncommon in Lake Michigan, where winds influence lake circulation patterns. A scientific paper published in 2007 described a model of the circulation, noting that while the suspended particles mostly arise from lake-bottom sediments along the western shoreline, they tend to accumulate on the eastern side. When northerly winds blow, two circulation gyres, rotating in opposite directions, transport sediment along the southern shoreline. As the northerly winds die down, the counterclockwise gyre predominates, and the smaller, clockwise gyre dissipates. Clear water—an apparent remnant of the small clockwise gyre—continues to interrupt the sediment plume.

George Leshkevich, a researcher with the U.S. National Oceanic and Atmospheric Administration, explains that the wind-driven gyres erode lacustrine clay (very fine lakebed sediment) on the western shore before transporting it, along with re-suspended lake sediments, to the eastern shore. On the eastern side, the gyre encounters a shoreline bulge that pushes it toward the lake’s central southern basin, where it deposits the sediments.