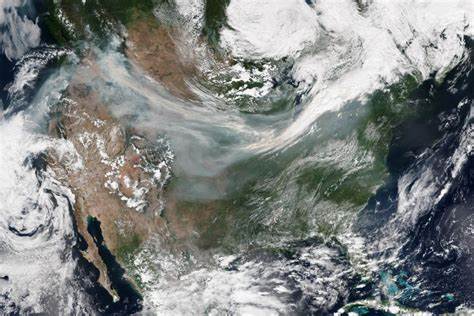 Smoke from Alaska Fires off U.S. East Coast. This true-color image of the United States’ eastern seaboard was acquired by the Moderate Resolution Imaging Spectroradiometer (MODIS) on NASA’s Aqua satellite. The scene offers a space-based perspective on what people on the ground up and down the U.S. coast observed firsthand on July 21, 2004the air overhead was very hazy that day. The haze is due to smoke being generated by widespread and intense wildfires burning in Alaska. The smoke has spread all across North America and is now being swept eastward over the Atlantic Ocean.
The high-resolution image available here is 500 meters per pixel. Copies of this scene at other resolutions are also available.

Its most extreme western part is Attu Island, and it has a maritime border with Russia (Chukotka Autonomous Okrug) to the west across the Bering Strait. To the north are the Chukchi and Beaufort seas—southern parts of the Arctic Ocean. The Pacific Ocean lies to the south and southwest. It is the largest U.S. state by area and the seventh largest subnational division in the world. In addition, it is the 3rd least populous and the most sparsely populated of the 50 United States; nevertheless, it is by far the most populous territory located mostly north of the 60th parallel in North America: its population—estimated at 738,432 by the United States Census Bureau in 2015—is more than quadruple the combined populations of Northern Canada and Greenland. Approximately half of Alaska’s residents live within the Anchorage metropolitan area. Smoke from Alaska Fires off U.S. East Coast happen frequently.