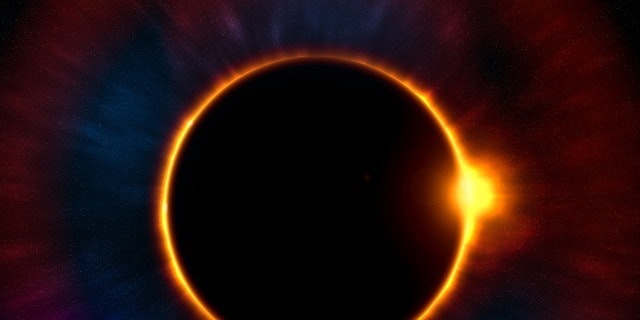 On October 3, 20005, observers in Europe and Africa, as well as parts of Asia, saw a partial solar eclipse over North Africa. Solar eclipses occur when the Earth, Moon, and Sun are all in a straight line with the Moon in the middle. This particular eclipse was an annular or ring eclipse, which occurs when the Moon passes in front of the Sun and blocks the only the center, leaving an outer ring visible to an observer on Earth.

Although the Moon is about 400 times smaller than the Sun, it is also about 400 times closer, so both celestial objects appear to be about the same size to us. However, the Moon´s orbit is elliptical (like a horse racetrack), not circular, meaning that sometimes it is closer to us and sometimes it is farther away. If the eclipse occurs when the Moon is closer, it will appear larger and therefore block the Sun entirely Ã¢â‚¬â€œ creating a total eclipse- while eclipses occurring when the Moon is farther away produces partial or ring eclipses. Eclipses occur about every 18 months or so and generally last for only several minutes.