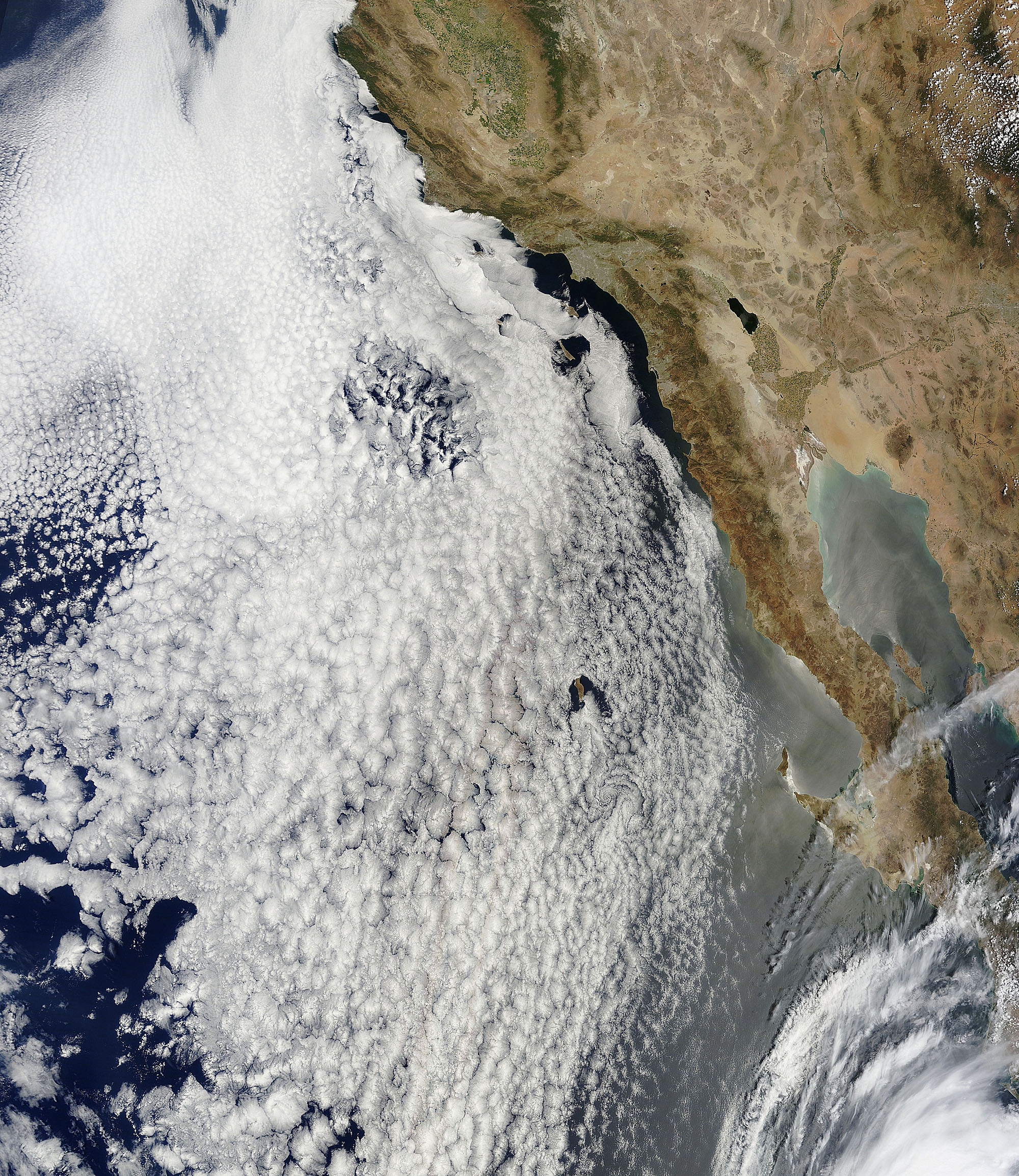 Despite large banks of moisture-filled marine stratocumulus clouds hovering just off-shore, the landscape of southern California and Mexico was a portrait in various shades of tan, indicating arid land with little vegetation in mid-July, 2015.

The Moderate Resolution Imaging Spectroradiometer (MODIS) aboard NASA’s Terra satellite captured this true-color image on July 16. Mexico’s Baja California lies in the south, as well as the mainland of Mexico. The Colorado River runs from north to south well inland, and appears dark blue in the north with green vegetation in its flood plain, especially in the southern reaches of the river. This southern stretch of the Colorado River separates Arizona from California.

In California, the most prominent body of water is the footprint-shaped Salton Sea. This lake lies about 3 hours driving time east of San Diego and was created in 1905 from an accidental break in a canal used to divert water from the Colorado River for agricultural use. When the canal was broken, the water flowed into a basin that lay 230 feet below sea level. The resulting lake became a popular tourist town in the 1950s, and remains an area of great importance for birds, providing habitat for over 400 species. However, the effects of the current extreme drought as well as the diversion of water away from the Imperial Valley (the agricultural region in which the Sea lies) to other states is causing the Salton Sea to begin to dry up. Tinges of green, both north and south of the Sea, indicate vegetation growth – most likely irrigated agriculture. Further north green graces the ridges of the Sierra Nevada mountain range, and also the agricultural region of the San Joaquin Valley.

California is entering the fourth year of an extreme and record-breaking drought. According to the U.S. Drought Monitor, most of the state’s land captured in this image is either in Extreme or Exceptional Drought categories. Governor Jerry Brown declared a drought State Of Emergency in January, 2015, and California has implemented measures to cope with the situation, but the effects are far reaching. One such effect is subsidence of land as the groundwater underneath is pumped out for use. According to a recent report released from the California Department of Water Resources (DWR), land in the San Joaquin valley has been subsiding substantially – as much as 2 inches a month – in some locations due to groundwater pumping. The report, prepared for the DWR by NASA’s Jet Propulsion Laboratory located in Pasadena California can be found at: http://water.ca.gov/groundwater/docs/NASA_REPORT.pdf