Tornado Tracks in Mississippi and Alabama 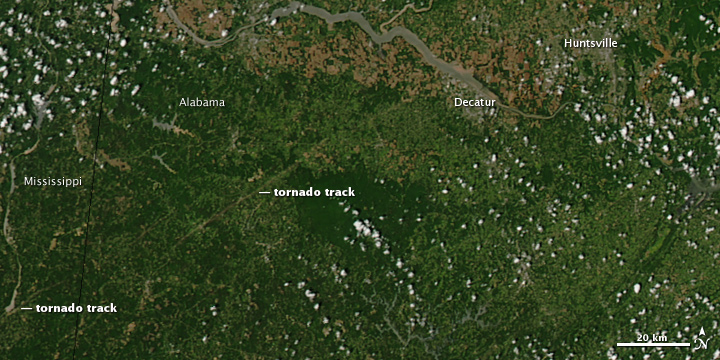 Among the more than 150 tornadoes reported on April 27 and 28, 2011, was a rare EF-5 storm. Such a storm has the capacity to collapse a concrete building. The tornado hit Smithville, Mississippi, where it killed at least 14 people, and moved northeast nearly 3 miles toward the Alabama border. It is the first EF5 tornado to occur in Mississippi since 1966, according to the National Weather Service.

This image shows the path of exposed ground left in the tornado’s wake. The trail left by the EF5 tornado in Mississippi is much shorter than a similar trail that cuts across northwestern Alabama. The National Weather Service rated this tornado at EF4, with winds around 175 miles per hour, said local news reports. The track was about 12 miles long, and the tornado caused more than 20 deaths.

The image was taken by the Moderate Resolution Imaging Spectroradiometer (MODIS) on NASA’s Aqua satellite on April 28. The tracks were not present before the storm, as shown in the lower image from April 12, 2011.

The large storm system that generated the tornadoes was the deadliest to hit the United States since 1974.