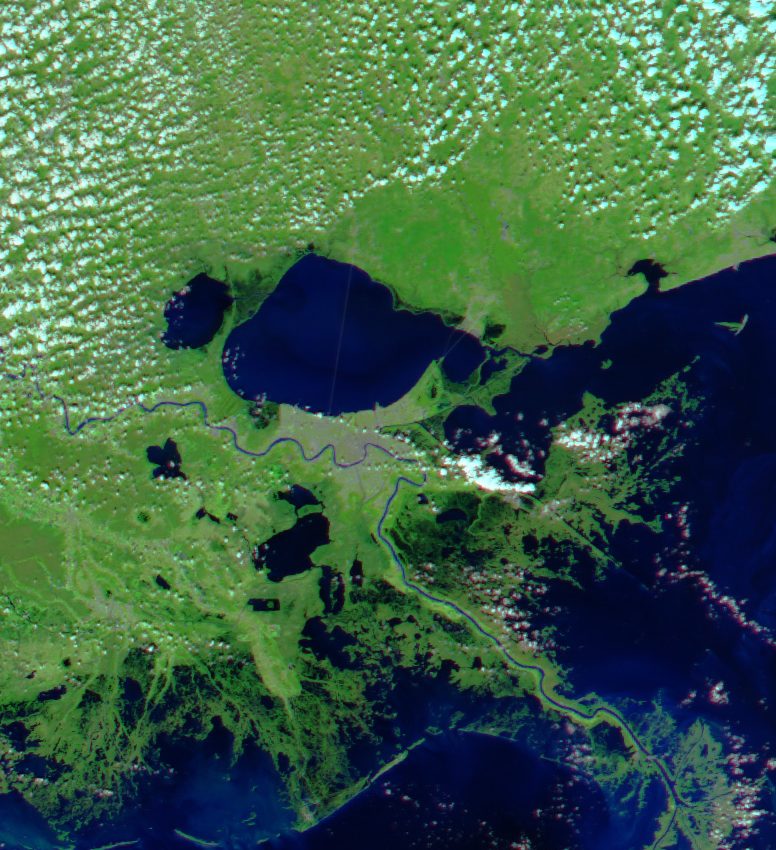 As much as 305 millimeters (12 inches) of rain fell over southeastern Louisiana when Tropical Storm Matthew blew ashore on October 10, 2004. Though little damage has been reported, the Moderate Resolution Imaging Spectroradiometer (MODIS) on NASA’s Aqua satellite detected extensive flooding along the coast and around Lake Pontchartrain, top center. In these false-color images, water is dark blue and black.

The Mississippi River runs from the west through the center of the scene, passing through New Orleans, the grey colored area on the shores of Lake Pontchartrain. The worst of the flooding appears to be southeast of the city and directly east of the Mississippi River where black water covers land that was green on September 28, 2004. Extensive flooding is also visible around Lake Pontchartrain. Directly west of New Orleans a dark circle of water has puddled on the south side of the lake. The lake’s western and northern shores are also dark with flood water. In these images, clouds are light blue and vegetation is bright green. Tropical Storm Matthew Floods Louisiana pretty badly. Therefore leaving a lot of flood damage. Throughout Central and South America, torrential rain produced by Matthew triggered widespread flooding and landslides. Eight people were killed by the storm in Venezuela, and at least 100 people have been confirmed dead throughout Central America and southern Mexico. In Mexico, a massive landslide, roughly 200 ft (61 m) long, buried nearly 300 homes. Initially, officials feared hundreds of casualties, but the impact was much less fatal than expected.