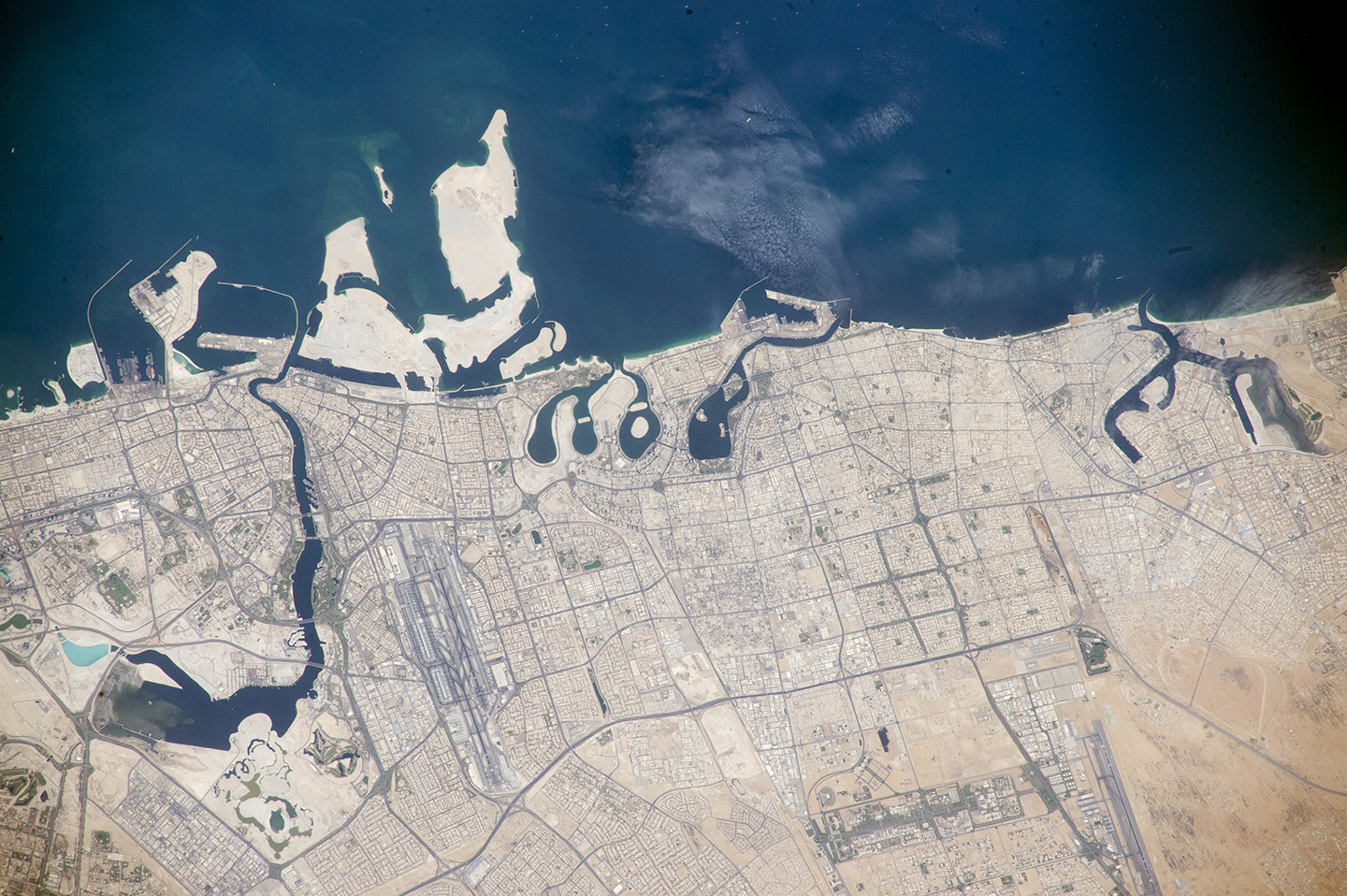 Crews aboard the International Space Station often look for signs of human activity along the coastlines of the Persian Gulf, where a growing Middle Eastern population has been moving. The United Arab Emirates (UAE) is a federation of seven emirates, each under its own monarch. The coastal sectors of three emirates—Dubai, Sharjah, and Ajman—are shown in this photograph. United Arab Emirates, Persian Gulf is a large area in the middle east.

The independence of the emirates is exemplified by the fact that the international airports of Dubai and Sharjah stand just 16 kilometers (10 miles) apart. The urban area known as the Dubai-Sharjah-Ajman metropolitan area (5.2 million people) is the largest in the UAE. At the same time, Ajman is the smallest of the seven emirates (262,000 people).

The largest city in view is Dubai, which has emerged as a business hub of the Middle East. Dubai has one of the most well-known city skylines in the region, boasting the tallest building in the world, the Burj Khalifa. Dubai’s prominence is partly due to the 13-kilometer-long Dubai Creek, one of the longest inlets on the Persian Gulf. For hundreds of years, the creek has attracted shipping from as far as India and East Africa. Major buildings and a large park line its banks. United Arab Emirates, Persian Gulf

The offshore Deira Islands are in the early stages of development. The lack of buildings and street patterns on the islands differs from the dense cityscapes on the nearby mainland. An abstract palm design is envisaged for the islands in the future, similar to one immediately west of this image. A night image of Dubai and the Creek can be viewed here.

Credit: Astronaut photograph ISS045-E-668 was acquired on September 13, 2015, with a Nikon D4 digital camera using a 500 millimeter lens, and is provided by the ISS Crew Earth Observations Facility and the Earth Science and Remote Sensing Unit, Johnson Space Center. The image was taken by a member of the Expedition 45 crew. The image has been cropped and enhanced to improve contrast, and lens artifacts have been removed. The International Space Station Program supports the laboratory as part of the ISS National Lab to help astronauts take pictures of Earth that will be of the greatest value to scientists and the public, and to make those images freely available on the Internet. Additional images taken by astronauts and cosmonauts can be viewed at the NASA/JSC Gateway to Astronaut Photography of Earth. Caption by M. Justin Wilkinson, Texas State U., Jacobs Contract at NASA-JSC.