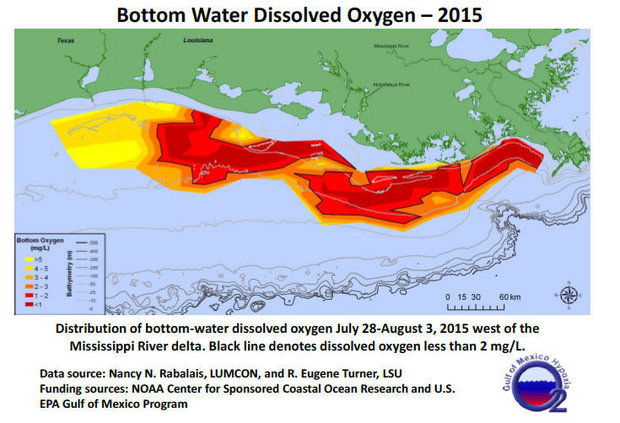 NOAA researchers cite the heavy rains that pounded the middle of the country in July as reason for this summer’s enlarged gulf dead zone.

The low-oxygen “dead zone” in the Gulf of Mexico has grown larger than normal, NOAA scientists say. At last count, the hypoxic blob covered 6,474 square miles.

A dead zone is an area of low to no oxygen water that can kill marine life, should fish or other marine mammals find themselves trapped in depleted waters. While fish and mammals can usually avoid dead zones, slow-moving shellfish and crustaceans are more vulnerable to suffocation.

Of the more than 550 dead zones found in lakes and oceans around the world, the Gulf’s is the second-largest manmade hypoxic zone. The suffocating water is the result of oxygen-depleting phytoplankton blooms encouraged by high levels of nitrogen and phosphorous — agricultural and sewage treatment runoff delivered by the mighty Mississippi River.

As phytoplankton die and sink to the bottom, bacteria feast upon them, sucking more oxygen from the water. The oxygen-deprived water remains in place until storms churn up the water layers and help replenish the dead zone with fresh oxygen.

NOAA researchers cite the heavy rains that pounded the middle of the country in July as reason for this summer’s enlarged dead zone. The latest numbers are the result of a survey undertaken by NOAA scientists.

“An average area was expected because the Mississippi River discharge levels and associated nutrient data from May indicated an average delivery of nutrients during this critical month which stimulates the fuel for the mid-summer dead zone,” Nancy Rabalais, executive director of the Louisiana Universities Marine Consortium (LUMCON), said in a press release.

Rabalais led the recent scientific survey that mapped the fish-killing blob in the Gulf.

“Since the models are based largely on the May nitrogen loads from the Mississippi River, the heavy rains that came in June with additional nitrogen and even higher river discharges in July are the possible explanations for the larger size,” she said.

In addition to rainfall totals, wind, temperature and currents affect the size and movement of the Gulf’s dead zone.

“It would have been even larger without winds out of the west pushing some of the low-oxygen water back to the east,” Rabalais told The Times-Picayune.

Previous research has shown that hypoxic conditions in the Gulf result in habitat loss, species displacement and diminished reproductive abilities for many fish.