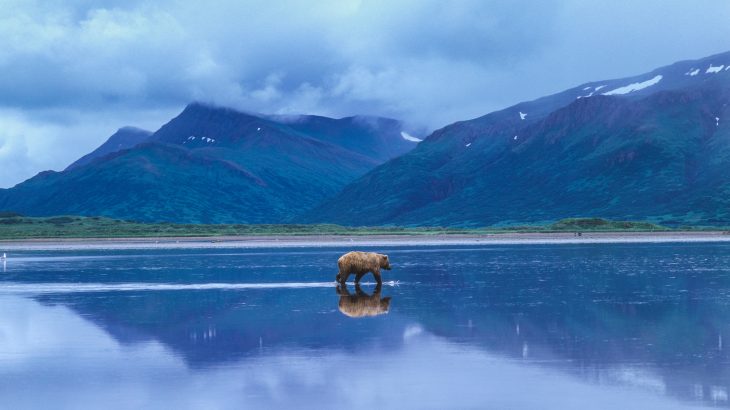 The federal government is the largest landowner in Alaska, with federal lands covering 60% of the state and adding up to a whopping 222 million acres of national parks, forests, wildlife refuges and military land. 80% of Alaska’s public lands are set aside for public use.

For the outdoor enthusiast, all that relatively wild land is mouth watering. Alaska is the land of Kodiak bears, moose, mountains, glaciers, rugged coasts and remote islands. Fishing, hunting, hiking, ice climbing, mountaineering and sailing are all part of the allure of the northern state.

But many living in Alaska don’t find federal lands as appealing. Years ago, when I hitchhiked from Fairbanks to Anchorage and earlier from the tip of the Kenai to Anchorage, I mostly got rides from people sympathetic to federal lands. A military contractor and a ranger from Denali National Park both gave me rides. Despite these people’s friendliness towards the federal government, they told me that many Alaskans do not feel the same. Many harken back to the days when someone could make a living off of fishing, fur trapping, logging and mining without much interference from the federal government, which is often characterized as being out of touch.

Like them or hate them, Alaska’s public federal lands are some of the most iconic and impressive in the United States. Denali National Park & Preserve contains the continent’s highest peak, Mt. Denali, which rises to an impressive 20,310 snowy, glaciated feet above sea level. Kodiak National Wildlife Refuge is home to the largest brown bear in the world and some of the highest population densities of bears as well. Caribou, wolves, musk ox, moose, seals, puffins and impressive numbers of bald eagles all have habitat protected as federal lands in Alaska. You can see glaciers, wild rivers, tundras in mountains on federal land there.

Despite the beauty and appeal of Alaska’s federal lands, the federal government that protects them may soon give up on them, instead caving to the short sighted desire to cash in on ‘natural resources’ rather than protections for nature. HuffPost reported earlier this month that the Trump administration is planning to transfer ownership, sell or open up to extraction 28.3 million acres of public land in Alaska. This the overall impact of nine separate actions under Trump, including his widely publicized push to open the Alaska National Wildlife Refuge to drilling. As Earth.com reported last month, the Trump administration is also pushing to allow new logging in the Tongass National Forest.

A directive from Donald Trump instructed the Secretary of Agriculture to exempt the 16.7 million acre national forest from nearly 20 year old logging restrictions. This move alone could damage more than half of the world’s largest intact temperate rainforest. This is moving against the trend in Alaska and the US as a whole.

In 2016, the US Forest Service finalized a plan to phase out old growth logging in Tongass within ten years. Additionally, 5.7 million acres have been set aside by Congress as wilderness in Tongass and would remain protected. Timber provides Alaska with less than 1% of their jobs yet Governor Dunleavy and Senate Republican Lisa Murkowski have pushed the Trump administration to exempt Alaska from the roadless rule that forbids new roads (except where the Forest Service has a specific project) and bans commercial logging.

The changes could have wide reaching consequences beyond just the forest itself. Approximately 40% of the wild salmon that migrate further down the west coast spawns in Tongass. Other changes in Alaska public land policy attempted by the Trump administration are less high profile than the Tongass or Alaska National Wildlife Refuge.

In June, Assistant Secretary of the Interior Joe Balash signed directives revoking public land orders, potentially leading the way to opening up 1.3 million acres of Bureau of Land Management (BLM) land in Alaska to development. Currently, the BLM manages 70 million acres of land in Alaska, about 19% of the total state of Alaska. In keeping with the common goals between the president and governor Dunleavy of Alaska, there are more actions being taken to allow public lands to be turned over to private or state interests.

In July, a land exchange agreement was signed allowing a road to be built through Izembek National Wildlife Refuge. King Cove Corp, an Alaska Native Corporation, agreed to give land of equal value in exchange for a road through the wildlife refuge, which they say would allow land access to Cold Bay and an all weather airport. Environmentalists opposed the exchange, citing the potential damage to brown bears, seabirds, caribou and salmon at the tip of the Alaska Peninsula where the refuge is located, mainly to protect waterfowl habitat. The road would be placed on an isthmus as narrow as three miles in some places with Izembek Lagoon on one side holding one of the largest eelgrass beds in the world. The lagoon is an important food source for endangered ducks, geese and other waterbirds in the area.

The land swap agreement was originally Secretary of the Interior Ryan Zinke but was later ruled illegal in a US District court. A final decision on whether the road will be built or not will likely come after a long legal battle. The fight over public lands and their place in America, especially in places like Alaska, will continue to be contentious unless how we live changes significantly.

The Center for American Progress that analyzed the large scale land liquidation ongoing in Alaska points out that the state is more dependent than any other on oil and gas revenues. Fossil fuels have made Alaska a lot of money, and it’s the only state that not only doesn’t have income tax but also pays residents a dividend from oil and gas just for living in the state.

The other side of the issue of course is that oil and gas and other extractive industries have enormous influence on Alaskan policy. In the past, the ownership of lands by the federal government safe guarded against the wholesale development of Alaska, saving some of the best and most beautiful lands and species for all of us. That might be changing fast.