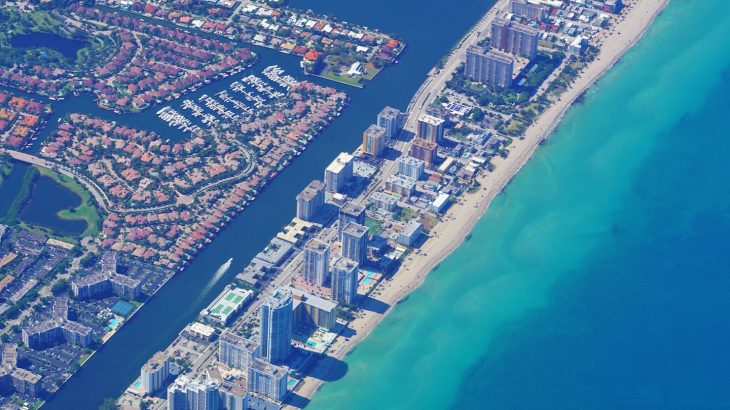 When the Intergovernmental Panel on Climate Change (IPCC) published its fifth assessment in 2013, the report estimated that sea levels will rise by 52 to 98 centimeters before the end of this century at the current rate of emissions. Even if governments were to “achieve drastic emissions cuts,” the experts projected that sea levels will still rise by up to 54 centimeters.

Since the report was published, however, a growing collection of research suggests that these estimates were too conservative. Based on the increasing instability that has been observed across the West Antarctic and Greenland ice sheets, one study concluded that the effects of climate change could result in a global average of more than two meters of sea level rise by the end of the century.

“For 2100, the ice sheet contribution is very likely in the range of 7 – 178 centimeters but once you add in glaciers and ice caps outside the ice sheets and thermal expansion of the seas, you tip well over two meters,” said study lead author Professor Jonathan Bamber from the University of Bristol.

“To put this into perspective, the Syrian refugee crisis resulted in about a million refugees coming into Europe. That is about 200 times smaller than the number of people who would be displaced in a 2m sea-level rise.”

Thermal expansion, or the swelling of seawater as it warms, is the second largest contributor to sea level rise. This phenomenon occurs as the ocean absorbs the atmospheric heat associated with greenhouse gas emissions. With this in mind, sea levels will continue to rise at accelerated rates.

According to NOAA, eight of the 10 largest cities in the world are near a coastline. In the United States, nearly 40 percent of the population is located in highly-populated coastal areas, where the sea level plays a major role in flooding and shoreline erosion. Because sea level rise is not evenly distributed, the impacts have already become more intense in some areas compared to others.

A 2018 study from the Woods Hole Oceanographic Institution (WHOI) revealed which regions along the East Coast of the United States have been hit the hardest. Since the beginning of the 20th century, New York City and Miami have experienced about one foot of sea level rise. In the same time frame, coastal communities across the Outer Banks of North Carolina and the Chesapeake Bay area of Virginia have faced a foot and a half of sea level rise.

By combining sea level measurements and GPS satellite data with complex geophysical models, the WHOI researchers determined that the primary reason for variation in sea level rise across the East Coast is a phenomenon known as post-glacial rebound. Areas of land that were weighed down by ice sheets thousands of years ago were able to rebound as the ice disappeared, causing the surrounding land to sink in a see-saw effect. But the biggest factor at play, the influx of water from melting ice sheets and glaciers, makes it a challenge to project future sea levels on the Atlantic Coast.

“Post-glacial rebound is definitely the most important process causing spatial differences in sea level rise on the U.S. East Coast over the last century. And since that process plays out over millennia, we’re confident projecting its influence centuries into the future,” explained study lead author Chris Piecuch. “But regarding the mass redistribution piece of the puzzle, we’re less certain how that’s going to evolve into the future, which makes it much more difficult to predict sea level rise and its impact on coastal communities.”

Experts have determined that a slowing Gulf Stream, fluctuations in a major North Atlantic weather pattern, and the effects of El Niño climate cycles are also leaving cities on the East Coast particularly vulnerable. The unpredictable nature of rising seawater has led to increasing concerns about flooding, which has become much more frequent in the Mid-Atlantic from North Carolina to New Jersey.

Cities including Norfolk, Baltimore, and Charleston are already experiencing rates of tidal flooding, also known as “sunny day flooding,” that were not expected to occur for decades. But research suggests that some cities have much more to worry about than tidal flooding on a clear day. Under the worst-case scenario of climate change, cities in low-lying coastal regions could be completely submerged underwater.

New Orleans, for example, lies up to 15 feet below sea level. A 2016 study by NASA found that some parts of the city are actually sinking at a rate of two inches per year, which means that New Orleans runs a very high risk of being underwater by the end of the century. Atlantic City, Charleston, Boston, and New York City are also at risk of becoming at least partially submerged by 2100.

A report from the Union of Concerned Scientists revealed that Miami is another city that is severely threatened, with 12,000 homes in Miami Beach in danger of chronic flooding over the next three decades. “Miami as we know it today – there’s virtually no scenario under which you can imagine it existing at the end of the century,” environmental author Jeff Goodell told the Business Insider.

The authors of a special 2018 report from the IPCC said that the good news is that some of the actions that are urgently needed to limit global warming are already underway, but these actions must be accelerated. “The decisions we make today are critical in ensuring a safe and sustainable world for everyone, both now and in the future,” said co-author Debra Roberts. “This report gives policymakers and practitioners the information they need to make decisions that tackle climate change while considering local context and people’s needs. The next few years are probably the most important in our history.”