An appreciation of the praying mantis • Earth.com 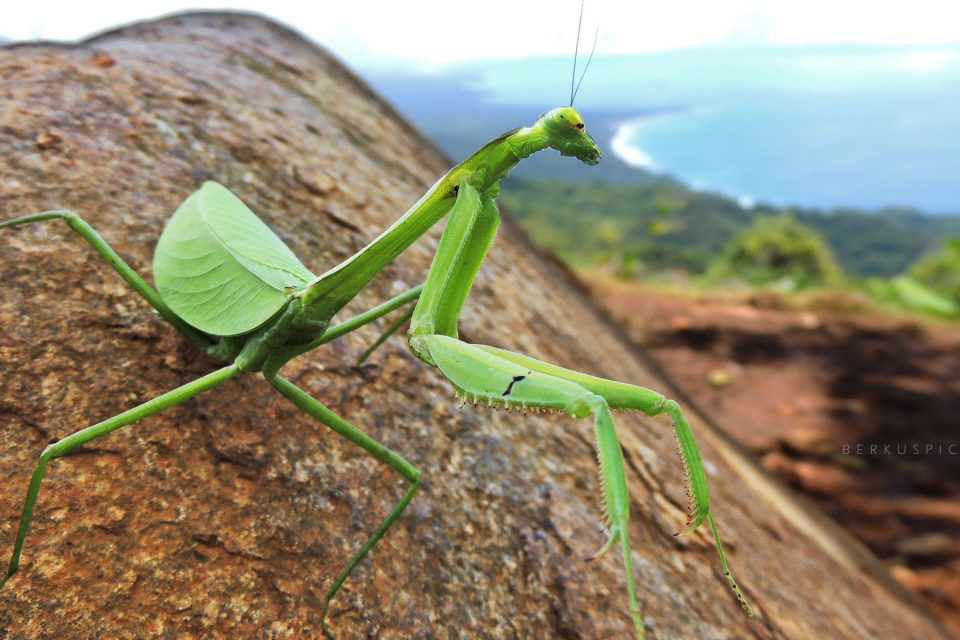 An appreciation of the praying mantis

I spotted it sunning itself atop a milkweed next to my grandmother’s vegetable garden. I’d heard tales of the mantises frequenting her rural homestead, but had never seen a specimen in the flesh. And there one was, fearlessly surveying the tomatoes and cucumbers with its glistening compound eyes.

My biology teacher mother had taught me how to handle insects, so, gingerly, I stalked my way to the edge of the weed patch and made a grab for it. I gently pinched the thorax and triumphantly brought the creature inside to show my family. I will never forget the surprising strength of its raptorial forelegs as they clamped down on my fingers, nor the strange sensation of its plump, silky abdomen pulsing against my hand. It was a gravid female, ready to deposit its ootheca, or egg case. After displaying her to my delighted relatives, I released her and she clambered away into the recesses of a shrub.

I was a boy of perhaps 8 or 9 at the time. And my fascination with these insects has only intensified since. I’m hardly alone. These creatures have held thrall over the human imagination for time immemorial, perhaps matched only by the butterflies, bees, and ants in their significance to human observers. Their evolutionary history far predates our own. 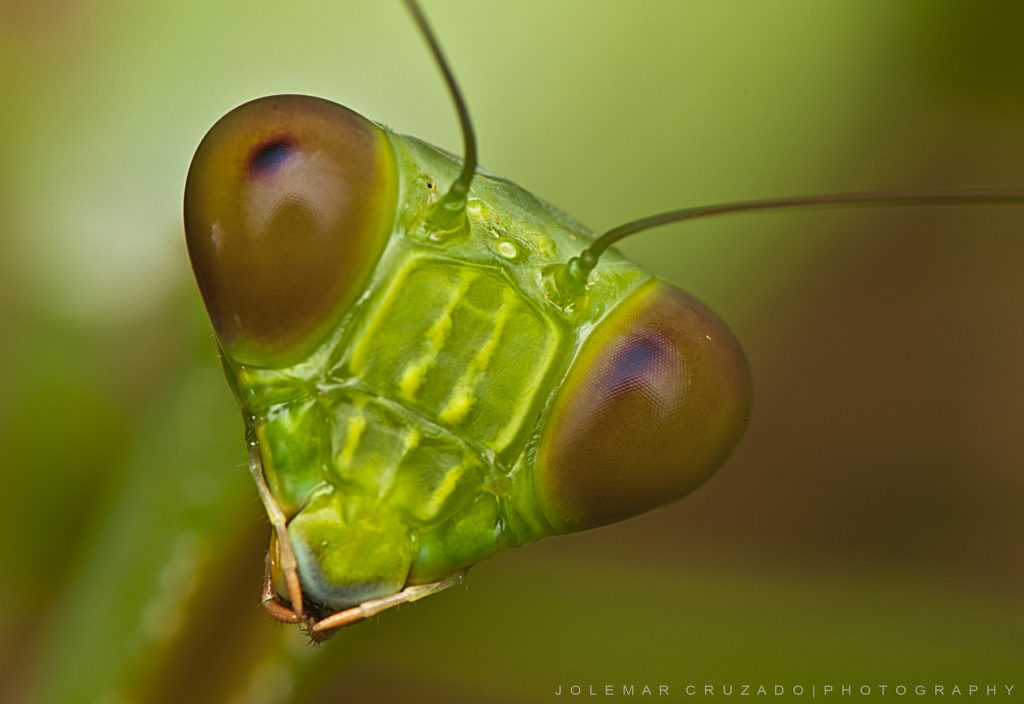 The ancient rock art of the Southern African San people depicts half-human, half-mantis creatures, some of them perhaps representing a trickster god analogous to Anansi. Mantises were depicted in the ancient Egyptian Book of the Dead as deities, Bird-flies, who led souls to the underworld.

Similarly, they appeared in ancient Sumerian texts as a sort of necromancer figure. They merited mention in the idylls of the Greek Theocritus and in fact mantes is the Greek word for prophet. These beautiful arthropods also graced the surfaces of Roman coins, and fought in arenas like cocks for the amusement of the Chinese. Chinese proverbs are full of references to mantises and their undaunted courage in the face of larger adversaries. Anyone who has seen the remarkable wing displays of threatened mantids can attest to the veracity of this characterization. They certainly don’t go quietly into that good night if you make the mistake of picking them up.

Their peculiar grace even inspired a 1976 ballet and they were a major motif in Surrealist art. In contemporary culture, they’ve become symbols of the femme fatale due to the females’ tendency to eat their mates. To whit: Buffy the Vampire Slayer fans will remember one of Xander’s more unfortunate crushes, a mantis demon posing as an attractive substitute teacher. This has in turn made them the subject of feminist critique. Indeed, who can blame the creatures for sating themselves one last time before they lay their now-fertile eggs and expire? Perfectly natural. 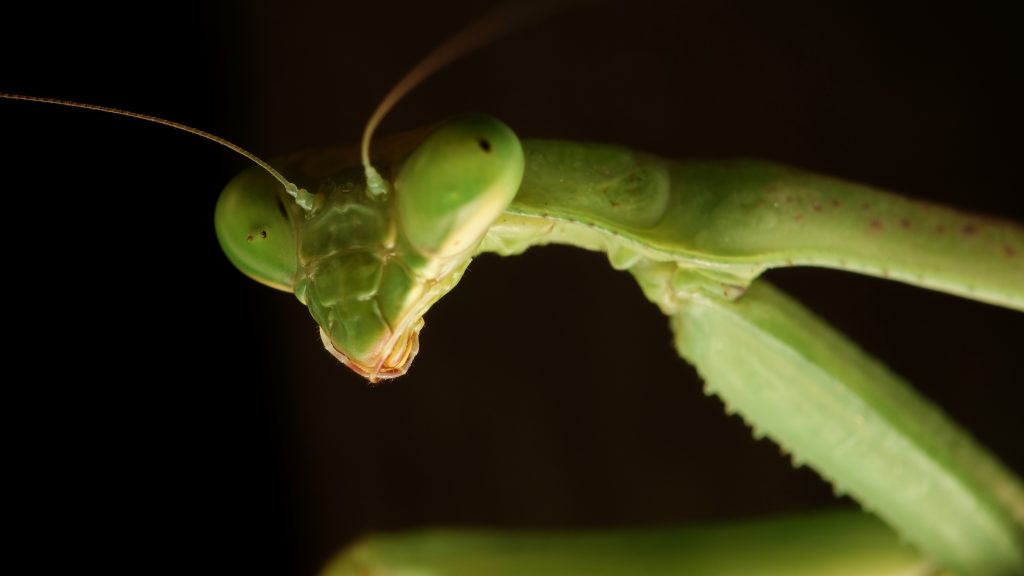 The real-life habits of these creatures are no less fascinating than those of their mythological counterparts. With some 8 families comprising more than 400 genera and some 2,300 species, these insects have colonized every continent except for Antarctica. The largest, the giant stick mantis (Ischnomantis gigas) of northern Africa, reaches lengths of over 7 inches while the smallest, the tiny Bolbe pygmaea of Australia is less than half an inch long. They have adapted to environments ranging from deserts to grasslands to forests. They are most diverse in the tropics, though temperate areas don’t lack for mantises. In the United States, the best known of the approximately 20 species native to the North American continent is the Carolina mantis (Stagniomantis carolina), a modest, brown species. It is somewhat less common than it was following the introduction of the Chinese mantis (Tenodera aridifolia sinensis) and European mantis (Mantis religiosa) c. 1890. These larger species are thought to outcompete the smaller native and the Chinese species is the one most gardeners spy perched atop their plants, especially in eastern regions. Litaneutria minor, a smaller species, ranges all the way into Canada.

The tropical species can be spectacular. The flower mantises, which mimic blossoms, come in shades of pink and white. Interestingly, they were found to be generalist mimics, not aping one particular species of flower or another, but resembling a range of species just closely enough to take advantage of the pollinators visiting them. The bark mantises defy the sedentary habits of their relatives and skitter around the tree trunks that they call home in a manner reminiscent of their relatives the cockroaches. Some are even iridescent. The young of many species mimic ants, a fascinating instance of Batesian mimicry in which they avail themselves of the aversion of many predators to ants due to their chemical defenses. They themselves are in fact quite edible and retain their ant-like characteristics only until they reach a stage of maturity in which their own formidable forelegs are adequate deterrents.

Their remarkable compound eyes, which each boast some 9,000 ommatidia, allow them to see in three dimensions. These capabilities are bolstered by the presence of three ocelli, or simple, one-lensed eyes, on their foreheads. The ocelli are often larger in males and may be totally absent in females for reasons unknown. Their acute vision supplements a remarkable reflex system, which allows them to extend their forelegs and grasp prey in an astounding 50 thousandths of a second.

Their strangely humanoid arms are, however, not unique among insects. Raptor-like claws have evolved in at least three others groups of insects, including the mantispids, the assassin bugs, and some flies, testifying to the efficacy of this mode of prey capture. The rapacious predatory tendencies of the mantises have brought them into the news of late due to their tendency to stake out hummingbird feeders and devour the hapless sprites as they go in for a sip of nectar. The phenomenon of invertebrate predation on vertebrates is not new, though. Their tendency to devour amphibians and lizards was remarked as early as 1838. And they’ve been spotted dining on tiny rodents, and even baby turtles as well. One study found that 24 species of bird had made their way into mantis gullets worldwide. A recent video even documented the ability of mantises to fish.

Of course, the most famous dietary tendency of the mantises is cannibalism. Specifically: sexual cannibalism. Females are known to prey on their mates. Once thought to be restricted to laboratory settings in which the male could not escape, this habit has since been observed in the wild. One study found that 31% of male European mantises were eaten by their baby mamas.

Male mantises have thus evolved specific patterns of approach that reduce their chances of being eaten. It was once proposed that females specifically released mating hormones to attract males for consumption, essentially catfishing the unwitting studs. This has, however, been experimentally disproven. Despite their intimidating claws, mantises are themselves prey for many animals, from birds to alligators. Like their roach relatives, they possess a unique cercal system that allows them to detect air currents and avoid approaching threats. On the wing, they have been seen executing fighter-pilot-worth dives in their attempts to escape bats.

The fragile nymphs dangling from their unique chitinous threads as they emerge from their ootheca hardly presage these fantastical abilities. While they may not mature into trickster gods or underworld guides as the ancients believed, these sui generis insects are sure to maintain their status as one of the marvels of the insect world.