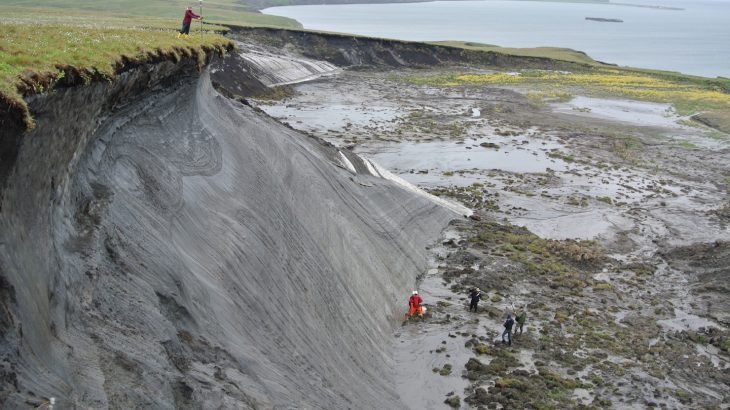 A new study from the Alfred Wegener Institute (AWI) has found that thawing permafrost in the Arctic could intensify global warming. The analysis of sediment samples from the eastern coast of Russia showed that Arctic permafrost loss at the end of the last glacial period triggered abrupt spikes in atmospheric carbon dioxide (CO2).

A positive feedback loop between global warming and the release of CO2 from natural sources threatens to intensify future global warming. By studying climate records of the past, scientists can better assess the likelihood of such a threat.

The team led by AWI demonstrated that a rapid rise in sea levels thousands of years ago released massive amounts of CO2 from permafrost.

Some of the ground that makes up permafrost has been frozen since the last glacial period 20,000 years ago or even longer, and extends up to several hundreds of meters beneath the surface of the Earth. The permafrost soils preserve huge quantities of dead plants and other biomass, along with the carbon dioxide and methane that are contained in them.

While it was previously established that there were sudden spikes in CO2 levels around 11,500, 14,600 and 16,500 years ago, the driving forces have remained unclear. The research team, led by AWI geologists Dr. Maria Winterfeld and Dr. Gesine Mollenhauer, set out to investigate in the Sea of Okhotsk along the eastern coast of Russia.

“Originally we assumed that at the time, the vast Amur River carried tremendous quantities of plant material from the hinterland, which microorganisms in the water then broke down into carbon dioxide. So we collected sediment samples from the sea floor, which we then analyzed.”

The researchers were surprised to find that there was evidence of plant remains deep in the sediment that were several thousands of years older than the surrounding deposits. The team determined that they must have originated in extremely old permafrost that had abruptly thawed. Particularly large amounts of these plant remains were washed into the sea 11,500, 14,600 and 16,500 years ago.

The experts were able to determine that there was particularly intense melting of the ice sheets during these time periods, which led to extreme sea level rise of up to 20 meters within a few centuries.

“We assume that this resulted in severe erosion of the permafrost coast in the Sea of Okhotsk and the North Pacific – a phenomenon that we can observe in the Arctic today.””

This allowed large amounts of ancient plant remains to enter the ocean, which were broken down into CO2 or deposited into the ocean floor.

Today, the Arctic’s permafrost coast is eroding severely due to rapid warming, which could have similar results.

Dr. Mollenhauer said, “Our findings show that this coastal erosion is an important process, but to date it has not been sufficiently considered in climate models. Such effects need to be included in future models.”