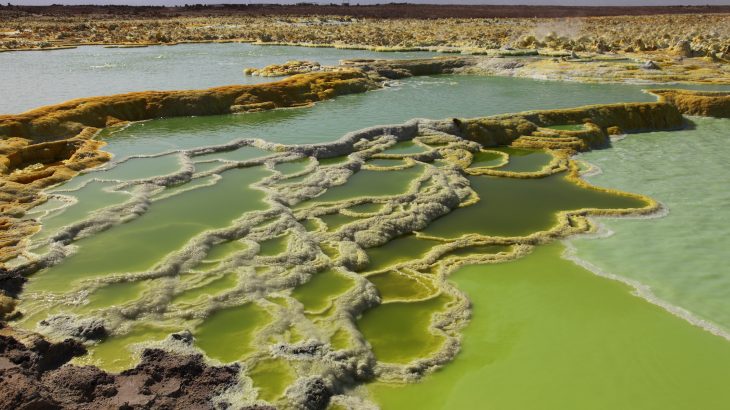 Ethiopia’s Dallol hot springs, located near the Dallol volcano and Assale salt plain, is one of the most extreme environments on Earth. Now for the first time, researchers have discovered evidence of ultra-small bacteria living in the hot springs.

The Dallol hot springs are highly acidic and saline and can reach temperatures of nearly 230 degrees Fahrenheit.

In the first study of its kind, an international team of researchers collected and analyzed samples from the Dallol volcano and discovered ultra-small bacteria thriving in salt deposits.

After the samples were collected in 2017 during a field trip to the Dallol volcano, the researchers used electron microscopy, chemical analysis, and DNA sequencing to analyze them.

The team identified a strain of Nanohaloarchaeles Order bacteria in samples that were collected from a salt chimney created by highly saturated and acidic water.

“This is an exotic, multi-extreme environment, with organisms that need to love high temperature, high salt content and very low pH in order to survive,” said Dr. Felipe Gómez, the leader of the research.

Measuring just 50 to 500 nanometers in diameter, the bacteria is 20 times smaller than most other bacteria.

The Dallol region is unique in that the hot springs are heated and enriched by the shallow magma reserve that lies beneath the volcano. The evaporated deposits from the nearby Assale salt plains created a colorful landscape of salty technicolor columns, ridges, and rocky formations.

Silver chloride, zinc, iron sulfide, and manganese dioxide all contribute to the high salinity of the water.

The Dallol hot spring environment closely resembles what conditions were like during the early years of Mars, and the presence of thriving life in the hot springs yields important implications for future Mars research.

“Deep investigation of the characteristics of this amazing site will improve our understanding of the limits of life on Earth and inform our search for life on Mars and elsewhere in the Universe,” said Barbara Cavalazzi, a lead author of the study.