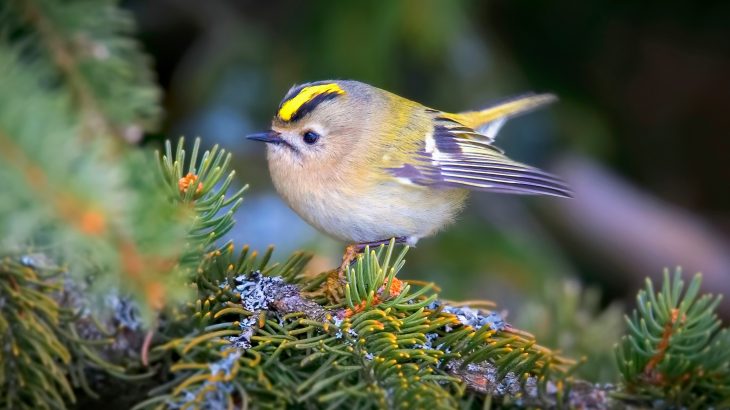 Birds grow thicker down feathers to survive the cold conditions in high elevations, according to a new study. The researchers examined feathers across 249 species of Himalayan songbirds using a collection of bird specimens at the Smithsonian National Museum of Natural History.

To regulate their body temperature, birds grow a layer of fluffy down insulation between their bodies and their outermost feathers.

The research highlights the importance of feathers in helping birds adapt to their environment, and suggests that adding down may be a common strategy among songbirds. The findings may ultimately help researchers predict which birds are most vulnerable to climate change by simply studying their feathers.

“The Himalayas are seeing some of the fastest rates of warming on Earth,” said study lead author Sahas Barve. “At the same time, climate change is driving an increase in the frequency and intensity of extremely cold events like snowstorms. Being able to accurately predict the temperatures a bird can withstand could give us a new tool to predict how certain species might respond to climate change.”

During a frigid morning of field work in the Sho-kharkh forest of the Himalayas, Barve observed a tiny goldcrest dashing across the treetops. He wondered how this little bird, which weighed about as much as a teaspoon of sugar, was able to thrive in frigid conditions. Barve set out to investigate whether Himalayan birds wear their own version of down jackets.

While previous studies suggested that birds from colder habitats had extra down feathers, Barve said this is the first study to analyze this pattern for such a large number of species in cold environments and across 15,000 feet of elevation.

The researchers used a microscope to image the chest feathers of 1,715 specimens from the high-altitude Himalayan Mountains. The team analyzed the photos to determine how long each feather’s downy section was relative to its total length.

The analysis revealed that the birds from the highest elevations, as well as the smallest birds, tended to have the highest proportion of down on their body feathers. Small birds had down feathers that were three times as long as the largest birds, while high-elevation birds had up to 25 percent more down.

“Seeing this correlation across so many species makes our findings more general and lets us say these results suggest all passerine birds may show this pattern,” said Barve. “And we never would have been able to look at so many different species and get at this more general pattern of evolution without the Smithsonian’s collections.”

Study co-author Carla Dove said she was excited to work together with Barve to use the Smithsonian’s collections in a new way.

“Sahas looked at more than 1,700 specimens. Having them all in one place in downtown Washington, D.C., as opposed to having to go to the Himalayas and study these birds in the wild, obviously makes a big difference. It allowed him to gather the data he needed quickly before the COVID lockdowns swept the globe, and then work on the analysis remotely.”

According to Dove, the potential to use these results to predict how some birds will cope with climate change demonstrates the value of museum collections.

“We have more than 620,000 bird specimens collected over the past 200 years waiting for studies like this. We don’t know what our specimens will be used for down the line; that’s why we have to maintain them and keep enhancing them. These specimens from the past can be used to predict the future.”

The study is published in the journal Ecography.