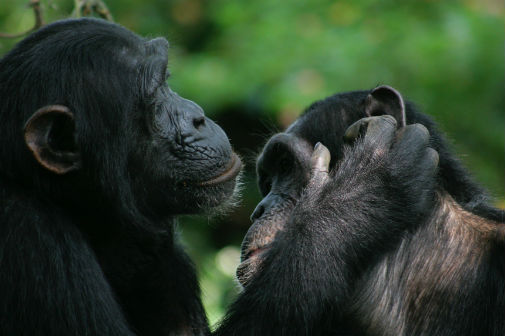 Bonobos and chimpanzees are two species of great ape that are closely related. The two deviated into separate species roughly 1-2 million years ago. But it has been known for a while now that both species use gestures to communicate in a number of different situations and for a variety of purposes. However, new research has revealed that many of these gestures actually share the same meaning.

Researchers from the Universities of York, St. Andrews, and Kyoto first defined the meanings behind these gestures by analyzing the reaction a gesture elicits from the receiving individual. With bonobos, they would determine whether the bonobo who gestured was “satisfied” with the reaction.

Through many observations such as this one, the research team systematically defined the sets of meanings of 33 bonobo gesture types, and compared them to previously known gesture meanings from chimpanzees. They found that many gesture meanings are shared by both species, from which they postulate that they may also have been share by our last common ancestor.

“The overlap in gesture meanings between bonobos and chimpanzees is quite substantial and may indicate that the gestures are biologically inherited,” says Dr. Kirsty Graham, a research associate at the University of York’s Department of Psychology. “In future, we hope to learn more about how gestures develop through the apes’ lifetimes. We are also starting to examine whether humans share any of these great ape gestures and understand the gesture meanings.”