Take my kid: Brood parasitism in the animal kingdom • Earth.com 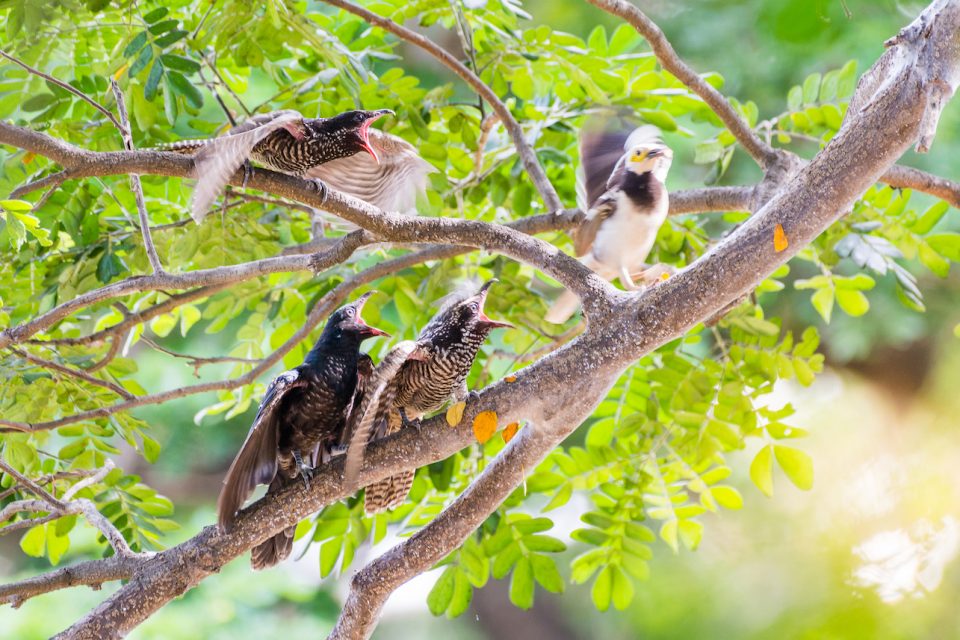 Take my kid: Brood parasitism in the animal kingdom

“For the world’s more full of weeping than you can understand.”

The refrain of W.B. Yeats’s 1889 poem “The Stolen Child” entices the children kidnapped by fairies to embrace their illicit heritage by suggesting that the human world from which they have been taken is one of misery and strife. Stolen from their parents, they are sheltered from the woes of humanity by the magic of their supernatural surrogates. Legends of changeling children abound in world mythology.

Most of them are menacing. While fairies and demons conspire to keep their human charges, lifted from their cradles in the dead of night as their parents slumber, the vicious creatures left in their place torment the humans whose children were abducted. Modern scholarship has suggested that children thought to be changelings were unhealthy due to congenital disorders that made them fussy and unpleasant to their parents. Sickly and irritable children were often referred to as changelings and were sometimes subjected to brutal and inhumane tests intended to prove their humanity, including placing them on hot griddles.

Changelings in the animal world are no less savage than their mythological human counterparts. Perhaps even more so. So, too, the reactions of the duped parents.

Brood parasitism, a phenomenon in which animals compel other animals, related or not, to raise their offspring, it not uncommon. These changeling eggs are incubated, hatched, and raised to maturity by unwitting parents compelled by instinct to care for the young that appear in their nests. This practice has obvious evolutionary benefits to the parasitic species. By passing off the costs of raising young to another animal, they save enormous amounts of energy. The strategies that they employ range from the relatively benign, in which eggs are simply laid in the nests of a relative or another species and there raised to fledging, as in some ducks (Anatidae) and cowbirds (Molothrus), to the brutal, in which eggs are thrown from the nest (cuckoos; Cuculidae) and freshly hatched babies stab their adoptive siblings to death (honey guides; Indicatoridae and Cuculidae) with specially adapted beaks.

While brood parasitism occurs in insects, fish, and even amphibians, it is most prevalent and best studied in birds. Some 1-4% of all bird species reproduce by laying their eggs in either the nests of conspecifics or those of unrelated species of birds. Six families of birds exhibit this behavior. The Anatidae (ducks), Cuculidae (cuckoos), Hirundinidae (swallows), Icteridae (blackbirds, notably cowbirds), Indicatoridae (honey guides) and Viduidae (indigo birds and whydahs) all contain members who are facultative, meaning occasional and opportunistic, and/or obligate, meaning necessarily, brood parasites. Of the 430 species identified in one study, 96 are obligate brood parasites.

That is to say: some species pop an occasional egg into a neighbor’s nest in the hopes of increasing the chances of their genes being passed on while still raising their own broods, and others make no effort at all to raise their own young, relying solely on the work of other birds to support the changelings they foist upon them. Nearly all brood parasites are altricial; that is, their young are defenseless and featherless upon hatching. Ducks, geese, and coots are the only only precocial birds to parasitize nests and only one species, the black-headed duck (Heteronetta atricilla) of South America, is an obligate parasite.

The strategies used by brood parasites are multifarious. Some have evolved to produce eggs that resemble those of their hosts. The eggs of parasites often have thick shells resistant to puncture by confused parents and they often hatch earlier than the host’s own eggs, giving the interloper an advantage. The nestlings of some species of cuckoos have evolved depressions in their backs that aid them in scooping up the eggs of their foster parents and dumping them over the side of the nest, effectively eliminating all competition.

The young of Indigo birds, which parasitize several finch species in Africa, have evolved to mimic the markings found on the insides of the mouths of their host species, making them more convincing changelings. The adults of a number of Old World cuckoos have evolved to resemble raptors such as sparrowhawks. Their barred underparts and flight patterns resemble the predators and are thought to aid the cuckoos in frightening host species away from their nests long enough for the deposition of a changeling egg.

This has also been demonstrated in New World cuckoos. One might think that being raised by parents of another species would make it difficult for the parasite to learn the behaviors and calls of its own species. Indeed, some parasites do grow up mimicking their surrogate parents’ calls. The brown-headed cowbird (Molothrus ater) has found a work-around: before fully fledging, it sneaks away from its host nest at night and socializes with other cowbirds and there is some suggestion that cowbird parents may watch from a distance as their young are reared.

Though the credulity of host species is sufficient for brood parasitism to have evolved multiple times, even putting parasitic species at lower risk of extinction, not all host species take it lying down. Superb fairy-wrens (Malurus cyaneus) appear to teach their babies a password used during feeding while they are still in the egg; young of the Horsfield’s bronze-cuckoo (Chalcites basalis) are fed less because they do not learn the password. Black-collared barbets and weavers gang up on and kill honeyguides and cuckoos respectively. Mangrove gerygones (Gerygone laevigaster) simply toss little bronze cuckoo (Chalcites minutillus) changelings to the ground. In rare instances, as in the spotted cuckoos that parasitize carrion crow nests, the parasite may in fact be advantageous. Cuckoo nestlings spray predators with a foul-smelling substance and thus protect themselves and the carrion crow nestlings.

Brood parasitism appears to be far more common in Old World birds. In the Americas, only cowbirds, some cuckoos, and a few species of ducks rely on this reproductive strategy. In Europe and Asia, they are far more prevalent. One 2013 study intriguingly posits that the prevalence of cooperative breeding in Old World birds evolved as a defense against brood parasitism. Cooperative breeding, in which birds nest colonially and sometimes share the care of young, is far more common in the Old World, correlating to the higher incidence of brood parasitism.

The obvious defense benefits provided by larger numbers of vigilant birds on the lookout for possible nest parasites correlate to the larger numbers of birds looking to pawn their offspring off on unsuspecting hosts. One theory about New World cowbirds claims that their evolution toward parasitism was a result of their itinerant plains lifestyle; they followed the buffalo and thus dispensed with the sedentary period required of breeding birds.

In fish, the best known brood parasite is the cuckoo catfish (Synodontis multipunctatus), which cleverly inserts its eggs amongst those laid by mouth-brooding cichlids, which then care for the young after they hatch. Insects such as burying beetles (Necrophorus) also pawn their larvae off on other beetles. A particularly insidious case occurs in some species of Peruvian poison frogs (Dendrobates), which dump their tadpoles in pools containing smaller tadpoles, which are then summarily devoured by the new arrivals.

Though in healthy ecosystems, a balance is struck, in fragmented areas of the United States, brown cowbirds have begun parasitizing the nests of species unable to withstand this additional pressure, such as Kirtland’s warblers (Setophaga kirtlandii), driving them toward extinction. Despite such instances, one can’t help but admire the devious evolutionary strategems of parasitic birds and the enfants terribles they leave, like living time bombs, in the nests of their hosts.